A2200 Beginnings – Ozzy and the Leveller

From Ashes to Alphas 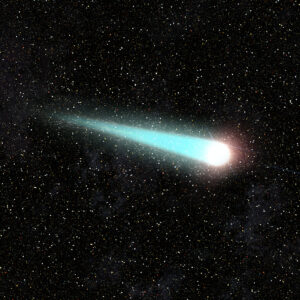 Towards the end of 1970 astronomers detected a rouge comet named Lee-Kosolov entering out solar system. Early predictions established that once it swung around the sun, on its return journey it would pass close to Earth’s orbit resulting in a near miss.
However as is passed around the opposite side of the sun at its perihelion, the unthinkable happened and the comet broke into four and at the same time its orbital track changed putting all four pieces on a collision course.
On the 17th April 1972 the first of those pieces struck the planet. Due to the orbital path of the comet and the rotation of the planet the four chunks of rock and ice would not arrive at the same location but instead strike in four separate areas.
The first to be hit was San Francisco, followed by New York then Paris before the biggest bulk of the comet slammed into Japan.
Each of the cities were completely levelled with a force of a nuclear explosion but Japan would end up being obliterated altogether.

Thousands had already been evacuated from the impact zones but despite this millions would end up dying either directly from the blasts or as a result of the secondary effects that followed.
The shock waves that levelled hundreds of square miles outside of the estimated impact zones and those that survived that had to endure further destruction in the form of tsunamis. In the days and weeks that followed, dust ejected into the atmosphere spread until it engulfed the entire planet. 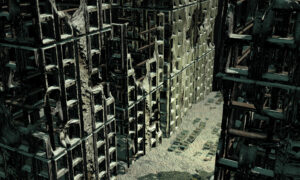 The various governments had of course put contingency plans in place but they were still woefully unprepared. Line of communication collapsed since the impacts has created a massive EM pulse which rendered any operating electronic equipment completely useless, essentially resetting technology back a century.
With the dust cloud creating a perpetual gloom, many species of animal and plant life were lost, unable to adapt to survive. Mankind however would endure. 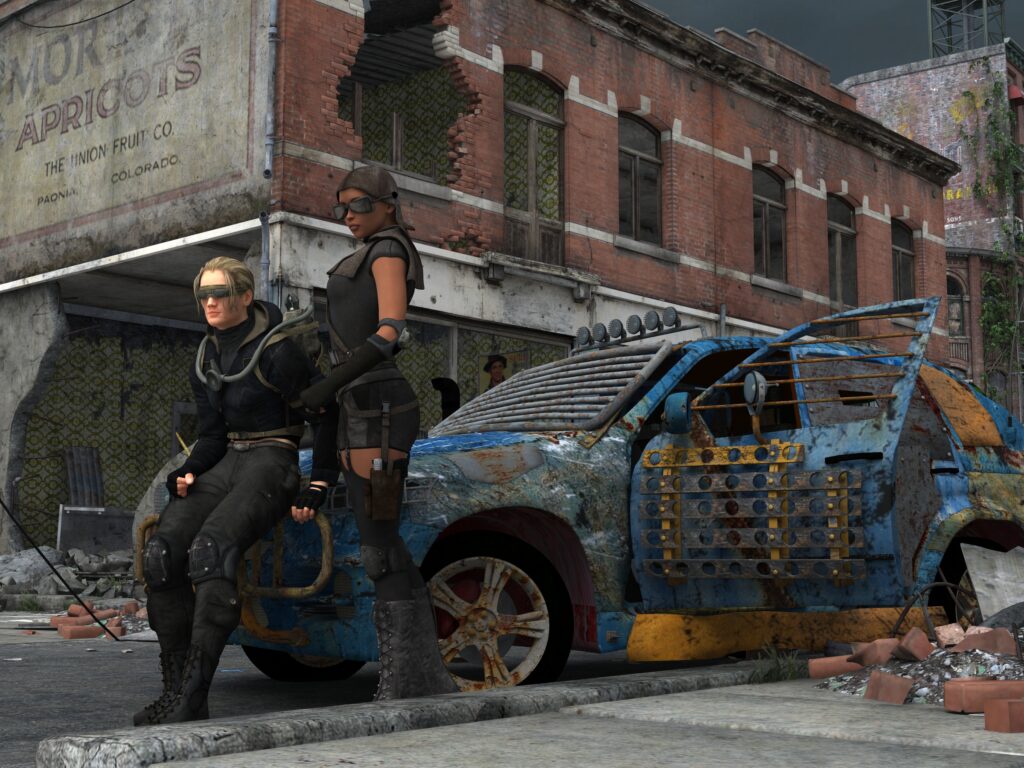 In the early years as governments tried to struggle to create some sort of order out of the chaos most people were left very much to fend for themselves. Those that lived near the devastation zones regressed to an almost tribal lifestyle, picking through the remnants of shattered urban landscapes in the hopes of finding something to give them the means to live another day.
Whilst in the early years since the comet strike the future looked bleak for the survivors as the decades past, people and society began to get organised. Governments rose from the ashes and finally took charge and with order established the rebuilding began. During that period in time technology advanced at less than a snail’s pace eventually returning to a level equal to that of before the disaster after nearly two centuries had passed.
The reason for this lack of advancement was that the government leaders were more interested in trying to establish normality rather than concentrate on the niceties and the biggest symbols of mankind’s triumph over adversity came in the form of four megacities, three of which were built close to where the comet had made land fall.

The first of these was Atlantica, built where New York once stood. The second was Pacifica built where San Francisco had been. Later Europa was created where Paris had once been and finally New Tokyo was built on reclaimed land on the west coast of Australia. Since Australia had taken in many of the Japanese refugees it seemed natural for them to build a new city there to honour the original Tokyo lost when the country was wiped from the face of the globe.
By the time the period of rebuilding was over new political empires had formed as new alliances were made. Some of these had been formed quickly after the disaster but others came later as a means of balancing out global power. Some had hoped the catastrophe would bring about a long lasting world peace but as things returned to normal mankind soon remembered it had not lost its penchant for fighting war. 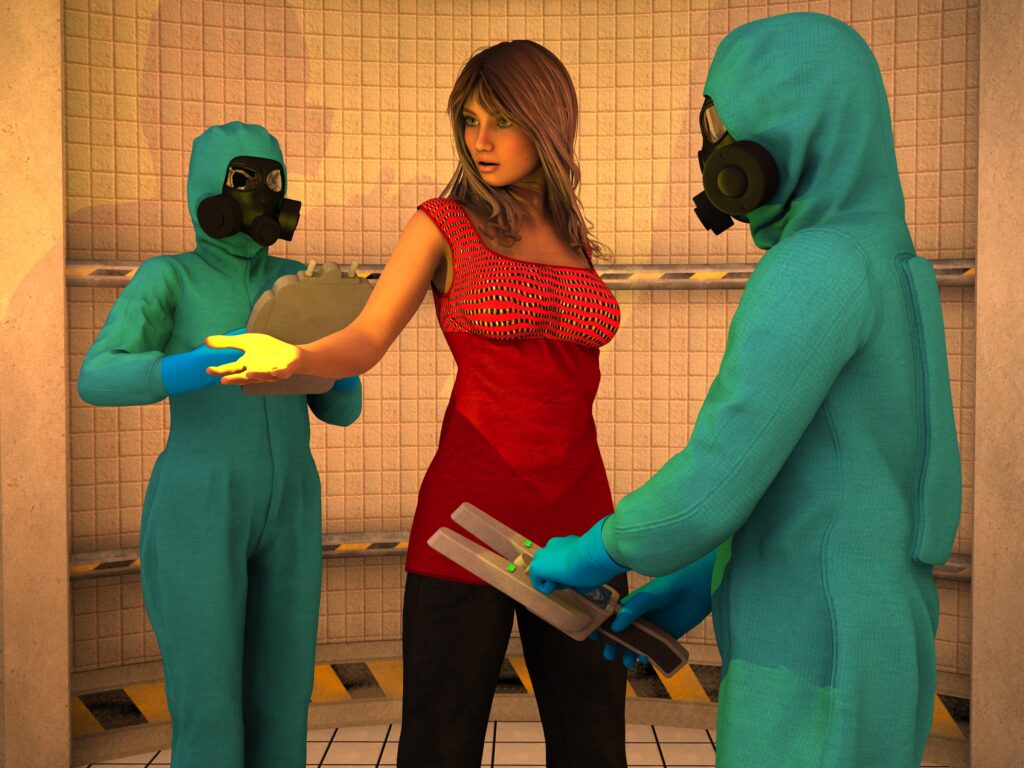 Away from the political wrangling between the new super powers, as human progress seemed to start moving forward the human race it seemed had taken a new evolutionary step with the appearance of what became “Alpha humans” or simply “Alphas,” ordinary people with extraordinary abilities.
Two types of Alphas “appeared” the “Inferiors” who lacked special skills but were immune to almost every illness and “Superiors” who had the same immunity but also super human capabilities. Scientists would learn that all Superiors originated from Inferiors who went through an internal metamorphosis but the mechanism behind the change seemed to occur at random any time in their lives and most Inferiors would never actually make the transition.
Since the Superiors generated the most attention, to a large respect the Inferiors were considered “normal” to the extent when anyone spoke of Alphas they were referring to the former and not the latter.
Scientists were at a loss to explain this rare “offshoot” of the human race for they were so rare it was hard to get any data to extrapolate but after several decades of research the Alphas were discovered to have had ancestors that had survived a mysterious plague that had killed many following the initial comet impacts. At the time such diseases were prevalent without a proper medical infrastructure so the true nature of the plague was never fully investigated.
It was only looking into the history that scientists studying Alphas began to consider that the comet might have carried some sort of extra-terrestrial biohazard that either killed those it came in contact with or had somehow mutated the DNA of the survivors. Why the effects of the mutation had appeared generations later though would be another mystery for once the revelation of Alpha Superiors became general knowledge they became targets. Feared by ordinary people for the dangers they could become Alphas often chose to hide their unique gifts. 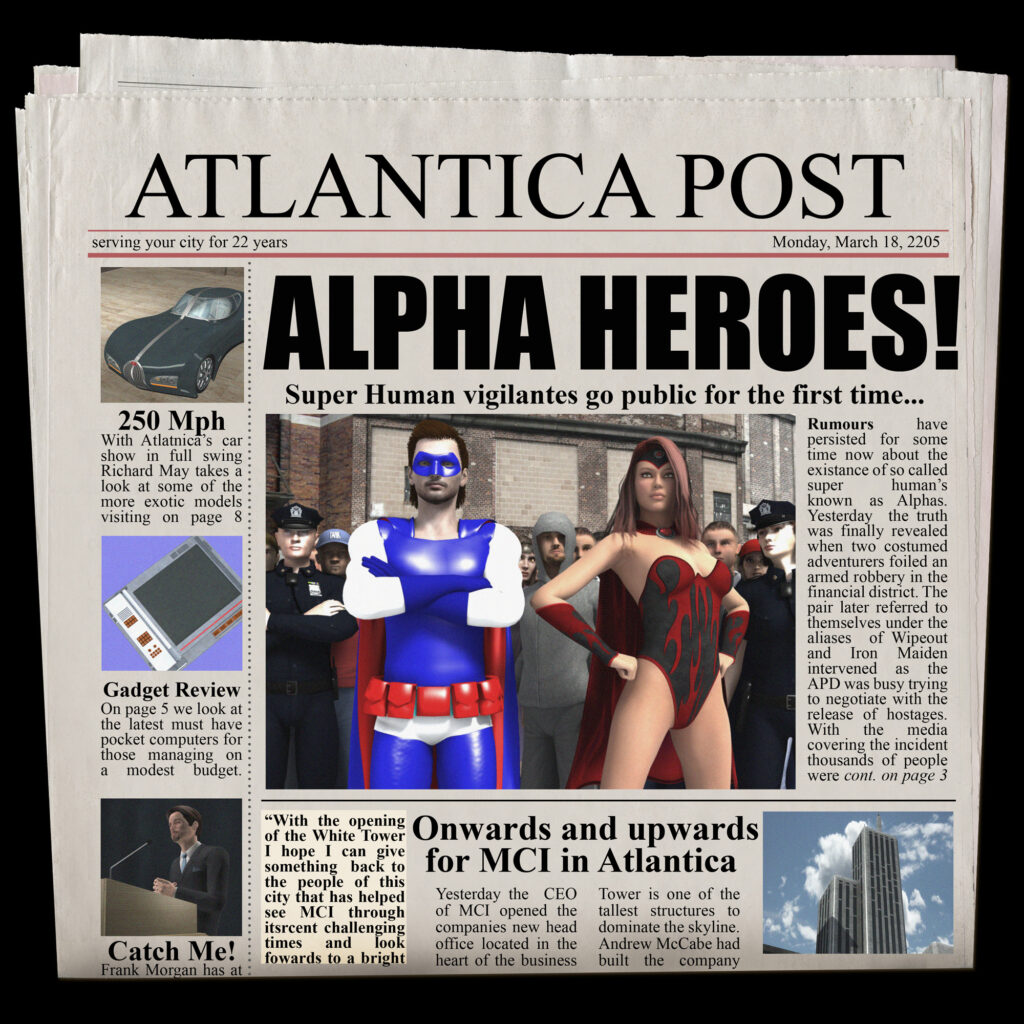 Military forces around the globe viewed these powerful humans as either valuable assets or threat to security which was another reason for Alphas to remain discreet. However despite the risks some Alphas chose to use their gifts for the benefit of others. Those that did not join official agencies chose to use their skills to fight crime as costumed adventurers. Similarly there was an equal number of Alphas that decided to use their gifts for more negative purposes, becoming criminals or working for criminals. 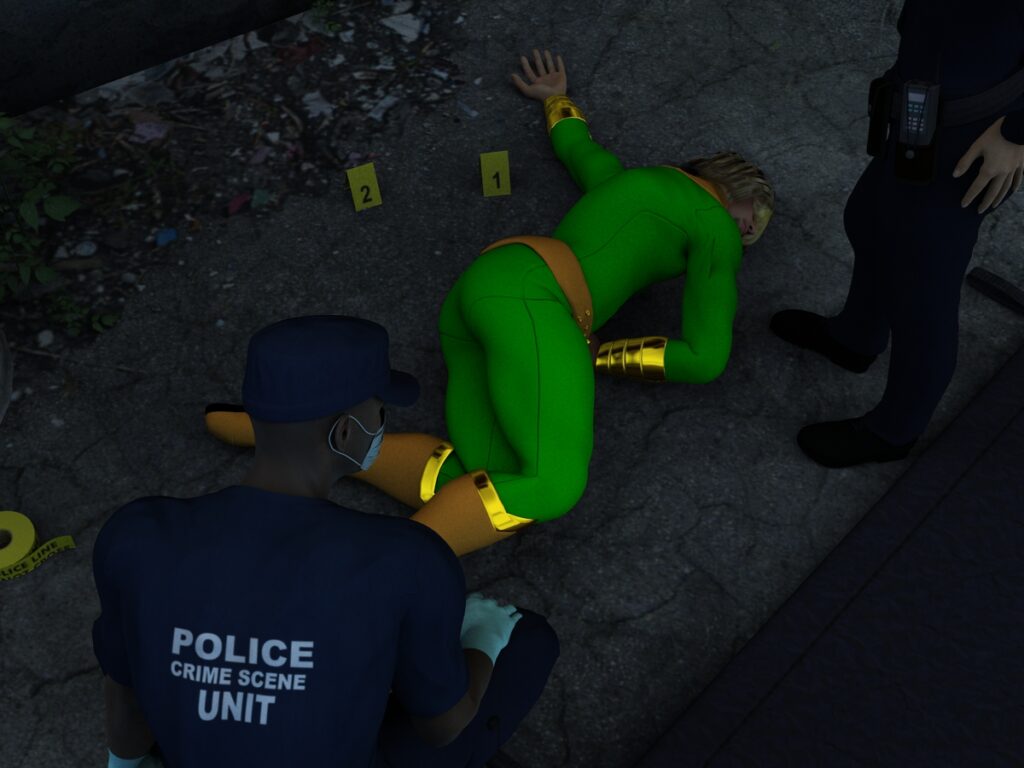 Within decades of the first Alphas ‘appearing’ they inexplicably vanished. It began with the most prominent ones, the heroes that had been in the public eye being discovered dead in mysterious circumstances. Due to the nature of their “work” foul play was suspected until Alpha Inferiors began to die off or simply disappeared from public records. Scientists at first thought that the genetic offshoot had reached its natural end until CLEA, a global crime fighting operation discovered “Black Shadow” a global crime syndicate. 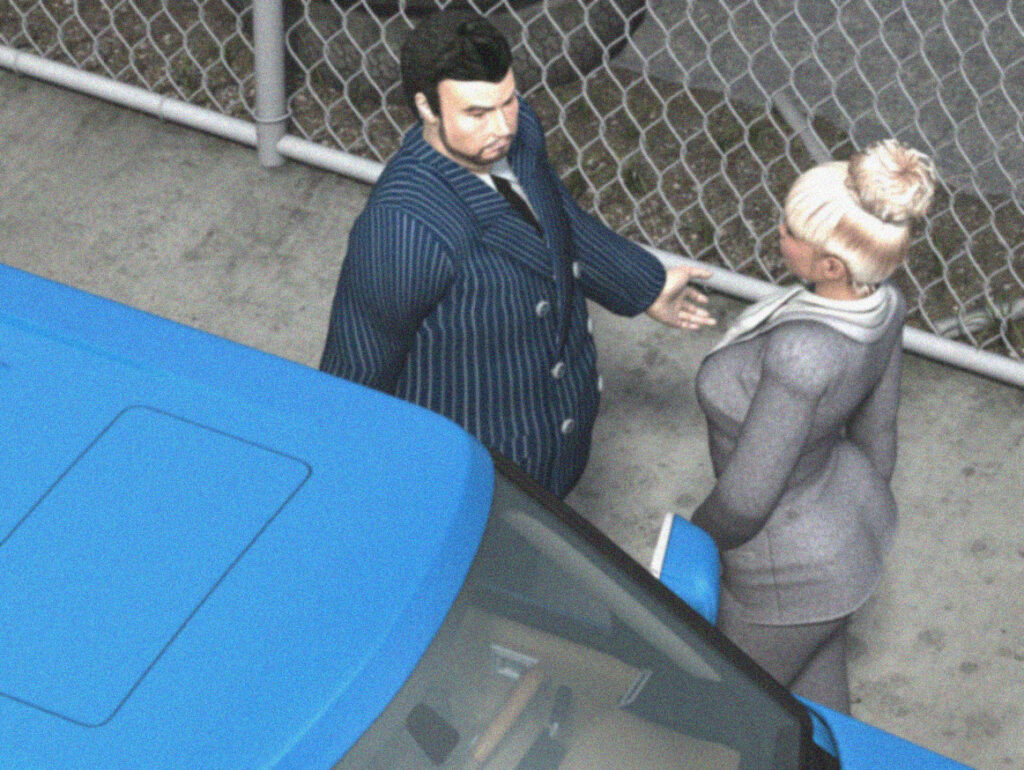 Black Shadow as an organisation considered Alphas to be a threat to their empire and so had decided to take it upon themselves to eliminate the problem by killing all Alphas they discovered, and they became very good at it.
Having infiltrated positions of power and a whole host of law enforcement agencies the syndicate leaders were in a position to act on a global scale. Using a key piece of scientific evidence that all Alphas had a distinctive “diamond shaped birth mark” they were able to scour thousands of medical records and systematically eliminate Alphas, even those that had yet to manifest any “abilities”. Since Alpha Inferiors had the potential to become a problem the syndicate decided to take radical steps to ensure that would not occur.
Word quickly spread in the Alpha community about mysterious assassins and those people aware of their ancestry got themselves as far away from society as possible but the remainder were not so lucky.
For two decades Black Shadow performed their evil work right. CLEA one of the few agencies who was “clean” was aware of the syndicate could do little to stop them, since they had not got vast resources at their disposal. Ironically it would take one man, stumbling on computer record that would bring the syndicate down after he discovered one of Black Shadow’s hit list. 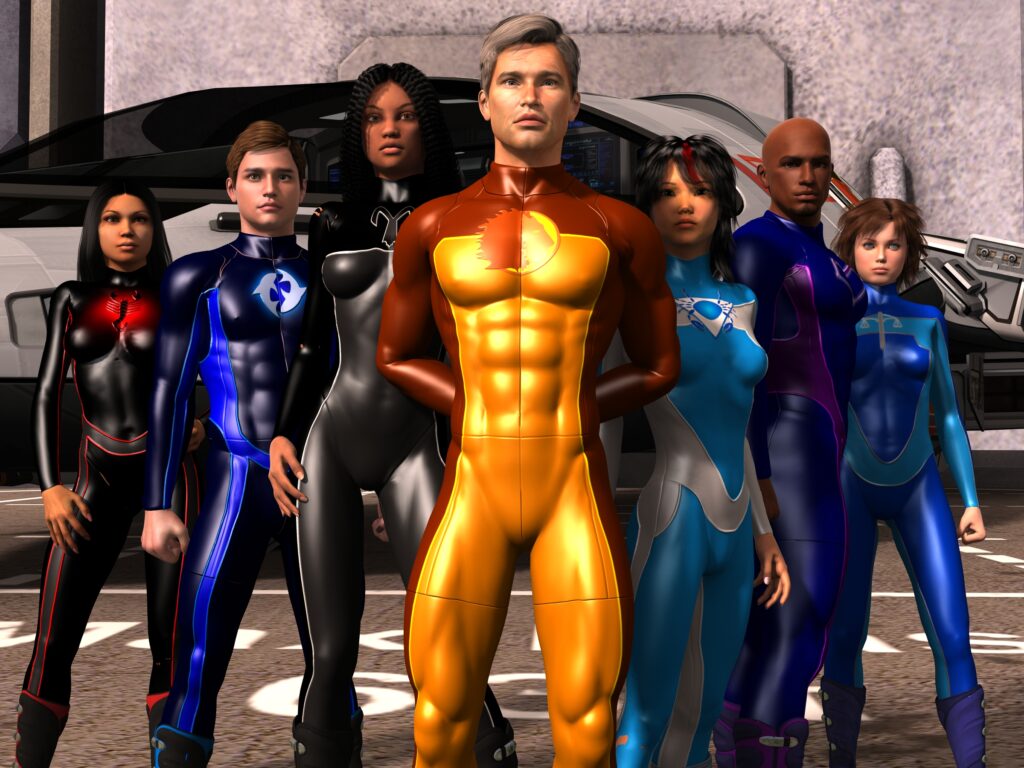 The people of the hit list, all Alpha Superiors would band themselves together initially for mutual safety but after realising they were greater than the sum of their parts they decided to fight back and become known at Team Zodiac. After exposing Black Shadow operations in Atlantica, CLEA working with other agencies around the world was able to destroy most of the syndicate and once this was done Alphas once more were able to come out of hiding.

The new age of Alphas had begun.