Blinder – One Flash of Light and She is Gone

An Alpha criminal with an unusual ability for she can generate light which not only temporarily blinds her targets but also knocks them out at the same time. 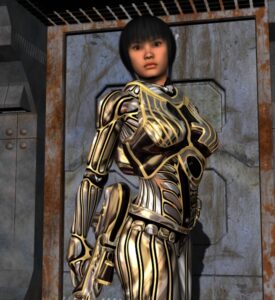 Takiko grew up in a poorer district of New Tokyo. After seeing her family suffer due to having to scrape by, believes fate has gave her the chance to reap some rewards when her Alpha abilities activated. Angry at the world for her tough childhood she believed the world owed her a debt and so took the name Blinder and become one of the best thieves in the Alpha Criminal community.
Taking on jobs for a variety of clients she is not afraid to take out anyone that gets in the way of her goal. However unlike other Alpha criminals she does set out to deliberately hurt people.
Having “obtained” an armoured suit one of the first item she stole was a prototype pair of wings. These she attaches or detaches from her suit depending on the job in hand. When not wearing the wings she tends to arm herself with a stun rifle of unknown origin. This is a last resort weapon for when all else fails. A loner by nature, Blinder has avoided alliances with other criminals as most she find in her opinion to be “completely nuts”.