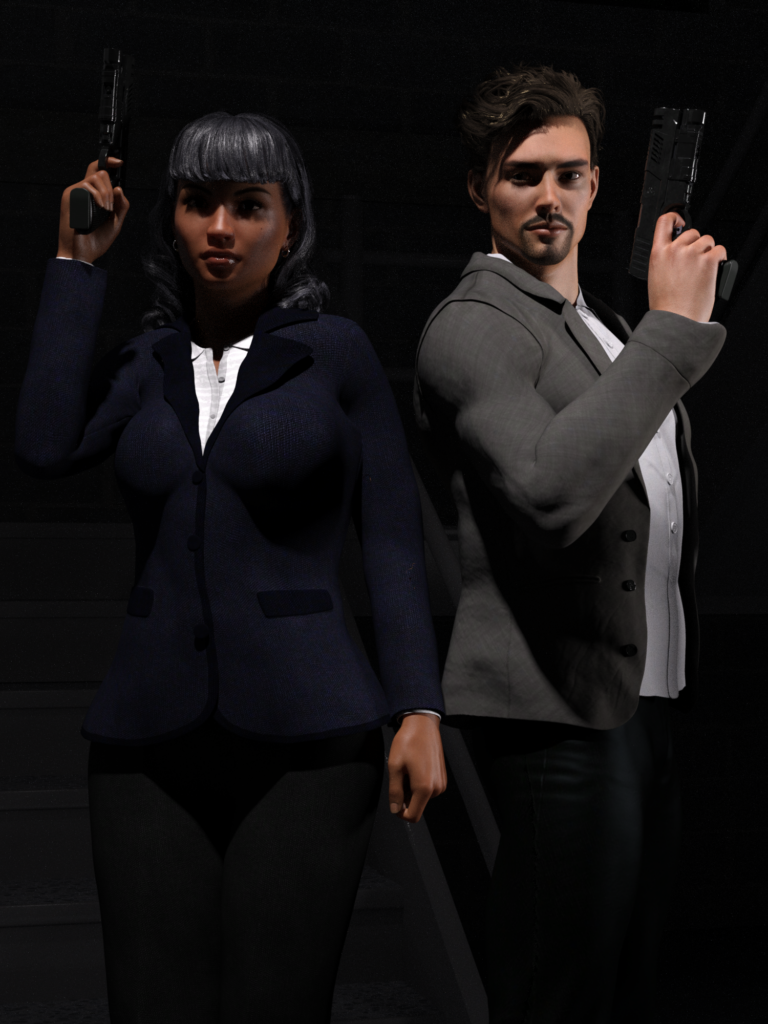 Ortega and Petersen were both originally part of the internationally security force, Task Force Z (TFZ), that controlled Terror Island.  When a science facility went dark they were assigned to fly over to see what had happened only when they got there the entire place had been trashed.

Since they were in a radio dead spot they decided to return to base only as they lifted off on the Species Beta known as Brutes caused their helicopter to crash. Unwittingly they had actually stumbled into a civil war by the Species Beta inhabitants.  No human was even aware that such a system existed as they simply regarded the varied creatures, as creatures and never considered any social order.

Though the helicopter was downed they were not caught by the brutes as they were rescued by a small species Beta resistance force, that would later become known as Gaia. (see Gaia for full story.) In order to facilitate communication in the group the pair become telepathically linked to the entire group and each other thanks to Baryolax “Barry” Xigon.

From the group the pair learned that the Brutes needed to depose the “Forest Queen” to win the help and had help from the Venator. Corey and Sophia though know that the Venator could not get on the island without assistance from someone high up within the TF Z officers. They then realised that they had been attacked, since if they got back to base and reported what they had seen they would expose everything.

With the brutes all but controlling two thirds of the island the group decide to rescue the Forest Queen and then escape the island.  Making it to a TF Z base on foot would be impossible so that was the only logical choice. Against all odd the entire group managed to rescue the Queen and her guardian and then to get off the island they re-floated a small boat that Sofia had seen from the air during her patrols.

Being TF Z officers meant that Sofia and Corey were aware of the naval patrols and their schedules and that allowed them to get clear of the Terror Island waters. From their they headed to Australian and travelled inland up a river until they found a secluded spot. All the species Beta were dropped off and Sophia and Corey then sailed back to the coast.

Following this they arrived at a CLEA facility and decided to turn themselves over, in order to report the Venator being on the island and corruption in the TF Z. They however did not mention they had been helped by other Species Beta. Though CLEA had no direct control over anything that happened on the island being an international agency dealing with crime, TF Z commanders could not ignore the report and in due course rooted out the corruption.

Following the legal cases, Sofia and Corey felt they could not return to military service and instead chose to join CLEA.  Must to their frustration, Barry’s gift was supposed to wear off over time but hadn’t and they were stuck with hearing each other’s thoughts.Had they not asked to become partners in the agency this would have been a huge problem.

Despite never mentioning the other group, their secret in regards to them was learned so when some Species Beta, illegally brought to the mainland escaped they were personally asked by  Chief Joshua Hunter to recruit their “special” friends to help.  They did this and the others at first felt their trust had been broken but provided help as they felt the owed the two CLEA agents.

Following the assignment Joshua Hunter now started assigning the pair to some specialised investigations. They wondered why they were getting singled out for particular work. That was when the CLEA chief hit them with another bombshell. He knew about their telepathic link and felt that such an advantage could be very useful to deal with certain dangerous criminals. However he agreed that he would never make their unique ability public knowledge and keep it high level.

As an investigative pair, being able to read each others minds enables them to rapidly change tactics in the heat of the moment which often leads to success in arresting some tricky criminals, who are left wondering how they were outsmarted.