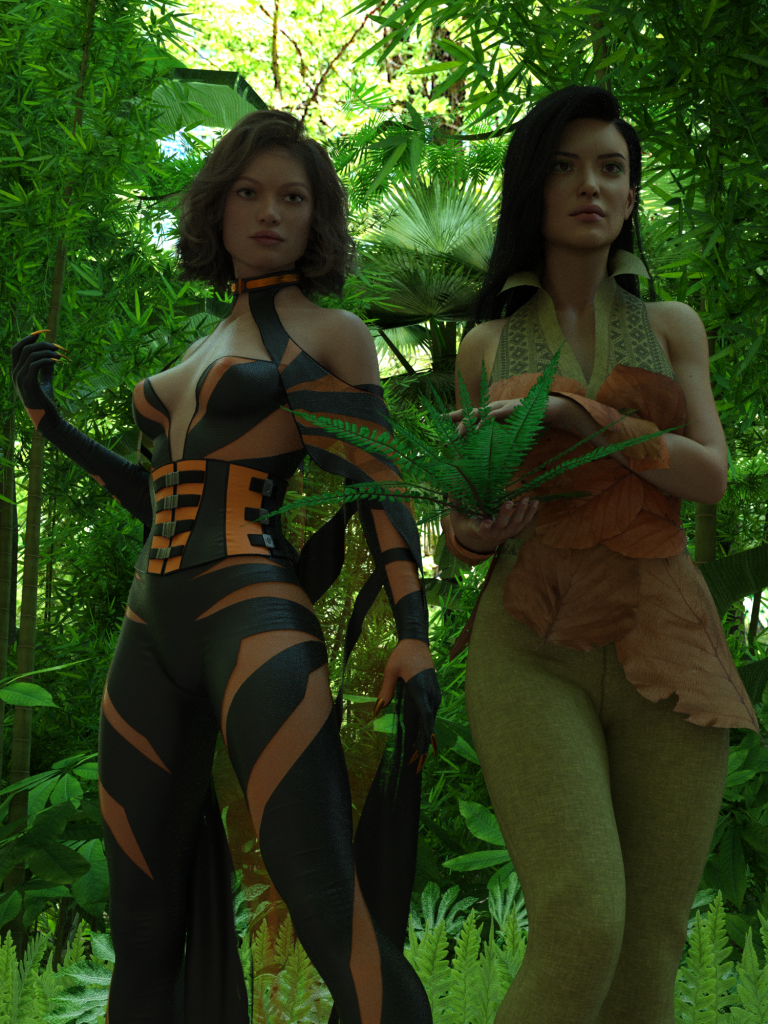 Alexis Russell and Caitlin Harris were two well renowned scientists in the fields of animal biology and botany respectively. Alexis was originally only interested in expanding her knowledge of science, believing rare animals might harbour secrets to some incurable human diseases. However a chance encounter with Caitlin at a world science conference would see Alexis discover a new passion.

Caitlin had spent her student years studying the ecology of rare plant life in the Amazon on a research project. She had seen first-hand what happened when money and industry got in the way of nature and the resulting devastation. As a student though her voice carried little weight but once she reached the top of her field Caitlin could not be silence so easily. Consequently she had travelled around many conferences and summit to try and voice her environmental concerns in the hopes that world leaders might take note. She tried to get others to support her goals, the thoughts being that the bigger the voice the bigger the chance of getting noticed.

During a science conference in Europa, Caitlin was one of the speakers but her planned speech was ruined by a Greenhand attack in Alaska. The actions of the self-proclaimed eco-terrorists, had the effect of casting all those pushing environmental issues in a bad light. Consequently very few scientists bothered to attend Caitlin’s talk.

Dejected she went to the cafeteria afterwards to drown her disappointment in a large coffee and was spotted by Alexis. She noticed that Caitlin looked alone and since she did not have any company she went over. As with most conferences meeting other scientists was a way of expanding her professional circle of contacts, but when Caitlin explained her environmental work then Alexis considered she had made a mistake. Being polite when Caitlin asked Alexis what field of science she was working in, Alexis explained her research into incurable human diseases via the study of rare animals. After stating that Alexis expected Caitlin to lecture her on ruining nature. Caitlin though merely stated she had not problems with people studying nature as a means to move the human race forwards but what she did object to was destroying nature so people could simply make rich people richer. She then asked Alexis to consider how many times a rare animal might have been lost that could have helped her in her research, adding that when rare ecosystems were lost then people could be affected in ways that were never expected.

That single question hung over Alexis long after the conference had finished. As she continued her work, Alexis could not get the idea out of her head. Caitlin was right, the more the land was raped the chances of finding cures for many diseases could well be lost. Seeking out Caitlin, Alexis asked to be part of her eco movement believing that two well-known scientists spreading the same message might get people to listen.

The Governments around the world though were not interested and the more the pair tried to lobby and gain support, the more the governments found other scientists that could disprove the pair’s theories. They had taken on the system and lost. Caitlin and Alexis were then blackballed by the scientific community meaning most of the work dried up. Angry at what had happened to them the pair grew more determined than ever to get people to take them seriously. That was when the pair reached a conclusion that Greenhand might have had the right idea in that a show of force might be the only way forwards.

One night after getting drunk, Caitlin confided in Alexis that she was an Alpha Inferior. Not in control of her thoughts she stated that perhaps if she had some “super human” abilities then she could get people to listen. The idea was only a half crazed thought brought on by too much alcohol but Alexis heard every word and considered that there was merit in the idea. It was only then that Alexis revealed that just like her friend she was also an Alpha Inferior and they took it as sign that some power on high wanted them to work together as there had to be some grand plan why fate had brought them together. The odds against two Alpha Inferiors meeting at random could not be rationally explained.

Flying over to Australia, Alexis hired a laboratory and gathered some rogue scientists that were skilled in genetics and believed in their cause. Together they began to try and activate Caitlin’s Alpha abilities. Some of the scientists had one time links to the ARGO group so knew it was possible to artificially activate an Alpha Superiors abilities. Since Caitlin had made the original suggestion all the experiments were aimed at her.
No matter how hard they worked the scientists had the same problems as ARGO had experienced. Jump starting an Alpha Inferior to Alpha Superior status was not that easy. Weeks passed, then months and then came an experiment which bore fruit. By this time the pair were low on funds so had to take on other work to pay for the other scientists involved in their “project.” The problem for Caitlin was she had no idea that her status change had been triggered and like any other Alpha that was artificially turned Alpha Superior there was some instability involved with her gifts.
Unware of the success of the latest statement since the test results had returned negative, Caitlin had returned to her passion of plant studies and so had been flitting from the lab to a remote research site belonging to a friend who still recognised her scientific research in the field of botany.
Working with the plants meant trace elements of them were present on her skin when her Alpha abilities activated. Due to the instability her gifts were “mutated” giving her the means to control plants. As soon as she realised what she could do she immediately abandoned her research and flew back to the lab in Australia and recalled Alexis.

The experiment that triggered Caitlin’s abilities though did not work on Alexis so it was another year before they were able to trigger her abilities. Just like Caitlin, Alexis had been forced to take on jobs to fund the project only in her case she had chosen to study animals at the lab in Australia rather than perform field research.
Having seen what had happened to her friend, Alexis carried trace elements of Animal DNA with her permanently when working, figuring that if and when her abilities were triggered, she would gain the means to “control” animals. However when her gifts were activated the instability caused from the unnatural triggering did not no go as she had planned and instead of controlling animals, Alexis gained the means to partly alter the DNA of other people with animal strains on a temporary basis.

With their project finally complete the pair were ready to give nature a voice but before it could be implemented Caitlin and Alexis knew they could leave no loose ends. Having had their abilities artificially initiated they considered that what had been done to them could be reversed and therefore all the data regarding their transformation had to be erased for the greater good. They therefore destroyed the lab killing the scientists that had helped them. To the pair they considered the deaths of those people a necessity and likened them to martyrs to the cause of saving nature.

In several highly public appearances they began their Eco warfare campaign choosing to target businesses and those in power that opposed their plans for the human races harmonious co-existence with nature.

Being extremely intelligent and having total belief in their cause meant that law enforcement agencies quickly took note of the pair and made them a high priority. After an incident where Beastial infiltrated a world trade summit and temporarily changed several delegates into humanoid pigs, CLEA decided to start pursuing the pair aggressively.

CLEA agents quickly learned that that Beastial is often the “leader” of the pair and most likely to react to a threat whereas Vine is a lot more reserved by comparison. Interestingly the pair have made one major enemy in the form of ARGO who not only do not appreciate the loss of valuable research scientists but are also interested in how the pair mutated their Alpha abilities. Having studied the Alpha effect for years the three ARGO heads know that the chances of two eco warriors having “nature” related abilities is a coincidence too far.

Another pair of “enemy” groups they also picked up was the Beast Warriors via Beastial’s own actions, and Chimera. In the case of the latter, Beastial was merely a pawn after “Trojan” temporary reprogrammed her to go after Marvin Buchanan’s daughter.