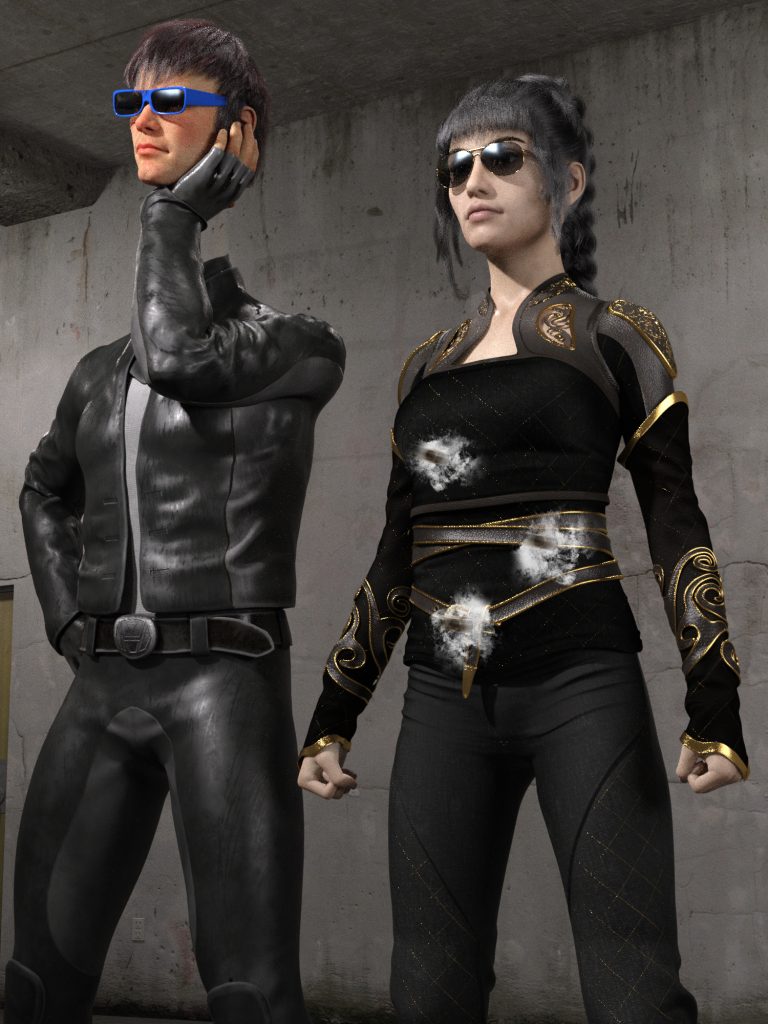 For a pair of heroes well known enough for CLEA to give them a codename, the surprising thing about this pairing is down to the fact that neither one actually wanted to become a hero. As individuals they lacked confidence and did not believe they were good enough to be like team Zodiac and all the others and so kept their Alpha Superior status a secret from everyone until situations would conspire against them and prove they were much more capable than they imagined.

Like several other Alphas Tracey was aware she was an Alpha Inferior from an early age. The signs were there from the beginning. She never got ill and she had the distinct birth mark. When she experienced the blinding headaches and light sensitivity, a doctor confirmed she was changing to an Alpha Superior. He suggested that when her gifts were triggered she might want to consider working for an agency such as CLEA but as her doctor he was obligated not to reveal her secret.

Tracey’s gifts got triggered when she was commuting to work and nearly got hit as she crossed one of Europa’s many busy roads. The sudden adrenalin surge was enough to cause her “status” to change. Like every other Alpha Superior, she knew her status had changed by the headaches and light sensitivity instantly vanishing, but like many Alphas, knowing her status had changed did not mean she knew what her gifts were.
That took considerably longer, and she only discovered her gift when somebody threw a stapler across the office. The act was not deliberate, more of a prank that had gone wrong and was not supposed to hit her, but when it did her skin became hard and deflected the object. Rather than let anyone know she was “special” she laughed the incident off and refused to let anyone see the bruising (which was no existent). Further experimentation at home revealed that the faster an object hit her, the tougher her skin became at the point of impact.

Thinking there might not be an awful lot of use for such a gift, Tracey decided she would not be any use as a hero and so elected to carry on as normal. This changed when she was enjoying a night out and a crazed angry drunk suddenly pulled out a gun and started shoot wildly in the middle of a dance floor. Though she did not consider herself a hero she felt the urge to shepherd her friends away from the danger and received two hits. The bullets bounced off. Her friends where amazed and the secret was out. Realising she was in no danger Tracey knew she could help the others in the club and approached the drunk who proceeded to empty the rest of his clip, to no effect, at which point she punched the surprised man in the face. He was that drunk he fell over and club security was able to take care of him.

She was hailed a hero by the crowd and “Bulletproof” was born.

Dyson had a similar background to Tracey in that he was aware that he was an Alpha Inferior from a young age. In his case when his Alpha abilities activated he became acutely aware of what his gift was because he stood up from his desk at work and left his hands behind. Several office staff fainted and he only became aware of the reason when he looked down. In the commotion that followed as he stated at them they snapped back into place. A practical joker by nature, Dyson was able to bluff his strange gift off as a sick joke but his boss was not amused. Rather than admit he was an Alpha Superior, Dyson offered no defence for his “inadvertent” actions and was fired.

During the time he spent finding another job, Dyson learned how to control his strange gift but once he found alternative employment he decided to keep his ability a secret.  He thought that if people knew what he was then he would never get to have an ordinary life.

The twist of fate that saw Dyson turn into a hero occurred during a visit to the bank. Whilst at the counter two masked men brandishing guns burst in through the door and demanded everyone to sit on the floor. Realising that one of the men appeared to be shaking, as if displaying symptoms of drug withdrawal, Dyson thought that the situation might get a lot worse. Despite assurances from the men that no harm would come to the hostage if everyone complied, Dyson chose to act.

Detaching his hand he let it “wander” up onto the counter. Like a strange pink spider, his hand reached the edge of the counter and was able to climb up the robbers clothing and sat on his shoulder. Already high on drugs when the robber was a large pink spider out of the corner of his high he screamed in shock and started gyrating around trying to rid himself of the large intruder.

His partner, who was behind the counter came over to investigate. Obviously the story of a mysterious hand spider was not believable to the man’s partner so whilst they argued, Dyson kicked his left leg out, Hs foot flew off and struck one of the robbers in the stomach with such force that he keeled over having been winded. Realising something was amiss the other robber turned to face Dyson. He panicked and “recalled” his hand and foot. The former his the man in the back of the head on the return journey spinning him around at which point the returning foot caught him in the groin. Both men were now down so the hostages quickly disarmed and restrained them. When police arrived Dyson, heard the witnesses mentioning a dismembered hand and that was where he got his idea for a codename. Unlike Tracey who became instantly known, Dyson still had some anonymity because nobody had seen him remove his limbs in the chaos of the robbery.

The pair would eventually meet when “Bulletproof” started gaining some successes as an Independent hero”.  In taking on bigger and more challenging “problems” Tracey had begun to become over reliant on her gifts to get her out of situations and was rapidly discovering that “super villains” were finding it easy to exploit her weaknesses.

In one situation Tracy found herself chasing down the Alpha Criminal known as Heavy Metal (now a reformed vigilante) someone whom had become her nemesis over the years. Unaware that Heavy Metal had partnered herself with “Flash Flood” (also now a reformed vigilante), Tracey suddenly found herself taking on two Alpha criminals at the same time. This was a serious problem, for Flash Flood could use his gifts to drown her and so she had to retreat. Normally in those incidents the Alpha criminals would make their getaway but Heavy Metal saw opportunity to rid herself of an enemy so both criminals gave chase.
Whether it was luck or fate Tracey rounded a corner and slammed straight into Dyson. Though he’d decided to only use his gifts to fight crime if he happened across them, he certainly had not decided on looking for trouble, especially Alpha related. However when Tracey ran into him whilst being chased by two strangely dressed people with “unusual” abilities he decided to act. At the time he thought Tracey was just an innocent member of the general public whom a pair of Alpha Criminals were chasing for “fun”.

Without stopping to think about the consequences, Dyson ordered Flash Flood and Heavy Metal to stand down, threatening them with attack, to which the pair laughed. They did not recognise him as part of the “Hero community” and assumed Dyson to be a have-a-g-hero member of the general public. They therefore ignored his warning and charged straight towards Tracey and him.

Their unexpected response caused Dyson to panic, since he’d never taken on super villains before. In his excitement he launched a foot at Flash Flood but missed and “kicked”  Heavy Metal in the face. That succeeded in annoying her and as he definitely realised he had bitten off more than he could chew Dyson decided to retreat only he had to wait for his foot to “return”. He’d tried to recall it but a deflection had left is stuck behind a pipe and that in turn had led to him hopping on the other leg. This change in fortune allowed the Alpha criminals to close on him.

Having caught her breathe, Tracey wondered why she was no longer being chased and turned to find  Dyson facing down her two enemies. He appeared to be totally out of his depth but despite her total lack of energy to fight she felt compelled to save her would be saviour. Jumping between Dyson and the two Alpha Criminals, Tracey engaged the pair and got in a few blows. Dyson by now had regained some of his lost confidence and regrouped by detaching a hand and letting it loose to try and free his wayward foot. Once the foot was free he was able to recall both limbs and re-joined the “battle”. The ensuing scrap did not last long because as soon as police sirens were heard Heavy Metal and Flash Flood bugged out.

Afterwards the pair went their separate ways although Dyson expressed a desire to become a fully fledge “hero” after surviving the incident. Tracey suggested another hobby but Dyson would not be dissuaded and started on the long road of learning to better master his abilities. During this time he helped (usually with a major dosage of luck) a few other lone Heroes during chance encounters until the time fate intervened again and his path crossed with Tracey’s. This time he as able to save her without needing to be saved himself and he got to quip that she perhaps needed a better hobby as she seemed to getting into situations that were beyond her control. There then followed an exchange of banter until both of them concluded that they were both perhaps a liability when working alone and that maybe they stood a better chance of success if they teamed up.

At first they kept separate lives, contacting each other only when they felt they needed back up from the other one but that soon seemed stupid as they started to develop a friendship and were seeing each other anyway. The decision was therefore made that as they worked in the same district of Europa then they should perhaps get an apartment with each other.

Knowing each other intimately has enabled them to know what the other is thinking and thus even when situations spiral out of control they can reverse their fortunes and turn the tables on their enemies. Rather than go after the big game, they prefer to fight crime at a local level, dealing with muggers, thieves and thugs. Though not exactly the most successful pairing of heroes, they are certainly one of the most unorthodox and their crime fighting actions have got them noticed by CLEA, not that the agency is in any rush to use them as a special asset any time soon.