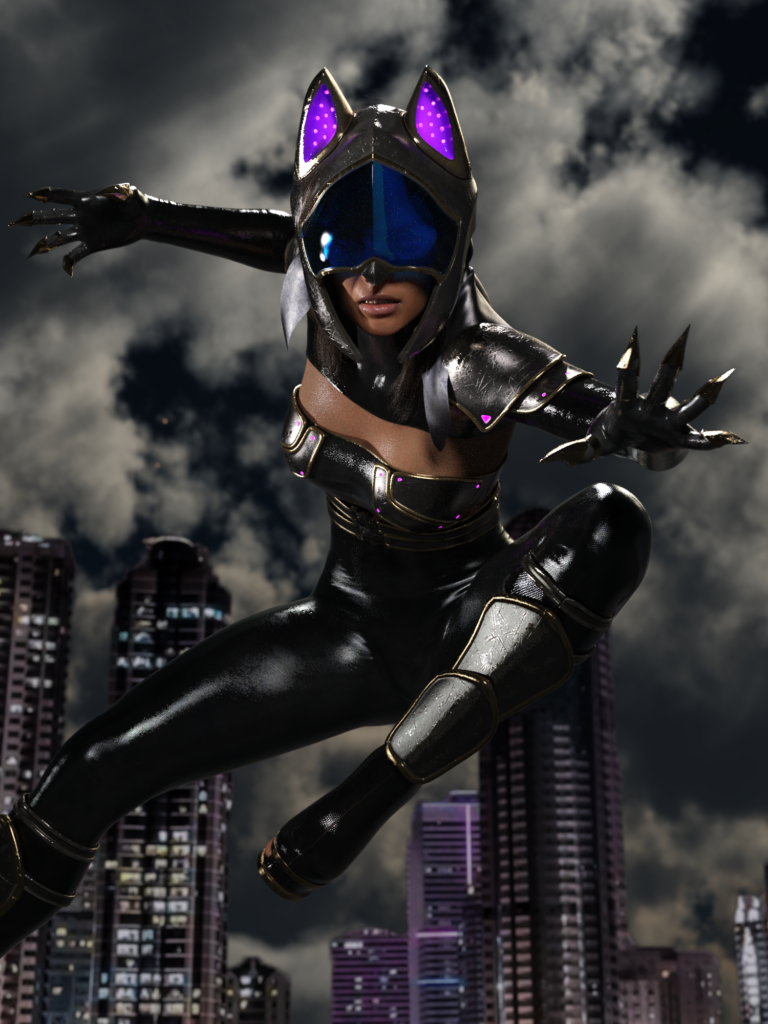 Copy Kat is the creation of Zorn. Following his defeat at the hands of Impact and Prowler, the Alpha Criminal  James Carlisle aka Hard Copy wanted revenge on the pair, so much so that he went looking for the Broker whom he knew could “make” Alpha Superiors.

This took some time and just as James had heard from rumours on the street, the “price” the Broker wanted was not always of a monetary value. Luckily for him, the Broker only requested a biological specimen from James to add to his “employer’s” growing collection of Alpha Superior material samples. The Broker also wanted James to supply the “test subject” to be converted. It was explained to James that it did not matter if the person was willing or not, so long as they had the right attributes i.e. strong and fit, in order to survive the procedure. According to the Broker the memories of the test subject could be altered to make them more compliant later.

The first part of the deal was easy for James but the second part proved trickier. In the end after a good deal of searching he happened upon Tamara Newton, a female security guard that seemed to tick all the right boxes. Since her nightly patrols at the industrial facility she was employed meant she was both outside and alone, it was relatively easy fro him to snatch her.

As good as his word, within three weeks the Broker returned with Tamara. As well as having the means to mimic the attributes and senses of any animal she came in contact with in the hours of darkness, she was also been “programmed” to be loyal to him. This was perfect for Carlisle and after a few weeks working together to get her used to her abilities he was ready to have his revenge on Impact and Prowler.

Sufficed to say the clash was everything he had hoped for and the pair managed to score a victory over the heroes but they escaped. A few weeks later they caught up to Impact and Prowler again and this time Tamara gave Prowler a severe beating. She only stopped when police started to head into the area after the fight had been called in.

Whilst Carlisle had enjoyed the beat down handed to the pair, the fight had actually triggered locked away memories in Tamara. The Broker had warned Carlisle not to push Tamara mentally as her old memories could resurface, only he was so keen on having his revenge he had ignored the warning.

By the time the pair clashed with Impact and Prowler a third time, it was enough to completely shatter the altered memories and Tamara started to remember who she really was. In the confusion she chose to leave the battle and left Hard Copy alone with the pair and the tables were quickly turned against James. He was then caught and handed over to CLEA but she remained at large.

Without his influence Tamara’s real personality started to override the fake one created by Zorn. As she started to remember the life before she had been kidnapped which had been blanked out she also started to recall some of what happened to her whilst in possession of the Broker. She also started to feel remorse over having attacked the pair of heroes. She also wanted revenge.

Out of guilt she tracked them down and though they prepared to take her down the same way they had dealt with Carlisle, before the fight even started, she ripped off her hood and begged them for mercy. As she explained all she knew she was surprised the pair actually stopped to listen and was even more surprised they believed her. Though she offered to turn herself in, Impact and Prowler told her not to. In their opinion she was a victim and suggested if she wanted to do something right then a better idea would be to use Zorn’s gift to do the opposite of what was intended. Instead of becoming a criminal they suggested she become a hero, like them. And that its precisely what she did.

As a vigilante she was “given” the name Copy Kat by the media. Though she had the means to mimic other animal skills she preferred the agilitiy and dexterity of a cat and as she dressed like one the name stuck. Though she will go after any criminal, she has a particular drive to going after Zorn and the Broker. When Carlisle escaped CLEA custody she also added him to the list of people she wanted to get even with.