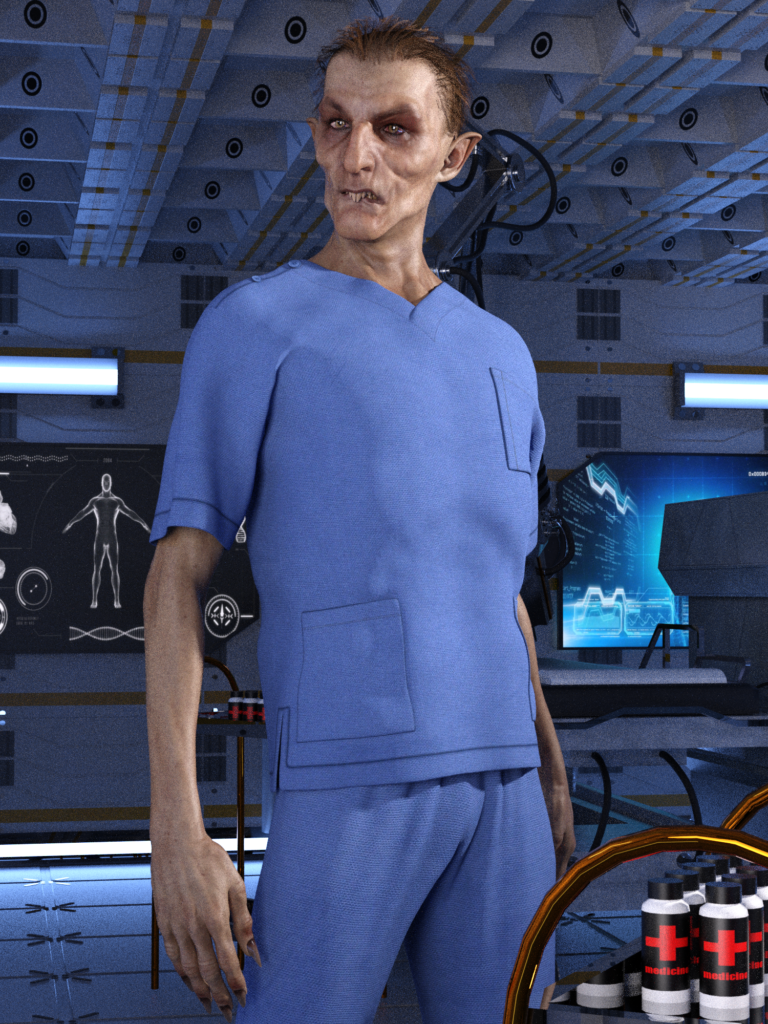 Devon is one of those examples of someone at the top of their game who had a spectacular fall from grace. As an academic he was well renowned in the fields of human and xenobiology. This he had earned through numerous degrees and led to a professorship.

At one point there were numerous pharmaceutical companies lining up to have him lead the research teams. Then everything came crashing down. One night he witnessed a vampire attack and became obsessed. He was fascinated at how their biology worked, believing many cures could be garnered from them, not unlike those that tried to find similar secrets from Alphas.

To conduct research on them, Devon first of all had the hard task of identifying a vampire and having it captured. The people he hired knew not to ask questions. Though he knew what he was doing was breaking the law, Devon had to have answers and so he had a male vampire “delivered” to a private premises he had set up. Though his test subject was largely uncooperative, Devon’s tests provided some unusual discoveries. The problem for Devon was when he published a paper and detailed his research, the mere mention of vampires made him a laughing stock.

Over night the job offers stopped and nobody wanted to be associated with him. With no work and savings drying up, things were getting desperate. Then Citadel approached and offered him the chance to go on the journey of a lifetime. They had read his paper and though they could not guarantee the means for him to research vampires they promised he would have a whole host of “fascinating” creatures to study. Intrigued and with little other choices on the cards he accepted their offer.

As one of the top researches for Citadel, Devon is believed to have become involved in many experiments, involving aliens, species beta and human hybrids. As well as studying different lifeforms it is believed he has been involved in genetic modification and implanting biological samples/genes in human test subjects. Whereas before the law generally restricted what he could do and even after capturing a vampire he was aware that what he was doing was wrong, since working with Citadel, Devon seems to have completely abandoned any normal morale values in the pursuit of science and results.

Eventually Devon would get access to another Vampire after Citadel acquired an example. Aware that Citadel was trying to capture on of their kind to study, high ranking individuals which included the leaders of the Forstner Coven made an arrangement. They were interested if they could be modified to no longer be dependant on blood, so they agreed to supply test subjects that they considered outcasts to their Coven. In return the Coven wanted to know of any progress and stipulated that they kept their arrangement a secret. Since their own would turn against them if they found out they were using vampires as test subjects it meant that Citadel had to agree they would terminate test subjects once the experiments were done and prevent escape at all costs.

Citadel agreed and the first vampire to fall foul of the arrangement was Bethany, (who would later become part of Pentacle). Aware of his fascination for vampires, Devon was given access to her. After trying out a barrage of tests he had still not got all the data he required so in the name of science he decided to turn himself into a test subject and injected her blood into his body, transforming himself into a half-human/half vampire. Bethany would later escape and when the Forstner Coven heard of this they cancelled their arrangement. That however did not matter since Citadel had a vampire of their own.

Like most “employees” of Citadel, Devon uses a pseudonym as a means to keep his real identity secret when working with test subjects. He originally went by the name Doc Red but changed it to Doc Blood following his transformation.