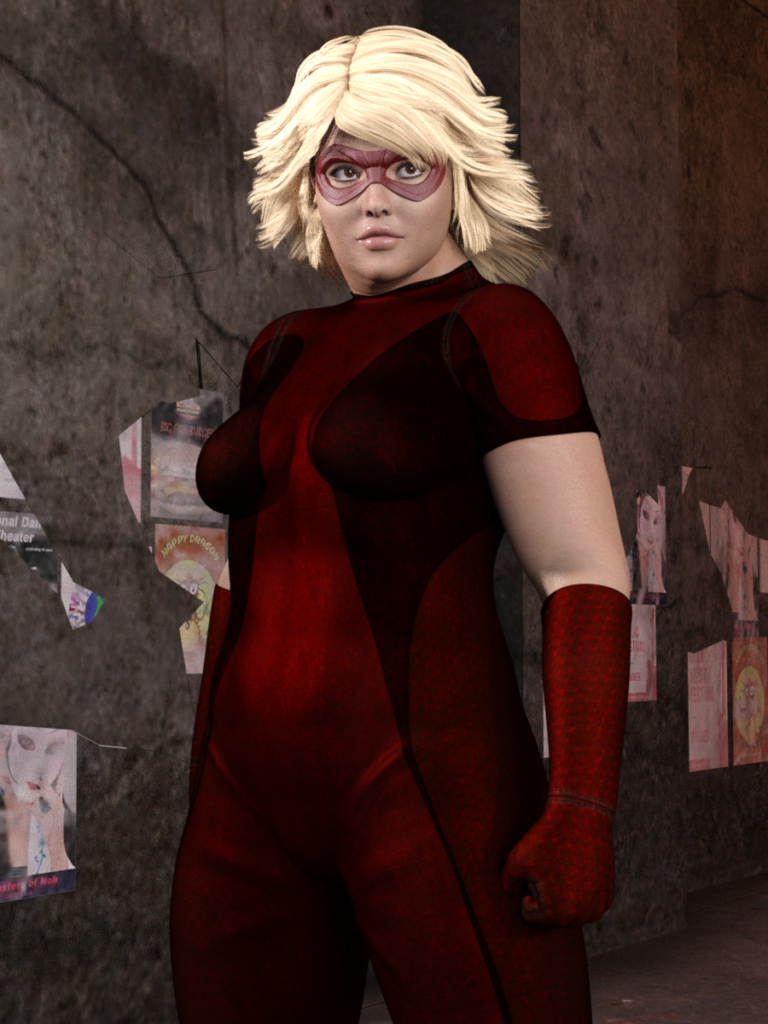 Always having learned as a child that she was an Alpha, Angela had a childhood dream of becoming a superhero. However by the time her Alpha abilities activated she chose not to act on that dream because she was too “large”. Her weigh had given her enough ridicule when growing up and since there were no “fat” heroes in the media she believed that was the “way things were.”

Then she saw the hero “Shatter” on the news on day and her whole perception changed, along with the opinions of other people for he was not a slender person. He was huge and he had helped the Phoenix Alliance deal with a major problem. Seeing him getting the adulation was enough to make her revisit her dream. Not feeling confident enough to go it alone, Angela applied to CLEA for the White Guardian programs.

Her interview went well but during her medical she overheard a medic make a nasty joke about her weight and her confidence was completely wrecked and she fled the building. It took her six months to even recover from that and by then she accepted she was not hero material until a chance encounter with a mugger in an ally made her rethink. In stopping him and giving the handbag back to a less than deserving victim, Angela got an idea that being a vigilante that operated in the shadows could work for her.

Starting off small, she began nightly patrols. Though she would have liked to be “famous” like other heroes she considered that the world would not accept her. She therefore likened her work to that of the emergency services who did their selfless jobs with no recognition from the public. In time she thought that publicity was perhaps not a good thing anyway since she could still enjoy her life without interference.

Staying out of the limelight though would not last for long for one day on the way to work she came across a an emergency. People were trapped in a building that was on the verge of collapsing. Though she did not want to be “seen” she found herself unable to ignore what was happening and send up helping the fire brigade, by travelling up to the upper floors and literally holding the top floors up whilst they got to the casualties.

They just got clear when the building collapsed. Nobody saw the “mystery hero” get out and it was assumed Angela had died. However she survived the collapse but in the confusion she realised somebody was watching the entire disaster. This turned out to be Blast Zone who had been paid to cause the disaster and was not happy. Suspecting trouble, Angela managed to slip away in the confusion but later that night Blast Zone tracked her down and tried to kill her.

Angela then went on the run and ended up hiding out in a disused factory as Blast Zone and her allies tried to find her. In the meantime CLEA had worked out who the “mystery hero” was and discovered she was still alive along with the fact that someone was trying to kill her. The vigilante community also mobilised so it became a race between who was going to find Angela first.

Blast Zone succeeded but before she could kill Angela, Rebound arrived and got her away but Blast Zone managed to track the pair down. This time however the Phoenix Alliance intervened. They could not however apprehend Blast Zone since she threatened that she had booby trapped civilian buildings and they had to let her go or else she would let buildings detonate.

Rebound was okay after the excitement but Angela was greatly fatigued so the Alliance took her with them back to their mansion to allow her to recover from her ordeal. When she awoke in unfamiliar surroundings that was something of a surprise but an even bigger surprise was the fact the other members of the Phoenix Alliance treated her like one of them. The people she considered heroes also considered her one and they did not seem to care whether she was big or small.

It was the Alliance that gave her the confidence and self belief she had been lacking. In time they helped to achieved her full potential as an costumed adventurer and she became one of their reserve members. The group also supplied her with her current outfit. She however chose the codename of Fax, a reference to the old technology machines that could duplicate and image before sending it. As she could duplicate a material it seemed appropriate.