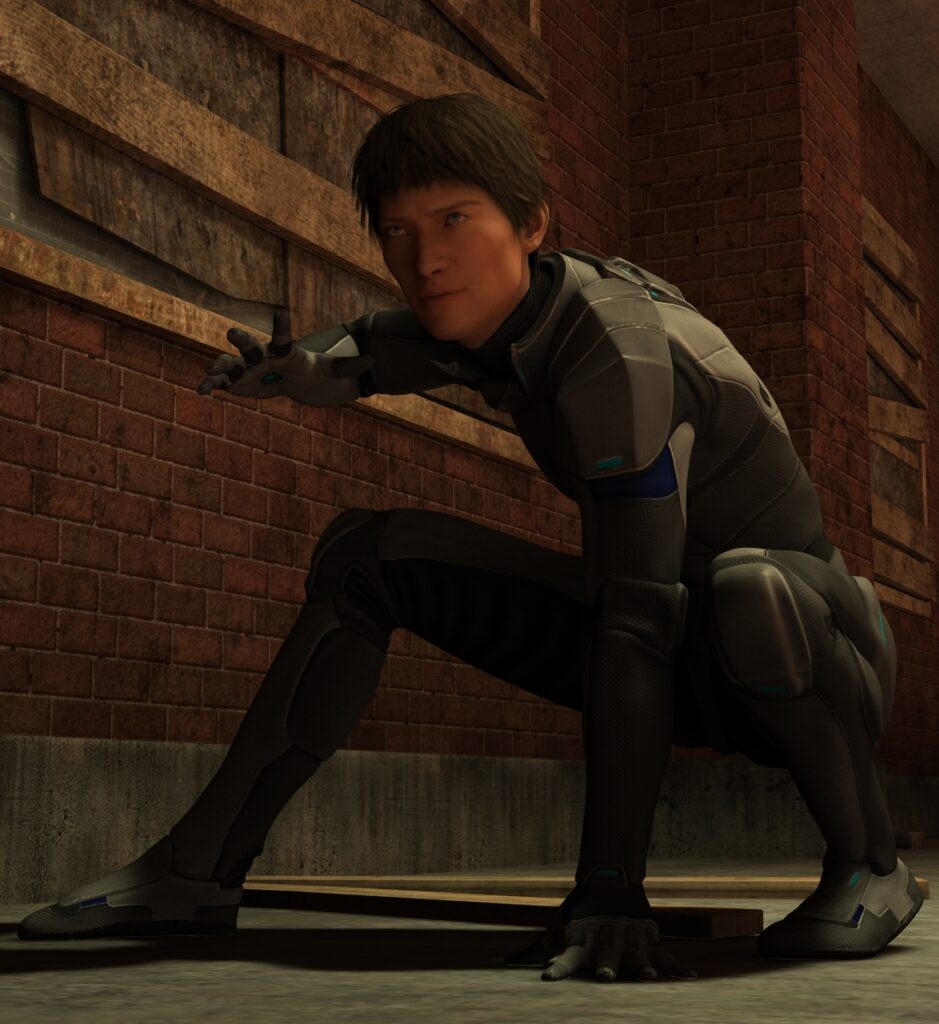 Able to boost one or more senses by shutting down the others, Focus is one of CLEA’s best crime investigators since he can do things on the spot that would normally require an entire team or lab, such as examining evidence in microscopic detail or tracking criminals who have left their scent at a scene.

Like many Aidan Curley was unaware of the fact of his Alpha status. The fact he never got ill when growing up was seen by him and his family as unusually good luck. Apart from that anomaly he had a relatively normal life growing up in England.

In his late teens the family moved to Europa due to his parents work commitments. This caused a few problems as he was due to start college but the situation could not be helped. In a new city without friends and his plans dashed Aidan wanted some stability and that’s when he noticed advertisements to join the Europa Police Department. When he’d considered a career upon leaving school he never once considered working for the police. In fact he had intended to study engineering and get a job in that area of interest. However with prospects of finding a descent college proving difficult that meant he had to find work instead so he took a chance and applied.

Having enough to qualify the minimum requirements meant Aidan was sure everything would go smoothly. However he did see a look of concern when he went for an official medical. Being reasonably fit he could not understand what the problem was until the doctor called him back later and then informed him in private that he was an Alpha Inferior. The revelation was certainly a shock and the look on Aidan’s face was enough to confirm to the doctor that the recruit had no idea of his “special” physiological make up. Having correctly guessed that Aidan did not know he was an Alpha Inferior the doctor had thought it prudent to call him back so he could address any concerns the recruit may have regarding his “condition”.

Aiden was the doctor’s first “Alpha” and though he had as much experience regarding Alphas as the recruit, being in the medical profession meant he had access to a lot of data and so the pair spend a couple of hours discussing the technicalities of being an Alpha Inferior. Since the revelation did not affect his ability to do the job he had applied for it did not affect the outcome of the medical and whilst the doctor felt obliged to mention Aidan’s potential on the official forms he decided to instead respect Aidan’s wishes and keep his condition a secret.
The last thing Aidan wanted when trying to start a career was for people to find out he was some sort of freak. The doctor had explained that the chances of becoming an Alpha Superior were extremely rare and so to all intensive purposes he was considered “normal” but Aidan was concerned that if word got around he would be treated differently.

Over the following years Aidan’s career in the EPD progressed well and he rose from the ranks of walking the streets until twelve years later he gained a promotion to a detective. During that time he never gave the fact he was an Alpha Inferior a second thought. However that changed at the age of thirty-three and his body started to change status.

Taking sick leave for the first time in his career was a surprise to his bosses but Aidan managed to bluff his way around the problem without revealing he was an Alpha Inferior nor the fact as he suspected, he was transitioning to a Superior status. All Aiden wanted was a normal life so after his light sensitivity dissipated and he felt fit for work he returned to his duties. He was of course aware that he was now an Alpha Superior but like most “newbies” he had no idea what his “gifts” were.

Unlike most other “newbies” it did not take long for Aiden to work out what his particular Alpha ability was for it soon became apparent that when concentrating on gaining evidence during investigations he inadvertently shut down some of his senses which had the effect of boosting the others. Using these skills he could literally see fingerprints or track suspects via smell as well as any dog. Overtime he learned to fine tune his ability and as he mastered that his success rate in closing cases improved to such an extent that his colleagues became jealous or though Aidan was up to something. At one time he ended up having a massive argument with his partner after he passed a comment suggesting that Aidan might be on the take.

Realising that unless he confessed to being an Alpha Superior things would only get worse at work, Aidan reached a crossroads in life. Still wanting an “ordinary” life, rather than admit he was an Alpha Superior he chose instead to quit the EPD and work for himself as private detective. By opting to do that Aidan knew he could use his Alpha ability as an asset without having to tell anyone about it.

Whether he wanted to hide his true potential or not, inevitably fate would intervene. Taking on more exciting and dangerous cases saw Aidan encountering his first Alpha Criminals when he became involved in a kidnapping case. The pair did not like his interference and he was very lucky to escape with his life since his gift did not give him any advantage in a physical confrontation. He was not the only one to investigate the high profile kidnapping because the Phoenix Alliance had become involved. They would be credited with solving the problem and Aidan was only happy to allow them to take the credit since he was able to maintain the lie he was “normal”.

Over the next couple of years Aidan ended up at various crimes and came into contact with other hero groups at an increasing frequency. As data began to build up his name resurfaced on the Phoenix Alliance files. The group suspecting something was “different” about Aidan and made formal contact. On this second encounter with the team Aidan finally admitted he was an Alpha Superior with the means to shut down various senses and boost the others.

As with every potential “hero” the group came across they tried to recruit Aidan but he was more happy to remain as normal as possible, despite the fact he was getting noticed by various vigilantes and powerful criminals. Unable to recruit him to their ranks but concerned that Aidan was destined to upset the wrong people, Phoenix Alliance leader, Gary Wynter offered a compromise. He had noted that Aidan could be vulnerable when boosting his senses which meant he was an easy target. Aidan though claimed he was okay but Gary warned him that if the Alliance had noticed the vulnerability then any potential enemy would notice it given enough time. Though he did not want any help Wynter made a few calls to the Knight’s Forge anyway and the end result of this was the Forge created Aidan a special lightly armoured suit which would provide him with some protection.

At first Aidan refused to wear the suit since he felt he was admitting he was not “normal” but after a few near misses with the wrong people he came to realise that if he was not careful his own pride would see him dead.
Whilst Aidan still likes to keep himself private he has on occasion leant his assistance to various hero groups including the Phoenix Alliance and when working with them adopted the codename “Focus”.

Unlike other heroes who can fight their way out of situations, since Aidan is no stronger than an ordinary person which caused him problems when he went after powerful adversaries. Realising he was far better at investigating crime than actually fighting it he eventually decided to join CLEA as a White Guardian where he would always have the backing of a larger organisation and would avoid entering into hazardous situation alone.