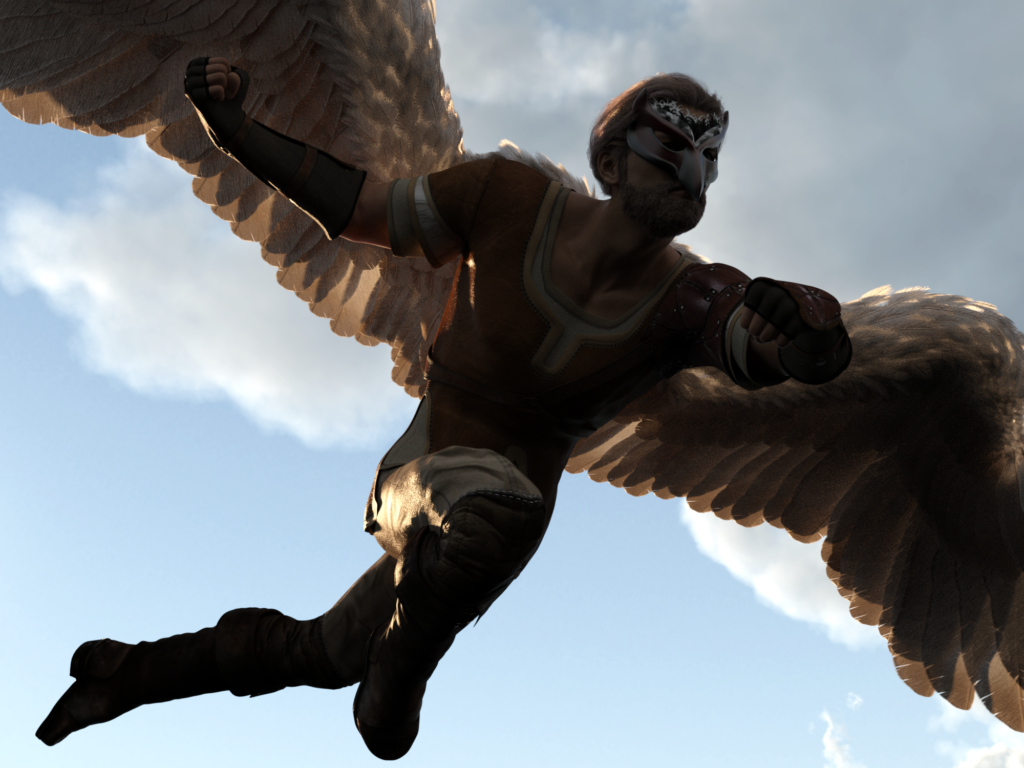 Vernon Hurst was at one time an honoured warrior for the People of the Firebird, a small tribe of animal hybrids in Canada who all had the means to transform into part human-part bird entities.

For information regarding his people’s origin see Tawny Owl

Whilst growing up with his people the only role he wanted to become was one of the tribal warriors. After receiving his adult name of “Harrier” upon turning eighteen he asked that he be allowed to try and become one of the warriors. His request was granted and he exceeded all expectations.

Nearly twenty years on from that time, Vernon had become the best of the warriors. That meant he was given the riskiest assignments, scouting near “human” settlements. The role was important as the tribe needed to know in advance if people were venturing on their land, that way they could all assume human guises and pretend they were just a tribe of “ordinary” people that had chosen to live in the Canadian wilderness.

Scouting duties therefore had be done very stealthily for Vernon knew that no human should witness him changing form. Ever since he could remember he had been taught that humans feared what they did not understand and should people in general learn that they were “different” then the tribe would be doomed. Despite this overall fear the tribal chieftain permitted trade with local settlements as a means to get items they needed through bartering. Of course before any traders could visit the tribe the people had to revert to the human form.

As the years had gone by and Vernon carried out his duties, he had the means and opportunity to witness humans first hand. All other members of the tribe were forbidden from exploring the wider world in case they brought back trouble. He was therefore fortunate since he could “see” quite a bit of the way humans lived their lives. One thing that always irritated him was the fact humans seemed to live in excess. Whatever they wanted they could get, yet his own people often struggled, particularly in winter. Often he felt he would very much like to sample some of those excesses for himself. Leaving the tribe meant banishment and his loyalty ensured that he remained with his “own kind”.

Things though changed for him when trucks belonging to McCabe Consolidated Industries moved into the area close to the tribal lands and started to clear the forest. Such an operation so close to home left the cheiftain with no option but to decide to move away. The chieftain’s daughter, Aisha had other ideas and wanted to find the man responsible for sending in the trucks and persuade him to leave them alone.

Fear of outsiders means the chieftain denied the request, since it meant his daughter would have to travel to a heavily populated area and that meant the world would find out about them. Aisha though defied him and went anyway. After realising she had gone the chieftain was worried what might happen to her.

Though he did not want any of their people getting seen in the outside world, he felt he had no choice but to send a second member of the tribe out into the world. That meant asking Vernon to go after her and return Aisha for her own good. The choice of warrior was easy for the chieftain as Harrier was not only the best but also had seen more than others when it came to the ways of man.

Having always been interested in the way humans could have everything but could not see fully for himself, the mission was an ideal way to see just how far advanced they were compared to the simply lifestyles of his own people. It took some time to locate Aisha. During this time he got to see large towns and cities for the first time. What he saw fascinated him but he had a job to do.

When he eventually caught up to Aisha she was formulating plans to find a way of meeting the owner of MCI, Andrew McCabe. At first she was pleased to see him, thinking her father had sent help. Then Vernon told her that he was taking her home as per her father’s instructions. She responded by attacking him. Though he was the best warrior the unexpected attack caught him off guard and she succeeded in stunning him.

By the time he awoke she was gone and it meant he had to start all over again in finding her. Then when he located her a second time he learned she had already met with McCabe. This meant he had failed in his mission and would probably be disgraced if he returned home.

Since he could not go back he decided he would explore the new world that had always been denied him. The bright lights and plentiful supply of everything seduced him. Of course he did not have any money but he was a warrior. One thing he had noticed in his time as a scout was that humans feared something stronger than them. Using that knowledge he started threatening isolated groups of people and demanding what they had on them.

Before he knew it, not only had he incorporated himself in the modern world but had found a lucrative means of getting anything he wanted as a criminal. In time other more powerful individuals that were not so easily intimidated by him would offer him work. Having slaved himself to greed, Vernon took on the work as it meant he could have even more.

Eventually Aisha came across him and seeing what he had become, she did not even recognise him anymore. Since she was now a hero she chose not to hand him over to the authorities out of respect for her people but warned him that if he had not changed his ways then the next time they met she would not be so nice.

The would meet again, on more than one occassion but their confrontations always ended in stalemates.