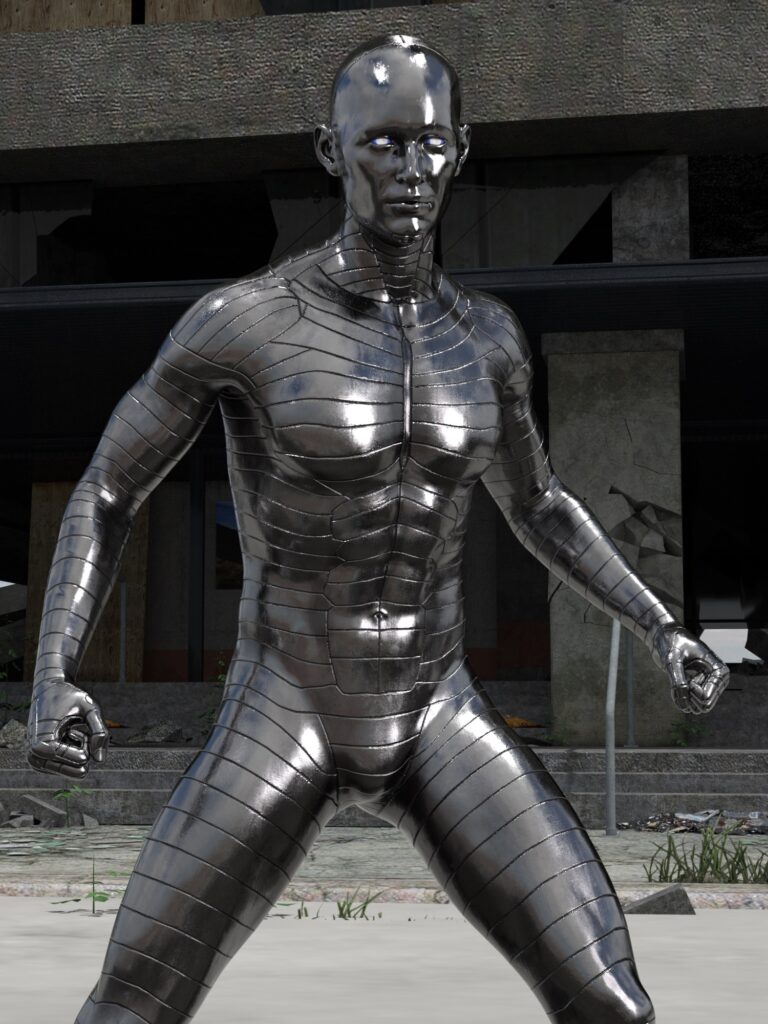 Greg Baker, Iron Clad was originally known as Carbon. He was never born an Alpha but became one after a serious road traffic accident when he needed a kidney transplant to replace his own which had been irreparably damaged. What the surgeons did not know was the donor who had died had been an Alpha Inferior. Nothing was on her medical records to indicate her being an Alpha due to an error on the files.

With the new kidney in place and part of Greg’s body he was actually “turned” into an Alpha Inferior. To this day it is still considered an impossible outcome since Alpha Inferiors had been used a donors before and since and there has never been another case of a non Alpha becoming “converted” in this manner, Greg is considered a medical anomaly.

It took months for him to recover after the accident but during this time he felt something was “different”. Wanting answers the doctors performed various tests and then the truth was revealed when they studied his medical records and learned that though he tested as being an Alpha Inferior he had been ill as a child. That was when the mix up with the donor’s records was discovered.

Though tempted to sue the hospital for negligence, Greg was happy to be alive and he did not see what he had to gain since most of the people that had taken care of him had been generally decent doctors and nurses. It somehow felt wrong for him to obtain compensation when his health was not affected and had ironically been improved by him being changed into an Alpha Inferior.

Two years onwards from the accident and enjoying the fact he never suffered from allergies of the common cold, Greg was surprised when his eyes suddenly became sensitive to light. At first he was not sure what was going on until he remembered that after the mix up had been discovered at the hospital, he had wanted to learn more about Alphas (and how it affected him) and somewhere in all the literature he had read something about light sensitive. A quick computer search later and Greg was aware that he was changing to an Alpha Superior.

Always grateful of the fact he had been given a second chance at life, Greg wanted to make the most of what was happening to him and give back something to the world. He therefore decided to approach CLEA since they seemed desperate to recruit Alpha Superiors for their White Guardian program. Despite the fact his light sensitivity had not abated he went to CLEA’s Europa office and made enquiries. Though he had yet to complete the transition CLEA were eager to get him into their program. He was thus with the organisation when the process was complete. Using their resources the organisation was able to quickly identify what Greg’s Alpha ability was and thus they learned he could mimic the Alpha ability on another Alpha Superior. He settled on the name Carbon (from carbon copy) which he used when on missions.

However it was not all good news for it soon became apparent that like most Alpha Superiors who had not developed “naturally” Greg’s Alpha ability was unstable. Around other White Guardians he would switch powers uncontrollably which made him more of a liability than an asset. To get around this problem he was placed in a special team where he was the only Alpha Superior. This at least gave him some control for all he needed to do was copy the ability of an Alpha Superior and then stay clear of them. Like the Gemini Twins with Team Zodiac, Greg was very useful to provide back up when an White Guardian was needed in to places at the same time.

For three years he served CLEA without incident and proved to be a valuable asset. However Greg was all too aware that he would eventually enter a situation where whatever safeguards were in place it would not be enough and he would become a danger to those around him. That day came when the Justiciars attacked a research complex on the outskirts of Europa and they were being supported by Chaos.

With the danger they represented CLEA scrambled as many White Guardians to counter the threat which had turned from a stand-off to an all-out battle. Aware that the situation was getting out of hand CLEA top brass issued a code red which asked for outside help from amateur vigilantes. As Europa was the home city of the Phoenix Alliance joined the battle and a few other Alpha heroes.

Greg tried to keep his distance from other heroes and White Guardians as they converged on the complex but after Chaos rebuffed the attempt to retake the facility, Greg found himself close to Miss Fusion. The inevitable then happened and he duplicated her powers but unlike “normal” the process did not seem correct. Something was wrong, or rather different.

Out of desperation he tried to get close to another Alpha Superior in the hope he could reset whatever was happening by mimicking someone else’s powers but nothing happened. Whatever had happened when he had inadvertently tried to copy Miss Fusion had somehow changed him permanently and he was starting to mutate in a manner never seen before. Rapidly the cells in his body started to transform into pure energy shedding his organic form which had the effect of creating an exponential build up that he knew was reaching dangerous levels.

Miss Fusion tried to syphon off the excess by absorbing it in her “star” form but that only set her on the path towards a nova discharge and it did not stop the chain reaction in Greg’s body. Miss Fusion did all she could before having to launch herself into the stratosphere to eject the excess mass and avert a catastrophe but without her help Greg instinctively knew if he could not gain control on his own he would level half the city.

It was at that moment that Chaos and the Justiciars chose to use the distraction to make their escape.
Meanwhile Greg was thinking fast of a means to prevent himself causing a disaster but the only way he could guarantee everyone’s safety was by making the ultimate sacrifice. He therefore called to the mixed group of vigilantes and White Guardians and asked them to kill him.

Since he was now pure energy that was not an easy task and with every failed attempt valuable time was being lost. When all hope was lost Aurora arrived. She had sensed a disruption in the Earth’s magnetic fields and tracked it to the source. Without checking with anyone else what the plan was or even if there was a plan she rapidly began sealing Greg in a cocoon of built from scrap metal she manipulated from the debris.

There was no explosion so whatever she had done had saved the day even if she had killed Greg. However when the cocoon was scanned there were still signs of life on the inside. The metal was somehow containing the energy which meant Greg could never be free and since he was pure energy that meant he would forever remain imprisoned. Aurora’s conscience could not allow Greg to suffer that fate so she compromised and manipulated the metal again so that it took on a human form, albeit something that was not exactly pleasing to the eye. In that moment the White Guardian known as Carbon was no more and “Iron Clad” was born.

After the battle was over Greg fled the area. He felt he was no longer safe to be around. For months CLEA looked for him since they did not want to lose one of their valuable White Guardians but he managed to avoid their efforts. No longer human and wearing a monstrous form Greg had much to deal with. He did not blame Aurora for his current look as he knew she had acted in everyone’s best interest.

In time he eventually learned to accept what he was and after learning how his mutated form “worked” and he could control it he decided to return to civilisation to fulfil his original promise of giving something back to the world.

As Iron Clad, Greg has immense strength since he is pure energy inside the metal shell. He also has the means to radiate heat and microwave energy from his external body or produce a focused beam of the same energy his eyes or mouth.