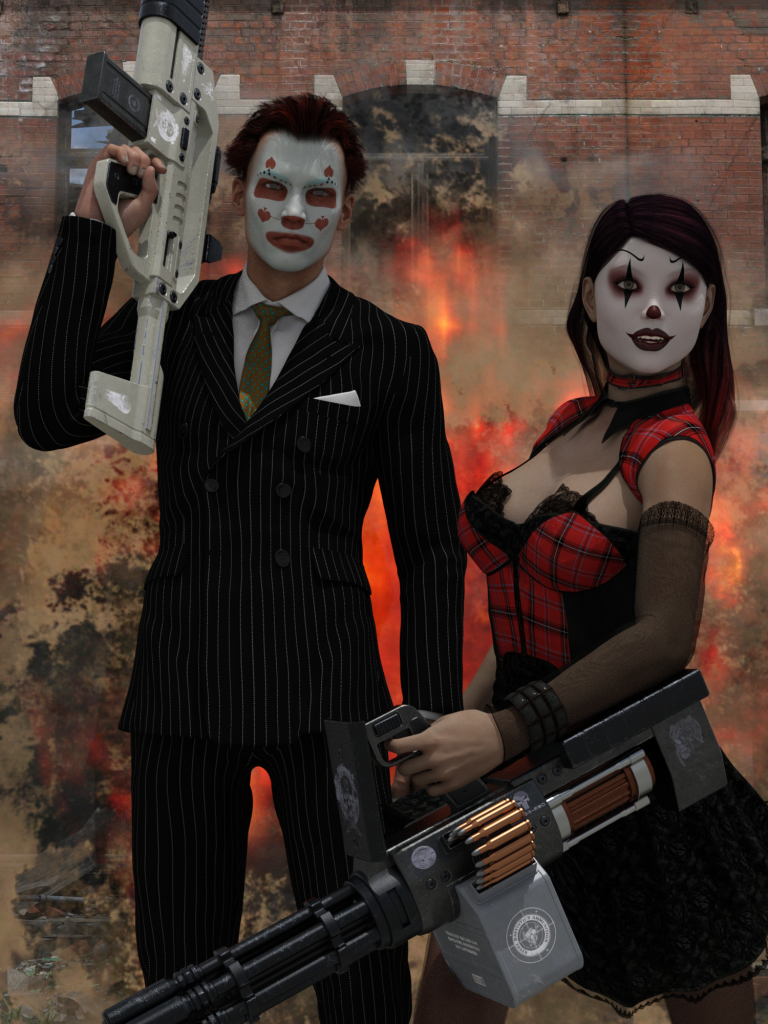 Dwight Henley, a dentist in Europa and his dental nurse Lisa Armstrong path to becoming the duo Lethal Joke was down to the work of the crime boss Ragnarok. At a time when they set up a small fledgling practice in the city, Ragnarok was desperate to find an Alpha Superior “sample” to pay for the Broker’s services.

He had instructed his gangs to put pressure on medical personnel with access to records, in a bid to locate an Alpha or a candidate that bore the telltale traits.The dental practice fell foul of one of the gangs. The pair were threatened with harm to their friends and families if they did not comply.

Naturally scared they did as they were told, acting out of fear. Their actions continued for a few years and any time they looked like they were wavering in their “duties” the gang would show up and ensure compliance. After the practice was firebombed during the day with patients inside, Dwight finally decided that he could not take it any more and despite the possibility of retributions, he went to the Europa police along with Armstrong.

Ragnarok got to hear about the pair trying to expose his operation and would normally have had them killed. However at the time he was looking to bolster the strength of the Jotnar after the Scorch Blade clone did not turn out as good as the original due to her limited ability to heal. The Broker had explained that clones did not work well with Alpha abilities that’s why the preferred method was to transfer an ability onto another human host.

Rather than simply have Armstrong and Henley killed, he had them brought over to America, where they were handed over to the Broker to be used as “vessels” to hold the Alpha Healing ability stolen from the original Scorch Blade.

As with all the “creations” performed by the Broker’s boss, the original hosts’ memories were purged and in this instance, Ragnarok wanted some of their personality traits adjusted.Now no longer able to remember who they were but instinctively loyal to Ragnarok the pair joined the Jotnar. Having had some of their inhibitions removed, the pair tended to act impulsively as well as unpredictably making life difficult for the other as they could quite easily screw up a planned operation by inexplicably committing a random violent act. The gene engineering was not perfect and the skin on their faces took up a scarred appearance but their new programming meant they simply did not care.

When the other Jotnar started to complain about the actions of the pair Ragnarok insisted they learn to deal with their new comrades but three months later everything changed. The healing factor implanted in their bodies started to repair their memories. At first it was small snippets, like memory flashes but as Armstrong and Henley worked together to understand what was happening they combined their small memory segments and started to fill in holes. This sped up the process of the memory restoration and they soon knew who they once were and what had been done to them.

Though they had lives and families to go back to, the pair realised that they were different due to their personality adjustments. They had been given a taste for violence and mayhem which meant they could not go back. The pair felt if their families had thought them missing or dead then they should stay that way. Whilst they could have simply fled, the pair had been trained to be ruthless in their work for Ragnarok as part of the Jotnar. Their old selves might have just vanished into the night but their new selves decided to make use of their gifts and use it for a spot of revenge.

First of all they turned on the other Jotnar and nearly killed them. Then they settled for bringing down Ragnarok as they took what he had done to them as “personal”. Before going after the crime boss directly they decided they needed some money and so went to some of his warehouses and robbed them.

Ironically the path of destruction and the fact the pair were not at all bothered about covering their tracks, soon attracted the media. Realising they could be picture, the pair managed to salvage some degree of sanity and decided for the sake of their families they should cover their faces and so they chose to wear clown style make up and go by the names Mr Cheerful and Whimsy. This led the press to dub them “Lethal Joke” a moniker they were quite happy with.

Continuing on their campaign against Ragnarok they crossed paths with heroes who had similar goals, albeit any alliance was often short lived due to their crazy antics. Though they never set out to become heroes anyone “bad” that crossed their path would be subject to big trouble since they still had a partially functioning moral compass between them. Despite their twisted logic, they had one rule, and that was they were never going to harm innocent lives.

One ally they did meet on their quest to defeat Ragnarok was Counterthrust. She also wanted revenge but there was some friction between them and her because she saw their healing ability as something that was copied from her, a reminder of her past with the Jotnar.

About the most oddest problem for Lethal Joke is the crime gang that would become known as the Comic Crew. The entire team of ten were nothing more than a bunch of individuals with Alpha Superior abilities that were highly unstable. They wanted to find the Broker in order to find out who was behind their genetic manipulation. Since then had learned that Ragnarok had made deals with the Broker, the group had thought going through the crime boss was the best was to get to the Broker. As none of them were fighters  and had any experience with criminal types, they had come looking for help, knowing that Lethal Joke were trying to take down Ragnarok’s organisation.

Henley and Armstrong were suspicious of anything new so the initial meeting was difficult. Eventually they reached a deal that suited everyone. In exchange for getting them closer to the Broker,   the ten newbies would assist the duo in their ‘war’ against the crime boss. This the group agreed to, albeit the admitted they had no idea what they were doing. Lethal Joke therefore decided to train them and once they were ready to fight Ragnarok’s goons they became the Comic Crew, and dressed up in clown gear like Lethal Joke, keeping in with the theme.

For a while the partnership worked well but as time went on the Comic Crew’s views on chasing the Broker started to change. They had learned to work together and get around the short comings of their Alpha abilities. They had embraced what they were and noticing how Ragnarok had gained everything he wanted through power, the Comic Crew started to be tempted by a life of crime.

Lethal Joke tried to stop them from going in that direction but things came to a head when money became tight. The Comic Crew could not resist their dark urges and longer and decided to rob a bank. This broke the only ‘rule’ Lethal Joke had and they took the robbery as an insult.

The team fell apart shortly after that and Lethal Joke and the Comic Crew parted company. Henley and Armstrong returned to their war on Ragarok and other scum whilst the Comic Crew started to enjoy the high life, paid for by crime against others.

Though Lethal Joke have never specifically targetted the Comic Crew like they have Ragnarok and even the Broker, the consider the clown criminals to be their mistake which means whenever the importunity arises they have not wasted a chance to deal them a blow.