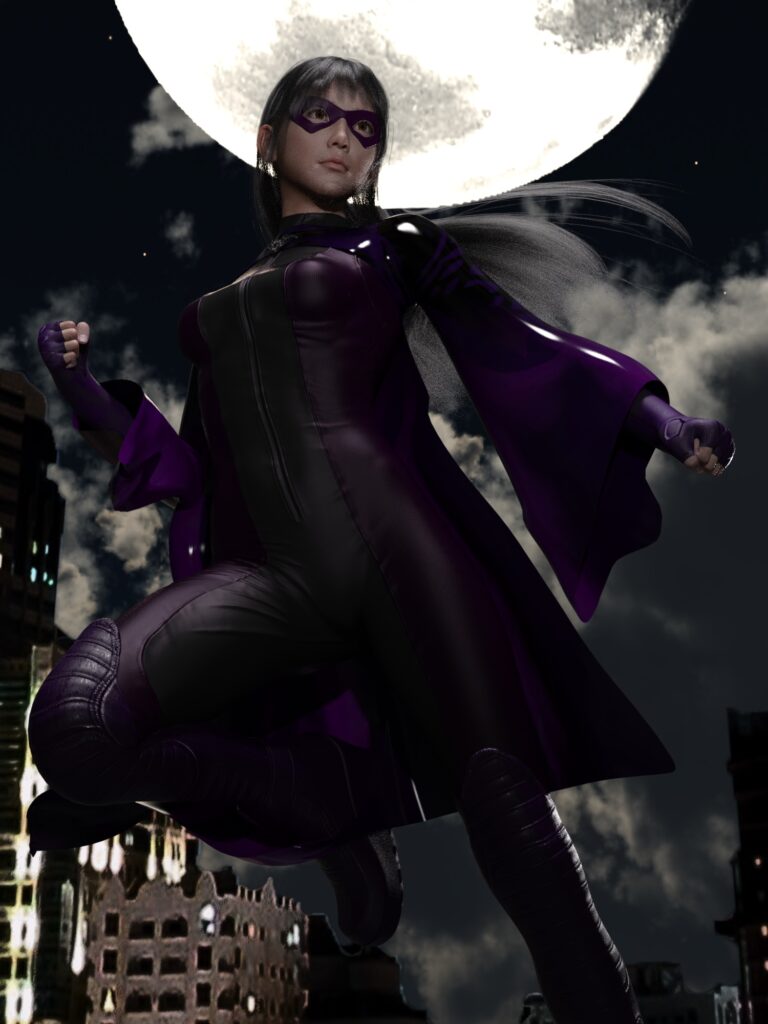 From an early age Koharu Maeda was brought up by her Grandmother Hana in New Tokyo after both parents had been killed in “unusual” circumstances. At the time Hana worked for CLEA and with a double family tragedy was able to get a few favours. That was how Hana learned that her daughter and son-in-law had potentially been victims of Black Shadow.

Knowing the Black Shadow only murdered Alpha’s Hana suspected that either her daughter or son-in-law was one. To satisfy her mind she had a CLEA doctor test Koharu and then was told Koharu was an Alpha inferior. Since CLEA was aware of Black Shadow they suggested that they both might be a target but Hana wanted her granddaughter to have as natural upbringing as possible under the circumstances so refused the offer.

Not wishing to burden Koharu with the knowledge that she was an Alpha with the future potential to become something greater, Hana withheld what she knew until Hana’s eighteenth birthday. By that time Black Shadow had suffered a major blow by Team Zodiac and effectively all Alpha’s were safe from assassination. This was of great comfort for Hana since she knew Koharu would be safe.

Though it was quite a shock to learn why her parents had died and that she was an Alpha, Koharu loved her grandmother dearly and so chose not to let the revelation come between them and they enjoyed another two years before a sudden illness took Hana from her.

Always confident and outgoing Koharu had no problems coping with life on her own. Having already been made aware that she was an Alpha when her abilities activated around a year and half later she was neither concerned nor frightened. Unlike others who had a hard time realising what abilities they had gained in Koharu’s case she learned pretty quickly by researching into other Alpha’s and a small time of experimentation.

Doing this she learned that at night she had the ability to levitate although it was more like gliding than actual flying since she could only travel upwards if she used forwards momentum via her feet to gain speed. Luckily for her she also gained a slight speed and strength increase. During daytime however trying to use her abilities only brought her intense pain. The key to her abilities was light, but too much light such as daylight had an adverse effect on her. She would feel her bod literally start to burn up.

Staying in area lit by moonlight though seemed tricky until she discovered that though too much light was bad, sustained moonlight could be retained like a battery. This would allow her to more into dark areas but not for any great length of time.

Knowing what she could do left her with only one decision to make, should she use her gifts to help others or keep them a secret. In Koharu’s case there was no choice since her grandmother had always instilled the idea that anyone with power should help those weaker. Koharu suspected that Hana had been preparing her for the day this decision arrived. With the death of her parents by Black Shadow, Koharu liked the idea of taking the fight to criminals and so began operating in New Tokyo under the alias of Luna.

Always keeping an ear open for rumours Koharu would eventually learn of a new Black Shadow that had been formed although every criminal and thug she stopped appeared to have no links to the new organisation. She therefore assumed she would never encounter the new crime syndicate despite having a burning desire for revenge.
It was therefore quite ironic that one night whilst on patrol that she came across a native Australian (Bilyana Tjungurrayi) being attacked by the Shadow Squad. Koharu knew all about the Shadow Squad and their links to Black Shadow so she was not going to hold back when it came to protecting an innocent form them.

Taking on four opponents at once though was perhaps a mistake. However the ‘victim’ seemed strangely adept at planting his boomerangs at weak points. She had seen accuracy before but never accuracy repeated. Even with both of their skills they were outnumbers and so she was lucky that the Ring of Steel showed up and saved her and Bilyana.
Once taken back to the Knight’s Forge, Koharu learned that his family had been massacred by Black Shadow and that only renewed her hatred of the crime syndicate.
The Knight’s Forge warned Bilyana that he would be a target but he refused to go into hiding. It was then that Koharu guessed that his “unnatural” ability to throw perfect shots with object might be an Alpha ability and the Knight’s Forge tested and confirmed her hypothesis.

Koharu then suggested that with an Alpha ability that Bilyana might want to take the fight back to the people that were responsible for the massacre. Bilyana though explained to her that his way did not involve revenge. Rather than pushing him to hunt Black Shadow which was really her fight, Koharu proposed that since he did not want to go into hiding then he could stay at her place whilst he came to terms with his loss and got his life back in order.

Whilst he stayed with her and worked out where his future path lay, Koharu maintained her nightly patrols and it intrigued him. Eventually he approached her and suggested that the skills he learned in the bush might be useful to her crime fighting. Though he explicitly stated he would not seek revenge Bilyana did think he could make a difference to the lives of others being affected by crime.
Kohura was not so sure since she imagined that crime fighting was a solo pursuit for her and she did not want the responsibility and putting another person in danger nor did she ever want to place her life in the hands of another. However Bilyana seemed to be insistent on the matter and so Kohura agreed to a trial period.
At first she found his tracking skills most useful to guide her in the right direction and then as time progressed he began to take a more active role, fighting at a distance with his ranged attacks courtesy of his trusted boomerang.

Together they began a crime fighting partnership and made their little area of New Tokyo a no-go zone for crime but after a couple of years Bilyana expressed a desire to head ‘home’ to learn what had happened to his family’s land.

That was the last she saw of him for three years and once back in the city he met up with her and expressed a desire to return to crime fighting, only he had to make his own path. Though this meant a formal end to their partnership, Koharu understood.

She then returned to fighting alone but has occasionally teamed up with Bilyana now using the alias Rebound. Her experience with him gave her the confidence to work with others and so around New Tokyo she is relatively well known in the hero community. As soon as sun goes down she goes active and criminals knew they have to be careful when operating in Luna’s territory.