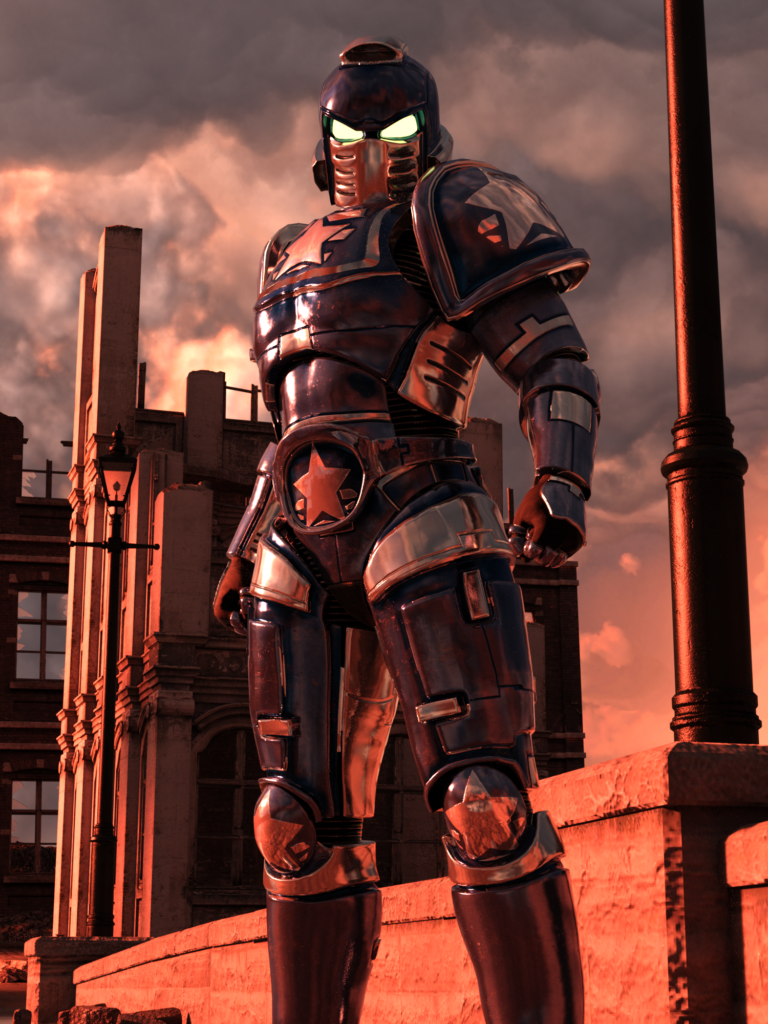 Meteor is a powered exo skeleton armour designed and built by the late Kyo Nomura who also created the Red Ronin remote control automaton. Meteor was created as an interim project to create a sensory input suit for what would become “Outreach” the precursor of Red Ronin.

Unlike the latter two robots which would operate remotely and thus keep their human users from harm, the nature of Meteor being essentially a “wearable robot” meant that its operator was still at risk. However Kyo only wanted to create the unit in order to test the viability of his sensor suit. To this end, though the wearer of Meteor was surrounded by an artificial outer “skin” the inner sensor suit provided the pilot with real sensual data enabling them to experience the world as if they were wearing ordinary clothing.

Those that test piloted the suit complained that it was cumbersome and physically demanding but overall Kyo’s design was a success. Since it was never meant to be used other than a stepping stone towards his end goal of a fully remote automaton, Kyo was not too disappointed about the criticisms about Meteor. He had no real use for it as the design was simply a means to an end.

However he did have bills to pay and this was around the time the Raiders were making themselves known to the world and causing all sorts of problems for local and international authorities everywhere. Kyo therefore decided to refine his design and make it suitable for military use. He envisioned a solution to the Raider problem in the form of mobile armour.

To reduce the physical demands on the wearer he added power servos which were then tied in with the inner sensor suit. This reduced the physical load to such an extent most wearers were not even aware they were wearing such a bulky exoskeleton. Since the unit was going to be used by the military Kyo beefed up the outer shell considerably. The extra weight and thickness of the armour meant that when it worked with the servos the wearer was not only well protected but could do feats that matched industrial equipment.

Even without the use of external weapons and ordnance the wearer could cause considerable damage by punching through walls or acting as a battering ram. Putting it simply Meteor was not just a weapons platform but a weapon in its own right, or that’s how Kyo’s people tried to market it. However the military forces around the world were not interested in the hype and when it came down to costs they had plenty of cheaper “solutions”. With no buyers Kyos decided to put the armour into storage and move on. As far as anyone was concerned the project was scrapped and Kyo hit evidence about its existence. He wanted the world to think the design was dead because he feared if the wrong people got their hands on his tech they could do a great deal of harm.

Though he hid the record a few of his staff who helped build the unit were aware of the truth and kept it a secret. Dwaine Washington was one such person and though he left Kyo’s employment long before his untimely death, he always viewed Kyo as the first person to give him his lucky break.

After leaving Kyo he took some of his ideas and managed to patent several innovative electronics designs which made him very rich in a remarkably short period of time. Being good with circuits but not an engineer like Kyo meant he had largely forgotten about the Meteor until the news reports came in of the death of the man he admired. It shocked Dwaine greatly because it seemed such a waste and what irritated him the most was the person who was behind the murder was the Mechaniac a person Kyo had taken pity on and tried to help when nobody else was interested. Dwaine viewed the Mechaniac’s actions as an insult and wished there was something he could do, to perhaps teach the man that there are some crimes which justify revenge.

However there was nothing he could do so Dwaine had to take solace in the thought that one day the Mechaniac would receive his just desserts. Then came the day news cameras caught Red Ronin in action. Having worked on the Outreach project, the precursor to Red Ronin he recognised the design. He had no idea who was controlling the unit since as far as he was concerned creditors working for Kyo distant relatives seized all of the company assets following his death.

That was when Dwaine though about Meteor. He figured that if Red Ronin had “escaped” the creditors then the earlier design might also be out there and whilst he could never built such armour from scratch he could certainly pilot it and take the fight back to the Mechaniac. To this end Dwaine began using his fortune to buy up any assets of Kyo’s when they came up for auction.

He’d spent thousands on obtaining a whole host of “useless” items and equipment until finally fate had a change of heart when a storage unit that once belonged to Kyo’s company was getting auctioned off. Located on the edge of New Tokyo the run down storage depot looked like a total dump and Dwaine was unimpressed and felt he had wasted his time. However since he was there he decided to join the bidding anyway because at first glance most of the unit seemed to be paperwork storage and scrap metal as well as other assorted jumble. He figured he could go through the paperwork and having worked for Kyo might know what to look for that would get him closer to finding where Meteor had been hidden. It was of course a gamble but he did manage to win the auction without a huge dent to his bank account.

Having “purchased” the junk nobody else had wanted Dwaine had the opportunity to take a proper look at his prize and far from finding a much needed “clue”, he discovered something better. Under a tarpaulin at the back of the unit was a large crate, inside of which was what he had been hunting for, the Meteor.

To keep his discovery a secret Dwaine hired a business unit and took the contents of the storage unit there. Not having a family meant he had plenty of time to work without being disturbed. The years had not been kind to it and since he knew more about electronics than mechanics, his progress was slow. Twelve months passed before he finally got Meteor to show some signs of life and once he got it up and running Dwaine decide it was time to test it. Obviously chasing after the Mechaniac was stupid until he got to grips with understanding how Meteor worked so Dwaine decided to start small and cause trouble with the low life predators that preyed on the unsuspecting innocents under the cover of darkness. Before setting out on the streets Dwaine first of all decided to add some embellishments to the armour to make it seem even more imposing. There was only one person he wanted to actually hurt so he preferred the idea of scaring others out of the way, even if they perhaps deserved a thrashing.

Very quickly Dwaine discovered that more people wanted to fight back when he interfered with their crimes, which rather surprised him. He even ended up squaring off against powerful adversaries and such fights never went unnoticed which was how the world came to hear about the vigilante in New Tokyo called “Meteor.”
Over time Dwaine has managed to make allies with other heroes but still prefers to work alone despite several offers from various “teams”. He has even squared off against the Mechaniac or his cohorts on more than one occasion but bringing Kyo’s murderer to justice still evades him.