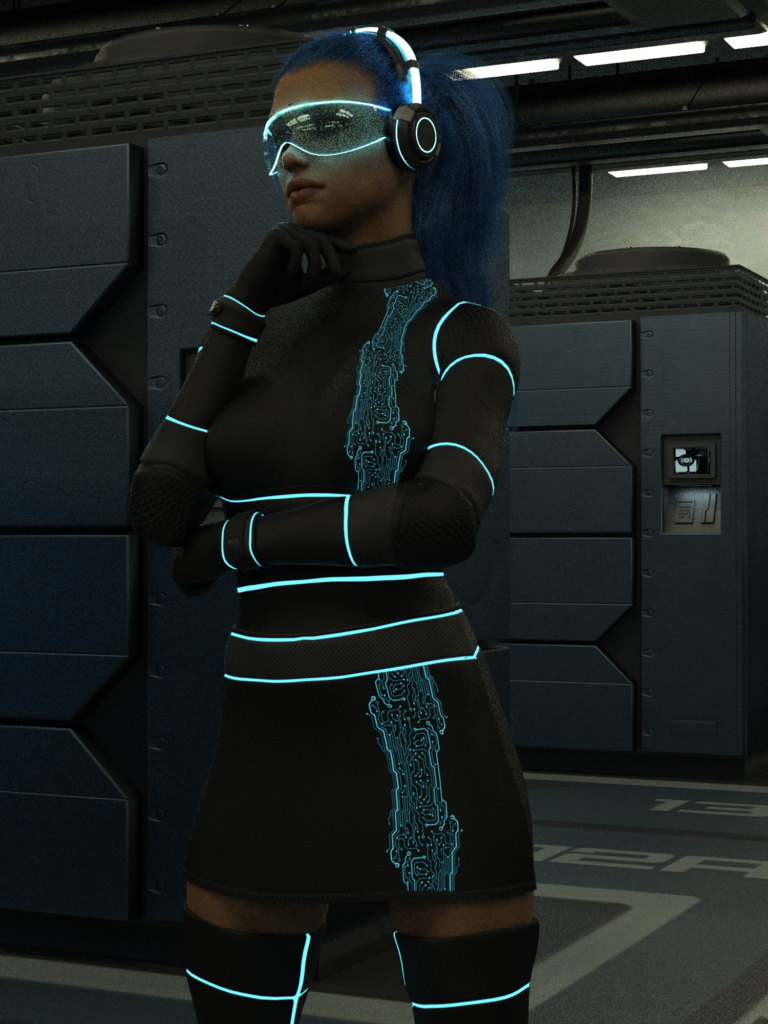 At one time Cayla staunton was an “ordinary” individual. Her life changed when she saw an advert that was seeking test subjects. The advert claimed it was trying to fix mental health issues by the use of cyber implants. Though as with everything there was always a risk, at the time Cayla was desperate for money. Her job did not pay well and every week there was another bill to pay. Taking part in the trial seemed an easy way to solve her money worries.

She duly filled in a form and two months later was on the way to the first introductory session. The paper work had explained that an initial series of tests would be needed and from that only “suitable” candidates would be chosen. That was a concern for Cayla knew if she did not have what they were looking for then she would be back to square one.

As luck would have it, she was one of those selected and was made part of the test program. Her first inkling that things were not as they seemed was when she had to fill in a disclaimer that seemed to have more paper than a telephone directory.

Despite being suspicious she genuinely believed that she was actually helping people with the added bonus of getting paid. As the test program got under way she soon started to consider it a mistake for over a period of a few weeks doctors began injecting small implants into her head. Despite the reassurances this was quite painful and afterwards she ended up experiencing intense headaches. Cayla was told that the implants were designed to create enhanced neural pathways in the brain. In brain injury cases such pathways could bypass an injury and effectively give a patient his or her life back. The tests though needed to be done on healthy people as a benchmark.

Though what she was going through was tough, Cayla endured it and the process started to become easy. Over the months returning to the hospice she did notice that fewer people like her were showing up. She never could forget a face. On each occasion, after injections she would come back a week later for a follow up appointment with scientists. They would place a kind off helmet on her head and connect it to a computer and run various tests. This she was told was to help map check the status on the implants and see if new pathways were being made.

The life she knew came to an end when during one of the these tests, once they put the helmet on her and turned on the computer it felt her head was on fire. The scientists seemed to get very excited about this and one of them ran off. A few moments later she saw the scientist talking to a couple of men in suits. In the mean time the pain had gone and then “it” happened. She could “see” the computer that she was connected to.

At first all it was seemed to be jumbled code and then clarity. It was as though she could read the data like a book. Curious she went down the data pathways and learned that she was not helping injured people but was part of a government program, “Project Eavesdrop” to try and merge the human mind with a computer, the goal being to create a living weapon with the means to invade enemy computer systems and gather intelligence

Cayla now learned that the other test subjects that had vanished had actually died and she was one of three that had survived. All this information she picked up in the blink of an eye. It was at that point that the remaining scientist in the room realised that she was accessing the computer and ripped the helmet off her head to stop the security breach. However he mind and the implants were now acting as a transmitter. She did not need to be physically connected to a computer to read it since she could piggy back onto a wireless connection.

Personnel records now came whizzing into her head and she realised that the man in the suit was the person running the operation. As she was a success his intention was to send her to a black site for study and “training”. Figuring is she did not comply she would “disappear” Cayla knew she had to escape. Before the scientist with her could raise the alarm she sent his computer display a hypnotic pattern.

Heading to the door she discovered she could access other networks and so distracted the other scientist and the suit by having their mobile phones start ringing. By the time they realised she had got past them she was out of the building. Since they had obviously “triggered” her implants into working, whether by accident or deliberately it became apparent to Cayla that her abilities were developing at an exponential rate. Though clear the data she had amassed indicated that the types of people that had modified her would not simply give up.

In this respect she was right. For several years she was chased relentlessly. All the while her abilities improved. Anywhere there was some computer network she could lock onto it and gain access to any other computer system that was linked. Over time she found she could build data profiles that would allow her to make digital predictions based on data patterns in cyberspace.

In time she learned that since her escape the government had shut down the program but that did not stop people coming after her. Some wanted her to work for them whilst others viewed her as a security risk and wanted her dead. Though they could keep on finding her, being able to “see” security camera images in her mind meant that by the time they got to her, she was gone.

Her only weakness was that with having a permanently active computer in her head she could never sleep, unless she sealed herself inside a makeshift Faraday cage. That at least gave her some respite and quiet but at the same time allowed enemies to get close. Her head as a living computer terminal also resulted in her having intense headaches as she could not easily sort out the data easily.

Finally she got the peace she so badly wanted when she picked up data about the reclusive billionaire, Lance Mickelson who had not been heard of for over a decade. She found it unusual that unlike other celebrities that chose to hide from society he did not have a digital footprint other than money transfers. To all intensive purposes he had hidden himself physically and electronically. However something had changed and there was every indication he was building something on his private island.

Data patterns and copies of blueprints suggested it was some sort of holiday resort but there was nothing to indicate that in the global leisure business which meant something else was happening. Since Lance had found a means to stay hidden, something she wanted to do herself just to find peace, she reached out to him. He was quite surprised that someone was able to even make contact with him but after she enquired how he had managed to keep himself isolated and her reasons for wanting to know why, Lance invited her to his island.

As Cayla had indicated in their initial conversation she knew he was building something he did not have a problem telling her about his idea for a holiday resort for “heroes”, a means of giving back to people that dedicated their lives to helping others. After she had initially contacted him, Lance had thought that the resort might also have a secondary role in becoming a safe haven for people with powers and abilities that made them a target for organisations through simply existing. He and his partner, Nina Dupont had wondered how they were going to staff the resort. Lance figured that people like Cayla who were not interested in fighting and just wanted to be left alone might be the answer if she was interested.

Being offered the chance to stay somewhere permanent and no longer needing to run, was an offer she could not refuse. The work her proposed her to do not only made use of her unusual abilities but helped serve an important purpose security wise. Though his intention was to provide a much needed retreat for hard working heroes he could never be one hundred percent sure that they were not being duplicitous in some way. He wanted to avoid bringing people to the island that would cause trouble. Not one for being a fool he was aware that some “heroes” were in fact villains, playing roles to lull their targets into a false sense of security. Though they could wear a front, Lance believed that digitally they would be far harder to hide suspicious activity.

As well as performing security checks on potential guests, Lance wanted Cayla to locate others that were just like her, being hunted by agencies who wanted to use their gifts as weapons or eliminate them for the same reason. Since she was able to correlate vast amounts of data and produce logical outcomes Lance also wanted Cayla to find potential “assets” that would be good for the operation of the island as well as assisting her other work. The search criteria given to Cayla was very specific for both groups in that they had to not be trouble causers. People like her, that had only defended themselves were the only exception to the “rule”.

In working for Lance she chose the codename “Network”. As part of her accommodation he had all the walls of her room embedded with a mesh so that she could escape the outside electronic noise when things got to much. This meant that as well as finally having to stop running she could actually find piece.

One of the first people Cayla found that she thought ideal for resort operations was TTR. A powerful magic wielder with the means to teleport anywhere on the planet, he seemed perfect to eliminate the only weak link on the resort’s security, transporting people to and from the island.

In time she would learn of another Project Eavesdrop survivor, Josiah Hicks. Unlike her he had chosen to protect himself by turning criminal and get protection from powerful but illegal allies. By the time she found him, Cayla’s headache’s had all been cured after Doctor Psy had realised that the source of the problem came in processing data. He solved this by creating a set of goggles which when linked to her implants allowed to to visually organise the data. The irony of this was whilst she had suffered for years, Hicks had been “fixed” by a similar method a long time earlier courtesy of Dr Blacksmith.