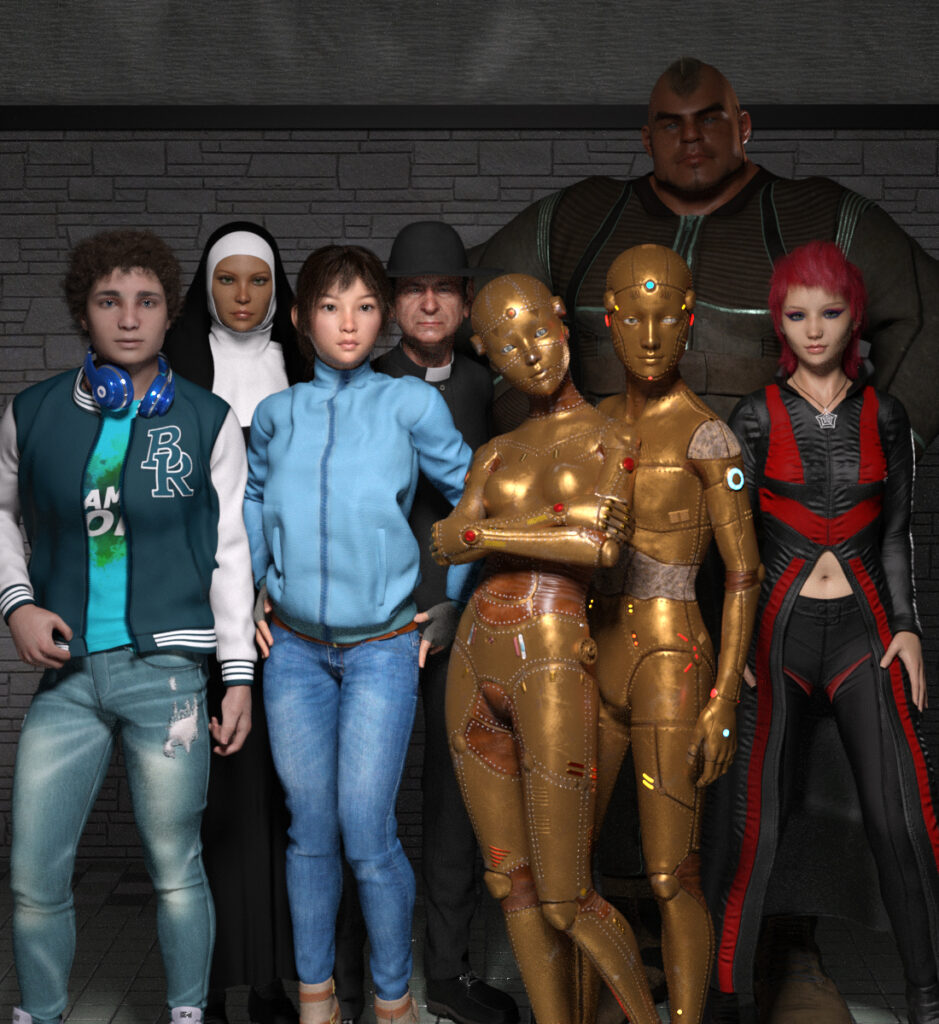 By all accounts a very secret group and would never have been uncovered if it was not for CLEA’s small “Mystical Department”.  To most the group is nothing more than a Priest and nun who run a small house looking after “troubled” teenagers, in an equally troubled neighbourhood. This would never have raised any eyebrows if it was not for CLEA researching into mystical anomalies and noticed that some of the people claiming to fight against dark magic, happened to visit Father O’Connor on more than a regular basis.

Researching further and combining with street rumours, it was learned is the stories can be believed that O’Connor was once an Angel, David, who grew tired of watching Demons bend the rules regarding the truce between the Light and the Dark realms. Having noted that youngsters who were desperate were vulnerable to being tempted into deals from Demons, David wanted to do more to stop such lives being corrupted and souls being forfeited.

Unable to take direct action against the Demons responsible since it would start a war, David took the unusual step of asking the Archangels to allow him to live in the mortal realm as one of them. The only time this was done was when an Angel was punished for breaking the rules. No Angel had ever volunteered for it.

Realising he was unhappy, the Archangels accepted his request. They bound his special magical abilities and removed his memories, replacing them with new ones. By doing this the Demons could never argue the Angels were breaking the truce since David to all extensive purposes was a mortal, and under the agreement between the Light and Dark realms, mortals had free will to choose their own actions.

For twelve years, David lived as a Priest, known as Father O’Connor unaware of his true past. He still held onto the desire to help youngsters and so during that time he had opened his home to troubled youngsters, whom he set on the right path.  However no longer possessing knowledge regarding Demons and the occult meant that he could not direct his focus on the reason he had chosen to become a mortal, namely preventing vulnerable youngsters signing their souls over to Demons. A chance encounter with a young teenager claiming to be possessed by a Demon would change all that.

Though he had his faith, O’Connor was not sure about the claim of being possessed by a Demon, especially when the woman trying to help the teenager also claimed to be a witch. He did still want to help since the child was in his parish and felt he could at least be of some sort of emotional support.

In truth he did not really believe in Magic of any description, since such knowledge had been removed from his mind so he was not entirely sure what a witch could do, or if indeed she was a charlatan. In forcing the Demon out of the child’s body, the witch unintentionally opened O’Connor’s mind and he glimpsed his true past. He also regained a tiny amount of his old Angelic powers, the part that allowed him to detect Dark Magic.

Though annoyed at having lived a lie, he had to accept that he had chosen the life he was now living. Now having opened his mind to the existence of Magic, and remembering the specific reason as to why he had chosen to live as a mortal, O’Connor could finally fulfil his original goal.

Being a pillar of the local community meant he still had to fulfil his priestly duties which he felt were worthwhile but it also meant he had to hide a secret double life. Whilst he still cared for ordinary troubled teenagers, over time they became less “ordinary” until he was solely dealing with magic related problems. Some had latent magical abilities and had become frightened and ran away from home. Others had unique magic related problems that had seen them persecuted.

He eventually ended up looking after children which were the intended victims of two entities, the Witch Hunter and the Templar. The Templar sought out all those touched by Dark Magic and eliminated them before a Demon could use them, whilst the Witch Hunter killed all witches. Both entities though did not care if whether the individual was “good” or “evil”. They seemed only interested in if an individual met a specific criteria.

Whilst adults could probably defend themselves against or at least stand a chance against such beings, O’Connor knew that children and teenagers without a full grasp of their “skills” or magical abilities were easy targets, and needed his protection.

By the time he had become a protected of such children, O’Connor had built himself a network of individuals. Most were at one time his “children” and wanted to help in return whilst others had offered their services based on O’Connor’s reputation.

Unfortunately the Demons had also learned of some of O’Connor’s unusual abilities. Though he was not an actual Angel, he had some of their power and in him denying them of souls they viewed him as working for the Light Realm. Rather than start a war they asked the Gatekeeper to make a judgement by invoking the Rite of Blood. Though the evidence was not strong, the Gatekeeper found in the Demons favour and gave O’Connor the Mark of Blood which would allow any Demon to directly target him without fear of starting a war with the Angels.

A few Demons tried their luck but since the Mark of Blood does not stop the recipient from returning the favour they only managed to seal their own fate by getting vanquished. In attacking him they actually made a mistake for the usage of intense Dark Magic aimed directly at him broke the block on his angelic abilities allowing O’Connor to access all he had as David but for only short durations. Though he could even take on his old form he realised he would not be permitted back into the Realm of Light, but that did not matter as he was at peace with the choices he had made.

As Demonic enemies became more challenging O’Connor found himself increasingly relying on outsiders to help deal with the problems since he could not rely on using his full angelic abilities. This changed when a nun, Sister Wendy McKnabb  arrived at his house. She had been looking for a place to stay after her convent had fallen victim to a Demon. She’d heard of a Priest who fought Demons and asked if he would take pity on her and allow her sanctuary. What she did not tell O’Connor was that she was also leading a double life and fighting Demons. She considered her work as acts of justice for the Sisters she had lost at her convent, and so had become the Sin Breaker. The Demons in turn had asked for a Mark of Blood but the Gatekeeper had denied it. For a start she was a pure mortal and though on occasions he had granted the Mark to mortals in this case  the Demons had instigated the problem by destroying her Convent. Though no Mark was given some Demons chose to act on their own and they had come close to succeeding. Alone she was vulnerable but Wendy felt in the company of Father O’Connor her odds of survival would improve.

It did not take long for O’Connor to discover her duplicity but he was not angry, nor would he stop her. The only thing he wanted was to make sure she did not bring home problems that would risk his “children”. Ironically it was when such problems came home, that Wendy found herself fighting alongside O’Connor.

Just as Demons had decided to risk the truce to eliminate Wendy, O’Connor found himself acquiring an ally in the form of the Angel Bernice. She remembered him as David and too had grow tired of the way Demons cheated their way around the truce. Bernice felt that if they could do it then so could she, although she knew that what she was doing was not without risk for at any time the Archangels could spot her and recall her back to the Light Realm or punish her.

The last permanent member of the Household to arrive was a man, Clark Duffy who had fallen foul of Magic. He had come across a book on incantations and decided to try out a spell resulting in him becoming a huge muscle bound freak. The problem was he could not reverse it. Having consulted others in the way of magic they could not undo it either, so he had gone to O’Connor having heard the priest knew of magic. O’Connor could not break the spell either nor could some of his outside helpers. Duffy was left with accepting his fate. Having been everywhere to try and break the spell, he had been left destitute. O’Connor could not turn him away and so offered him a job as the Church’s handyman.

Because his strength is magic in origin Duffy quickly found he could actually hurt Demons and other mystical creatures that invariable arrived at the  O’Connor house and he became a vital asset to the team. At the time the teenagers O’Connor was looking after likened Duffy to a Superhero and nicknamed him “Giganticus” and the name stuck.

Currently O’Connor has three teenagers under his protection, April Bentley a witch who was being chased by the Witch Hunter, Hinato Ikeda, a werewolf found on the streets and Toby Rogers, a Vampire that the Templar was seeking. In addition to this he has two other “children”, Estiene and Ysabel Fabron.

They are technically living machines but not in the true sense. They were literally unearthed in a cave in France and had been placed their by their mother a witch and their father, a blacksmith. Their village had been affected by a plague and they were worried since it infected the old and young first. Wanting to save her children, she had her husband create a mechanical “vessel” into which she placed their souls which could not be infected. The plan was to preserve their bodies and since “dead” bodies could not been infected, when the plague passed they could be returned to their own. The children lived this way for a month before their father caught the disease and not long after their mother also  became infected. Hoping that one day someone might complete her work, the mother sent her children to sleep  and  created a spell which would awaken them when their artificial bodies saw daylight once again.

Centuries had passed but when a historical record suggested evidence of “mystical mechanical children” it was lucky for them that the person who found it had ties with O’Conner and arranged for them to “live” with him. Since their original bodies are long believed to have lost, they are technically free “souls” that Demons have a vested interest in corrupting in order to claim them.