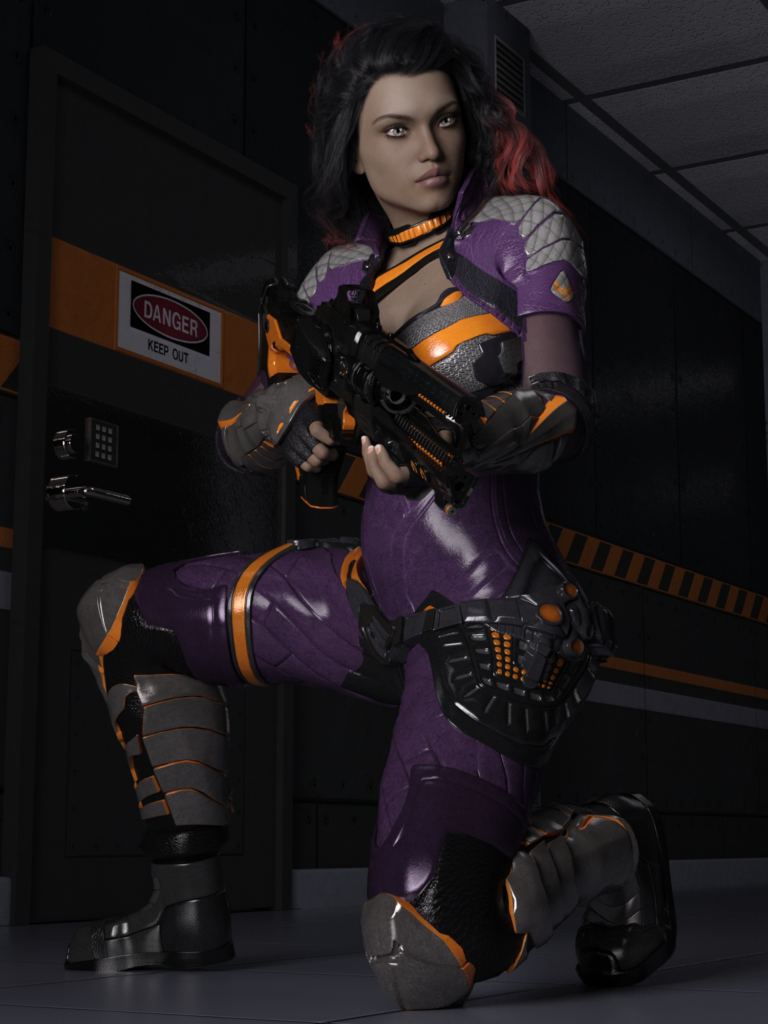 Lizette Bergmann aka Omega is a Raider but not of our world. Here the Raiders were a creation of Janice Langham but where Lizette came from, Raiders were the creation of American and Russian Governments. The actual nanaobots that allowed for the creation of cyborgs were the invention of a Russian Scientist who then defected to America after realising his country intended to use his medical research to create living weapons.

The Russians feared America was going to attack them and so wanted to transform soldiers into cyborgs. Living machines made the perfect soldiers. When the Americans learned the Russians were creating an army of machines they responded by establishing their own program, taking the work from the defector and using it to turn volunteers into Raiders. As with every alternate version of Earth it seemed peace was often only maintained with a balance of power.

The war though never came and the American and Russian Governments decided to officially decommission their cyborgs. Though it was unclear on Lizette’s world what the Russians did, from the American point of view decommissioning meant each Raider having their military training and memories wiped then given new ones and put to work on menial work details in service of the public. A few of the newer Raiders would keep their military training but only used for specific operations.

Since all the American Raiders had been volunteers and had been actual people, the idea of having their memories taken from them was not easy for some to accept. They had served their country and done their service and yet they had been cast aside. A few Raiders chose to accept their fate but the others chose to rebel and go on the run.

Lizette was one of these. As Omega, she belonged to one of the later generations of Raiders and her advancements allowed her to escape having her memory wiped. For a while she and the other escapees were not really troubled by the authorities but then the American Government decided to put an end to that by creating the RRU or Raider Retrieval Unit. This consisted of a mixture of Alpha Superiors and soldiers who came from the last generation of Raiders.

Normally the Units operatives worked in pairs consisting of an Alpha and a Raider and they hunted down Renegade Raiders. Only two were ever needed and after the RRU had several successes Lizette and the other escapees chose to start banding together to survive.

Of all the RRU partnerships, the most notorious and successful pairing was Donovan Lillard, an Alpha with the ability to generate tornadoes and Diana Benson, one of the last Raiders ever “made”. No matter how hard Lizette’s group tried to stay off grid, in the end they would keep getting found and Lillard and Benson would pick some of them off.

When they were down to less than twenty, Lizette and some of the other leaders of her group decided that drastic action needed to be taken. They therefore sought out their world’s version of Rift. He was not exactly a hero and usually “sold” his abilities to the highest bidder. The price he demanded was extortionate but they did not have a choice.

When Lillard and Benson learned of Rift’s payment they assumed the escapees where trying to jump to another Earth. That however was the plan for when the pair tracked the group down Lizette and a few others had Rift open a portal and ran through it. Lillard and Benson chased them, at which point Rift closed the portal behind them thus trapping everyone who had entered on another Earth, our Earth.

Though the small Renegade team were now also trapped it meant the rest of the group were free to more without being bothered by Lillard and Benson. Not knowing if the pair could find someone else here who could send them home, Lizette and the others chose to keep them busy as long as possible by scattering.

Unfortunately for Lizette the pair chose to go after her first and it took her some time to managed to shake them. After three hours of playing cat and mouse, Lizette was able to temporarily lose them and found an apartment complex to take shelter. Knowing at any time her pursuers might find her she tried to hide in a janitors closet and whilst breaking in was seen by Chloe Loring.

Having already ascertained that the world she had fled to was more primitive she expected the woman to scream and was therefore surprised when Chloe offered to help her. Lizette explained she needed a place to hide because she was being hunted. Chloe suggested the police but Lizette knew the RRU could listen in on communication channels so the stranger said that she could hide out in her apartment.

For two days Lizette chose to remain, fearing that as soon as she ventured outside Benson and Lillard would be waiting for her. To increase her survival she decided it was best to tell Chloe as little as possible. One thing that Lizette found curious was the fact that Chloe needed a wheelchair, so Chloe explained about her accident. On the world Lizette came from such injuries were easily fixed.

To this end, one the third night Lizette made her mind that she was going to leave but before going, she decided to return the favour to Chloe and so climbed on her back whilst she slept and inject her with nanobots. Chloe awoke and started to scream so Lizette had no choice but to knock her out.

Now on the run once more, Lizette decided to head south but after several weeks she realised that Benson and Lillard were no longer in pursuit. Though she could never go home she was free at last but now she had to work out what she was going to do. Whilst she had never imagined being inspired by the pair that had made her recent life miserable, one day she saw Lillard on the news. He was dressed completely different and from what she understood her had gone completely native and chosen to use his Alpha abilities to become on of the many heroes she had heard about.

Obviously he had accepted he was not going home and so decided to become productive. Lizette found it strange that Benson was not around and would later find that Lillard’s partner had decided to turn criminal instead.

Having been a soldier, Lizette quite liked the idea of becoming a hero but was not sure where to begin. Fate would have other ideas though when the criminal Blast Zone decided to attack the neighbourhood. Feeling the urge to protect innocent lives Lizette decided to fight back. The general public hailed her as a hero and the rest is history.

Eventually she would cross paths with Lillard, now using the codename F4 but instead of fighting each other they decided that on somebody else’s world it was in everyone’s interest if they called a truce.