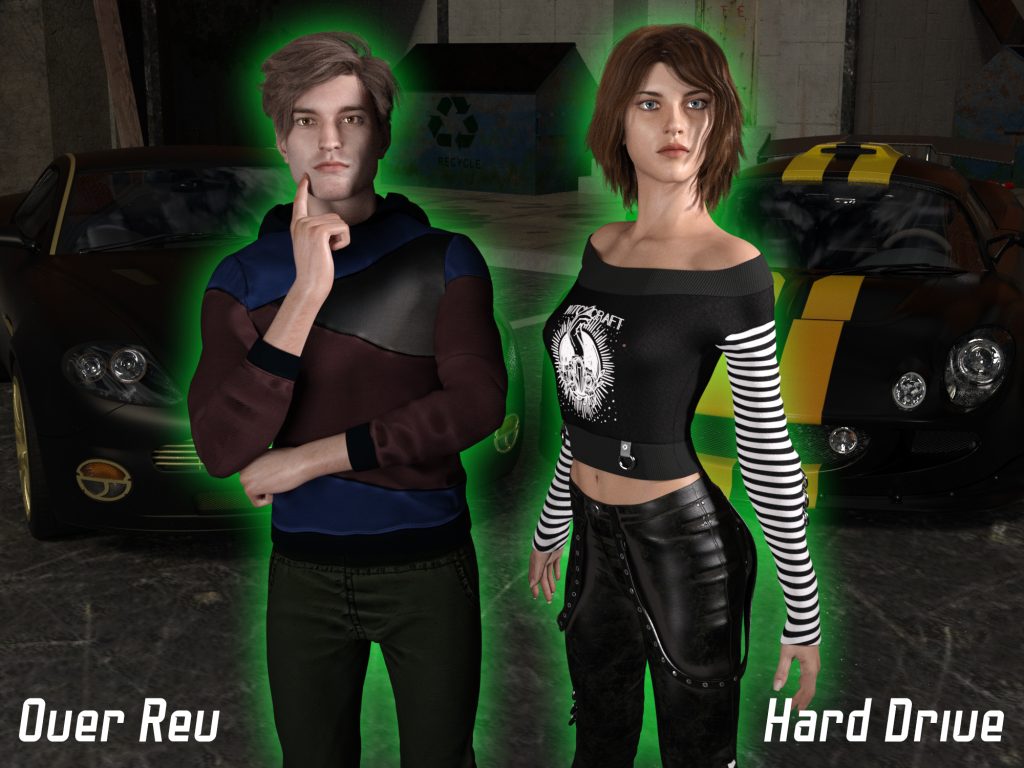 Dermot and his older sister Aiofe McGuigan were victims of being in the wrong place at the wrong time. The pair were backpacking across Europe when they were kidnapped from the roadside by a shadowy science organisation who required a male and female for their experiments that nobody would notice having gone missing. The pair fitted the bill in all respects.

At the time the science group had hired the services of Carnage to obtain certain items they needed for their research. In exchange for their work, the leader of Carnage, Christopher Stewart, did not want payment. Instead he wanted something much more valuable – a means to regain his and his team’s human forms that had been lost ever since they had become bonded to their vehicles.

The science group agreed and after snatching the siblings set about trying to reverse the process that had brought about the creation of the Carnage group in the first place. Since there were two females and two males in the group the science team deemed it logical to experiment on both a male and a female test subject.

The original plan was simply to swap the psyches of the McGuigans with two members of Carnage thus the villains would gain a “human” form albeit they would inhabit someone else’s body. Reversing the process though did not go according to plan and instead the siblings appeared to be obliterated in a bright beam of light when an attempt was made to bond their psyche with a vehicle whilst moving the psyche of Road Rage and Outrun into their bodies.

However what neither Carnage of the science team realised was the siblings were still alive albeit in a non-corporeal form. At first they thought they were dead and from their unusual state they realised they could observe both the scientists and members of Carnage as they tried to figure out what had gone wrong.
Dermot and Aoife came to the conclusion that just like the members of Carnage they had to find a vehicle to merge with and since the head scientists had a nice pair of cars they thought it was fitting to “steal” the vehicles.

Though they had no idea how to attach themselves to the vehicles the process used to destroy their bodies seemed to make the transition easy, perhaps because the source of their transformation, vehicular lifeforms had been used in the experiment.

Once merged with the cars the pair made their escape and over time learned to control their unusual abilities. This eventually led them to discover that unlike every other vehicular lifeform that could exist as a human, albeit a solid hologram for short periods of time, they could return to an actual human form. The downside of this was that their bonding to their vehicles is less symbiotic so whilst the likes of Spectre and Spirit can rebuild their cars from near total destructions Dermot and Aoife can only “fix” minor damage by absorbing power.

For a small period of time the pair ran with the Road Warriors and with them they mastered their special abilities. However being permanent members of the team was not to last. They were siblings and always felt apart from the core group that had worked together for a number of years. The pair decided to part company on good terms and pursue their own path, taking the code names Over Rev (Dermot) and Hard Drive (Aoife). Having worked with the Road Warriors did open doors for them in them in the hero community so in time they work work with the team later on as well as other heroes and vigilantes.