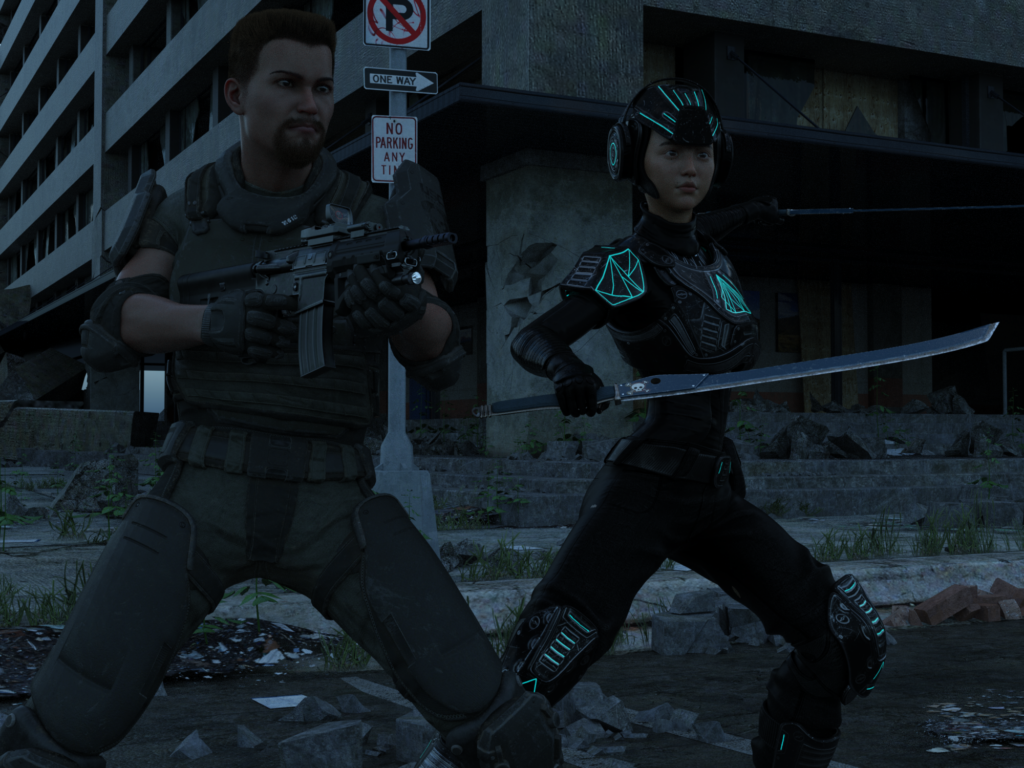 Kurt Schreiber was career military. He was an honourable,by the book soldier and achieved the rank of Major before he lost his entire unit investigating a suspected alien incursion. At the the time he was attached to a European task force, called the Extra Terrestrial Investigation Force or ETIF. This consisted of several units from different countries militaries and were dispatched to investigate possible alien activity and neutralise it if it proved hostile.

His unit was sent out after a radar had picked up possible activity. The military had been aware of alien visitations for many years and in many cases caution was employed as it was viewed best not to start a war with a powerful adversary. However if a unit did encounter hostile activity then they had permission to respond with deadly force.

What the Major and his people found that day was activity from Qex. Her ship was hiding deep in a German forest. She had been forced to relocate her lab after it had come under attack in Australia so when soldiers arrived via helicopter she assumed they would be hostile. Without warning the helicopter gun ships came under fire from Vreen drones and they were brought down very quickly. Before calling in reinforcements and getting them shot down the major decided to take any survivors who were still fit and able and perform a recon mission to find out the level of opposition.

The mission proved to be a mistake for on foot the Vreen drones with advanced weapons made light work of the recon party. The major survived but everyone else was killed, except Yunseo Boobon who the drones took away. Though he hated to leave someone behind, Kurt knew if he did not make it back to the wounded soldier then he would not be able to report what he had seen and that might lead a rescue team into an ambush with the alien forces.

The rescue helicopters came and took Kurt and the wounded. Upon debriefing Kurt told his superiors what he had seen and that they had taken a female soldier hostage. His superiors decided that rather than try and rescue a single soldier they would bomb the entire area.

The air strike proved a success and the alien craft appeared destroyed, but in reality Qex had moved it again. Kurt did not realised this until three years later, when some footage made it to the media of costumed adventurers fighting Vreen drones and in amongst it all was a new weapon, a swordswoman with advanced armour that was fighting for Qex. Kurt was only interested since it involved the same alien that had wiped out his team. However when a “hero” got a lucky shot and knocked the helmet off the swordswoman he had reason to be much more interested for it was Yunseo.

Having never been able to put the past behind him, Kurt had been forced to retire from military service as he was obsessed with going after the Vreen. The doctors said he had PTSD, but he called it guilt. Guilt for getting his men killed and guilt for leaving Yunseo behind. Though he believed her dead, killed in the air strike the news footage had proved otherwise.

He needed to find a way of locating the Vreen and so he took to mercenary work. Being a soldier was the only thing he knew and as he needed cash to travel, being a merc was a natural choice. After numerous missions he  had money but was no closer to finding his alien nemesis. Then he ended up taking part in a high risk job and getting arrested by CLEA.

Imprisoned for his mercenary work he never expected to get out until he was visited by an agent. The man claimed to be from CLEA (but in reality Citadel) said that he had heard of his military past and the encounter with the Vreen and wanted to know everything. Kurt queried whether Qex had been located but the agent would not tell him anything so Kurt remained quiet. In reality Citadel had no idea where the alien was. The deadlock was broken when the “agent” was able to use his contacts to find out the likely whereabouts of the rogue extraterrestrial and stated that “CLEA” had found Qex’s lab. Far from giving the agent information, and highly suspicious as something “smelled off” Kurt decided to make a deal, namely that he would reveal what he knew in return for being given the opportunity to lead a squad of men to investigate.

There followed much negotiation but in the end Kurt was told he could be part of the team but once the mission was over he had to serve a new special military unit. This he accepted.

After being given some of the equipment he requested Kurt was assigned to a team of mercenaries. Though everything went as normal on the final high speed drive to the ships location, Kurt detonated charges to flip all the vehicles. He then fled the area before they recovered.

Kurt found the ship and  as expected he encountered Vreen drones. This time he was better prepared . Whole teams of heroes had failed to make it inside the ship but that was not his goal. He wanted to draw the swords woman out.

Eventually he got his wish and she was both strong and powerful. Against her swords he knew he stood little chance especially as bullets bounced of her armour. Kurt was gambling on the fact that he thought Yunseo had been brainwashed and so at every opportunity he tried speaking to her hoping the reach the real person and not the fascade that Qex had created. For quite some time they fought and eventually he seemed to get through. It was only a brief moment but she seemed to stop, like she was confused. That was all he needed. He closed in fast and  thrust a knockout dart in the area where the helmet met the neck area and the armour was weak. Yunseo fell down.

With so many drones around, Kurt decided it was time to go and threw the unconscious Yunseo over his shoulder and made his escape in the opposite direction to the approaching Spearhead team. By the time they arrived, he was gone.

After quite some time on foot, Kurt found an abandoned shack. Inside it he found rope and tied Yunseo up. As expected when she was awake she was back under Qex’s control but without her armour she presented no threat.

For two days he played mental games with Yunseo, trying to wear the false personality down. A couple of times it came close to tricking him, before finally the real Yunseo had come back. It Kurt had felt guilty about his past mistakes then Yunseo as far worse for she remembered everything she had done in the service of Qex.

Since neither could change the past and both had done things that painted them in a villainous light, the only way to proceed was forwards. As Qex had given her a “weapon” Yunseo felt that she should use that weapon against its creator and any other alien that they came across. Though the man sent from Citadel had intended to recruit Kurt in the first place, ironically though things had not gone to plan he had in fact ended up fulfilling their intentions.

For quite some time they tracked and tried to put a stop to Qex but that proved more frustrating. All this took money so the pair resorted to setting themselves as mercenaries  to pay for their  equipment and information. This was when CLEA had no choice but to consider them criminals.