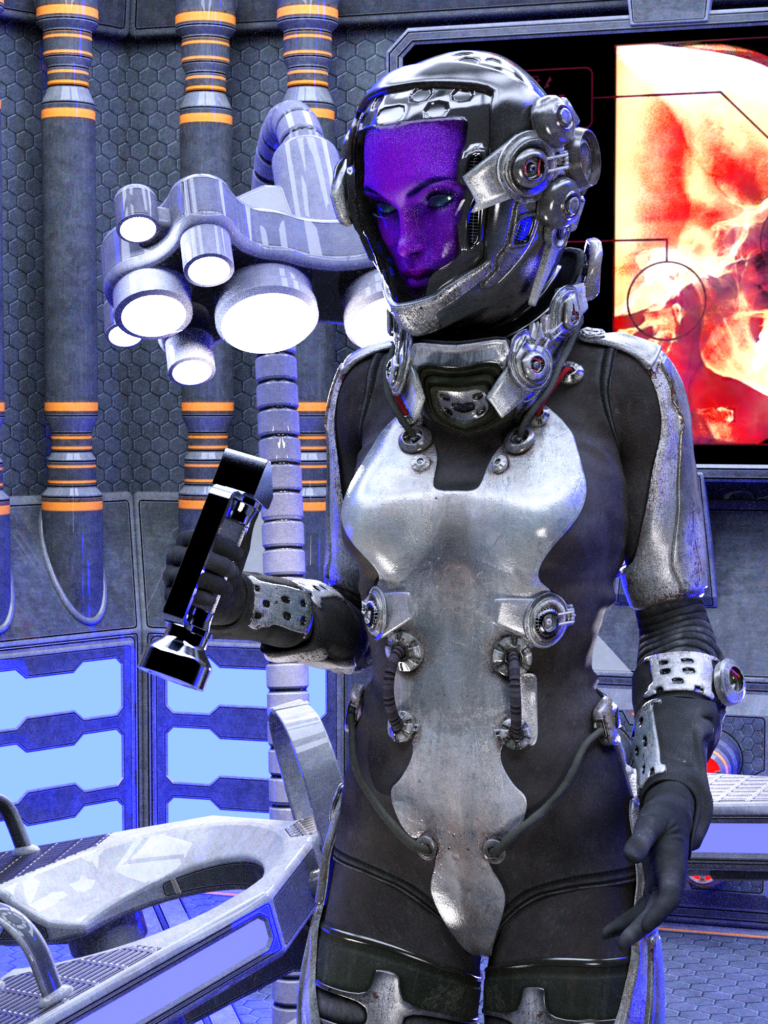 On the Vreen homeworld, Qex was one of the top geneticists. At one time the medical profession was somewhat over looked in favour of weapons and the military. The Vreen had for many years warred with the neighbouring Y’traal but following a victory over their aggressors the Y’Traal decided to spite the Vreen by launching a bioweapon at the homeworld of their enemies.

The weapon acted like a deadly plague and within weeks most people were affected. Scientists did the best to slow down the disease. This was when science and medicine became more important to the Vreen than military might. Successive generations of academics learned how to control the disease and even greatly slow its effects but could not create a cure.

Qex was a lead geneticist and dedicated her life to finding a way of eradicating the Y’Traal disease. After exhausting all options in fixing it with the biology of her own people she thought that the answer might lie with an alien race.

Certainly the Y’Traal were not going to help. Her people had heard rumours about the Eopua developing gene alterations in a race known as humans and were considering a medical expedition. The mission though would be dangerous because the Vreen lived outside Eopua territory and most border races knew that the Eopua had a lack of tolerance for outsiders.

When the medical council asked for a single volunteer to look for a cure amongst humans, Qex accepted despite the risks involved. Curing her people had been her life’s work so the risks did not matter. The idea of sending a lone person would seem crazy to many races, but not to the Vreen. Having been devastated by the plague every life was precious and therefore they were never prepared to risk losing more lives than were necessary.

Not knowing the technology humans possessed but aware of the tech the Eopua used, the Vreen Government supplied her with an advanced space craft built especially for the mission. As well as being fast it could also cloak itself, a precaution that was felt needed to slip past the Eopua border. Inside the vessel there was a bio lab, a medical bay for conducting experiments and a containment area to hold “samples” until needed.

Though the Medical Council could spare a single Vreen, Qex was not alone for accompanying her on the mission was a detachment of worker drones, a type of organic worker that the Vreen had developed originally to perform work duties that were needed to maintain the greatly reduced population. Two types of drone existed, the “simpler” one and a more intelligent military model. Qex was given the latter as a precaution in case humans proved more hostile than they had estimated.

Upon arrival on Earth, Qex set about starting up her experiments. The drones were ideal for snatching “samples” to study. However she soon learned that humans were resourceful and would follow the drones in order to rescue the people she had taken. That meant she had to keep moving her operation, a tactic she started to do after every time her drones had been out “collecting”.

If “normal” humans and their military was an annoyance, when the likes of Alphas and other costumed humans got involved her problems got a lot worse. As she and her drones were unable to breathe Earth’s atmosphere her enemies soon started to take advantage of that.

This forced her into taking radical action and employ the services of humans to protect her operation. As nobody was likely to serve her, Qex was left with snatching people with the skills she needed and then using mind control technology on them. That tech was the means in which she got the drones to perform tasks but Qex had learned to adapt it to human physiology. Though the humans could be made to fight for her, they would not have any advantage over other humans so Qex had to equip them with Vreen protective clothing and/or weapons.

Though she knew it was wrong to enslave people and forcing humans into doing her bidding was the last resort, Qex felt she had little choice. She was desperate for her people and since arriving on Earth had become convinced that humans held the key to a cure. That meant she was not prepared to stop until her work was done.