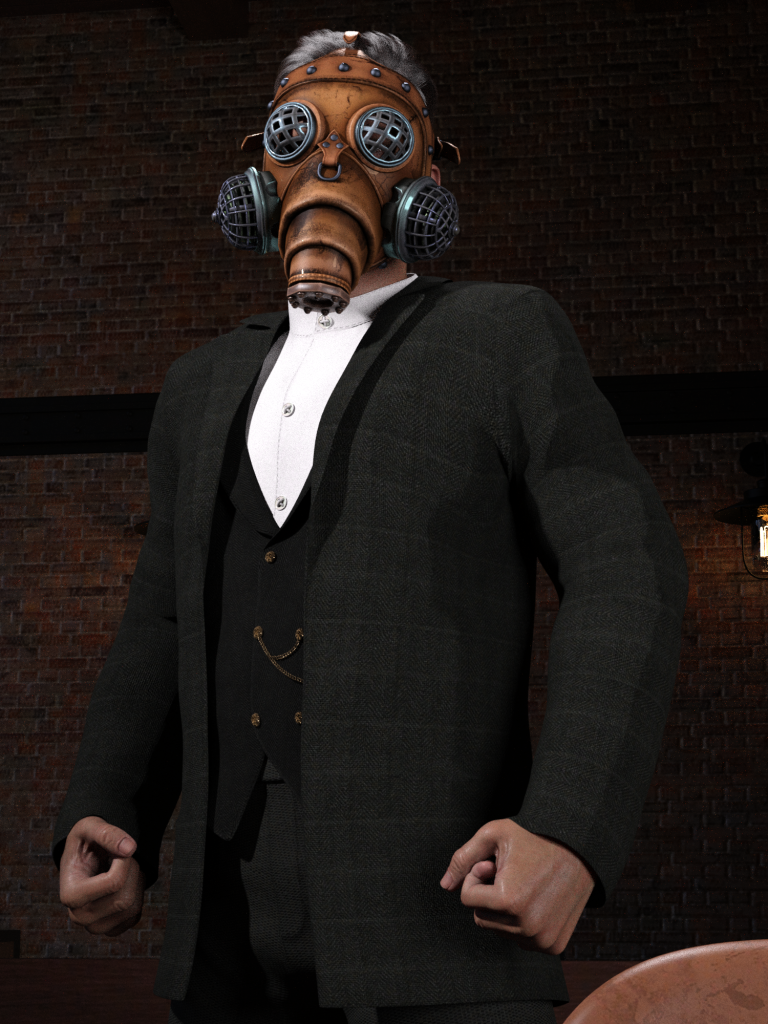 For several years the world knew Arthur McDowell only by his pseudonym, Ragnarok, an extremely dangerous individual known for pulling off armed heists and feared due to a penchant for violence.
His identity was maintained due to the fact he wore an unusual gas mask type helmet that served no functional purpose other than to hide his face and strike fear into those that dared to challenge him. Even his own crew feared the man behind the mask.
After an estimated seventy heists (although more were suspected) Arthur’s reign of violence and crime came to an end in New Tokyo when he and his gang tried to steal a bullion shipment. The NTPD had received a tip off regarding the robbery were waiting to apprehend one of the most notorious criminals of modern history. In typical “Ragnarok” fashion, Arthur refused to go down without a fight and when it appeared he was not going to succeed he chose to take his own life rather than allow himself to be captured. For the first time the world would then know Ragnarok’s real identity
Following the inquest, Arthur’s body and belongings were shipped back to America to his brother Ian. From then on law enforcement agencies assumed they had seen the last of Ragnarok but two years after Arthur’s death there were rumours on the street that a new crime boss had started taking control of the street gangs and was using the same alias.
The new Ragnarok was in fact Ian McDowell. Sources close to him had stated that he had taken his brother’s death badly and the tragedy had warped his mind. Always one to play by the rules and a law-abiding citizen the loss of Arthur actually flipped his moral compass.
Unlike Arthur, Ian was an Alpha Superior and one with the ability to project his consciousness into another person via a “charged” object. Unlike “typical” Alphas with mind control capabilities which directly linked their minds to others his method worked over any distance, where his own mind acted like a transmitter and the charged object worked like the aerial on a receiver, which in turn moved information to the proxy’s brain. Once set up correctly Ian could use the proxy as a remote spy and see and hear everything the other person did, or he could take full control of the proxy or somewhere in between where the proxy retained all their skills but were forced to do what Ian wanted.
He’d kept his ability a secret and never used it but wanting revenge on society he chose now to use those powers to great effect. Making use of Arthur’s old crew he took over a small street gang in Pacifica. A charged object was placed on the gang leader and from then on, the gang leader became a proxy. The process was repeated until he had over fourteen gangs under his control.
Most of the time he allowed them to operate without his supervision so long as they remained loyal to him. On occasion he would use the personal touch to maintain control by “borrowing” a leader’s body. His system worked well and the police were none the wiser to the identity of the new crime boss since the authorities failed to consider him as the new Ragnarok, assuming instead that it was merely a copycat criminal managing the gangs.
The truth would eventually come out and by that time he had become quite powerful in the criminal world. Several police investigations tried to bring him to justice but getting proof proved next to impossible because those trying to get the evidence either “vanished” in mysterious circumstances or unwittingly came into possession of charged objects and were forced into either serving him or getting rid of their own evidence.

Despite this, for a time things became very tricky for him in Pacifica so he fled to Europa and started his “business” there. When the police in Europa got wind of him, he simply returned back to his home city but still maintained control of his gangs in Europa by way of his proxies.

Though he’d largely turned his back on society Ian developed an odd kinship to his own gangs. They were his “children” and he felt the need to protect them. Sometime the threats came from other criminal sources and at other times they came from the law or vigilantes.
The latter he particularly hated and at any given opportunity if he was lucky enough to capture a “hero” a live he would turn them into a proxy and send them to fight their ‘own kind’. By controlling them directly Ian made himself a target but he did not fear his enemies because of his Alpha ability and his means to plan ahead. He largely felt untouchable and even challenged enemies to come after him. This attitude would eventually cause something of a self-sustaining backlash because plenty of villains and heroes accepted the challenge.
The Leveller (Nathan Clarke) was one of the first though to expose a weakness, attacking Ian indirectly by going after his gangs. At the time Nathan was unaware that the gangs were under the control of a mastermind and was simply cleaning out the scum but that victory made Ian realise he could be hurt by having his “children” harmed.
Now aware that he might not be as invulnerable as he thought, noting that if he was distracted by an attack on his gang he himself could be blindsided, Ian decided to create and extra layer of protection in the form of  the Jotnar

With the Jotnar as his loyal guardians Ian then had the means to not only defend himself but also attack his enemies without personally exposing himself. This secured his place in the criminal underworld and has ensured that around the world most law enforcement agencies regard him as a serious threat.

For this reason CLEA was notified of “Ragnarok” due to their ability to chase criminals across borders but has so far not been able to bring the notorious crime boss to justice. Currently his influence is greatest in Pacifica and Europa. For one person to have an impact in the criminal community in two mega cities has made him a threat to Black Shadow and on occasions his “people” have been known to clash with the international syndicate.