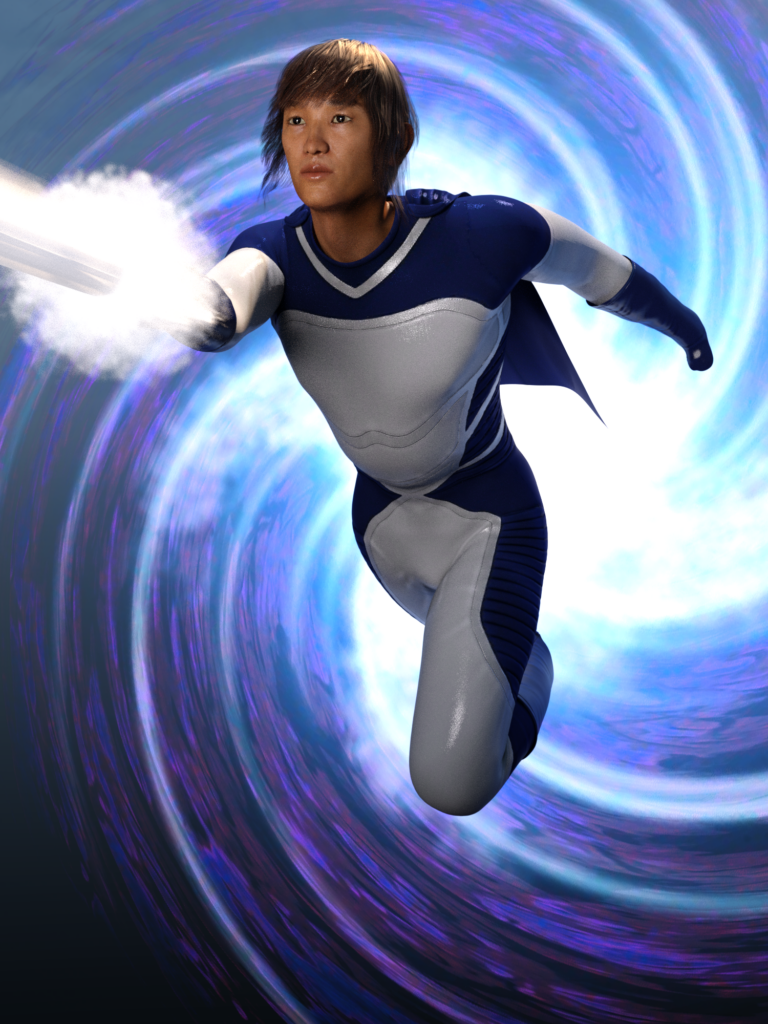 Like many heroes, not much was known about, Bihn, apart from being an office clerk in New Tokya. Then after his  Alpha abilities surfaced people definitely noticed. When he first experienced them, Bihn found himself “popping” through a strange energy barrier. From his perspective he was looking at where he had been only it was like being in a dark room and looking back at the world as if it were window. By pushing back against the “window” he returned to the same place he left.

After some exploration he learned once he passed through the barrier he could move in any direction, like he was “swimming” and then jump back through. This allowed him to exit a ground level and appear at the top of a skyscraper, undreds of miles away. Whilst travelling time would appear to stop and he assumed that the energy barrier was a means to step out of ordinary space-time and then return to it. Alos of interest to him was that in the “null” zone nothing appeared to possess any mass. Knowing what he had was special and important he decided to use his gift to benefit others and became using the name “Rift”.

At first Bihn started small, rescuing people and then he took to more dangerous roles. As he had the means to seemingly teleport he could simply move to a location where trouble was taking place, take down criminals and vanish again. That took longer to perfect since entering and exiting the energy barrier was like trying to push through thick treacle and the delay in passing to and from the null zone exposed him. This changed when he learned he could create a portal to and from the null zone in advance by discharging an energy beam from his hands. However that was not without its own problems for opening a door way allowed anything else to enter it , not just him.

It took him six years to fully master his abilities and then came the day when everything changed and not just for him but the entire world. Reports had come in that a civilian airliner had been damaged by a bomb. Losing altitude is look set to hit near the centre of New Tokyo. Using his Alpha ability, Bihn positioned himself on one of the tallest building and then opened a portal in the line of the flight path of the aircraft. His goal was to sent it into the null zone and once inside he would follow it in. Since it had no mass there, he planned to move the plane to a safe location and release it. The trouble was, he had never opened a portal so large.

Activating his Alpha abilities, he pushed hard to widen the portal. For a few seconds he feared he could not do it but calling on his reserves of strength he managed to complete the task. The plane vanished into the black and he followed it in. However when he entered it himself the place was not there. Frantically he searched the null zone and then caught sight of the aircraft skimming the ground “somewhere”. Chasing after it he existed the blackness and was relieved that it had landed in a field, miles from anywhere. Hero instincts got in and he helped the people from the wreckage.

Bihn was confused as to where the emergency services had go to. He was equally confused as to where he was. All instincts told him he was still in New Tokyo but there was nothing there. Eventually the emergency services arrived to take over. He explained what had happened but though the police and the fire chief acknowledged they knew of Alpha Heroes they had never heard of him or had they ever heard of New Tokyo.

Several months passed and Bihn had been trying to find answers as to why the entire city had vanished. Then he learned from some of the crash survivors that they had gone home only to find their homes were not there or there were other people in their homes or worst still they actually met themselves. It was only now the Bihn figured out what had happened and the full extent of his abilities. The null zone was not a place out of space-time as he thought but a gap between realities and in pushing himself to save the plane he had opened a portal between his and another reality, one in which New Tokyo was never built on reclaimed land.

Afte more experiments, Bihn found a means of breaching back to his home reality and once he perfected it he went looking for the police chief that had been present from the day of the crash. When Bihn explained about his reality theory, the chief actually believed him. Too many of the survivors had reported changes and had caused a great deal of confusion. At first he thought they had all had some sort of mental problem and so had been forced to round them all up in case it was contagious. Then things had got really strange for in examining the wreckage the chief had learned the airline itself did not exist. What Bihn had told him now made perfect sense. Since there was no medical problem, the chief agreed to let the survivors go if Bihn could get them home.

Though everyone made it back home with Bihn’s help they had all lost three months of their lives. Even stranger was the aircraft had vanished altogether and so most families had been forced into accepting their loved ones were dead. Now they were back, that was going to cause a major headache for social services.

Bihn himself was then called for by CLEA, as they wanted to know what he had done. He was not quite sure as to what they were asking until they showed him footage from around the world of some unusual “arrivals” that “appeared” when he had saved the aircraft. With horror, Bihn realised that not only had he breached to another dimension but at the same time he’d managed to open portal to other Earths. Though it had only been brief there had been an influx of visitors from other Earths. They wanted him to send them home but since he did not know where they had come from that was nigh on impossible.

From that day on Bihn was now aware that in pushing his abilities he could bring about untold chaos. Even worse, some of the visitors were powerful entities that found themselves perfectly at home on a new world where their abilities and tech were not as easily defeated. CLEA has since identified about fifty “reality refugees” and they code named the day when they all arrived as “Breach Day”