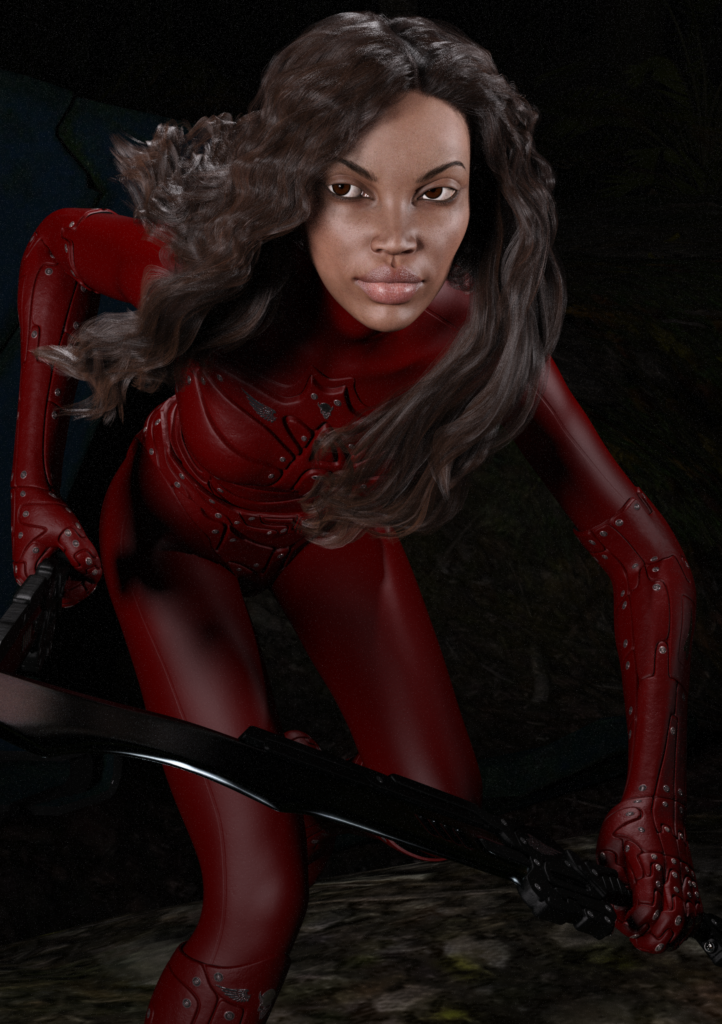 At one time Renata Jiminez was a renowned scientist. After her brother, a marine had died in combat, she had dedicated her life and career to improving the survivability of soldiers in combat. Having learned of several Alpha Superiors who could heal quickly from injuries she felt that would be the goal to aim for.

It took eight years to finally create a prototype drug ready for human trials. The trials though proved problematic for though each of the test subjects could heal themselves quickly they exhibited spikes in adrenalin leading them to uncontrolled rages. This was not her intention but despite this the military were still interested. An angry soldier in their opinion was an advantage.

Being of strong morale standing, Renata could not allow her flawed work to be used. She insisted on perfecting the formula and so was given another year. In that time she could not eradicate the nasty side effects of her drug. Things got worse when the military liaison gave her one month notice that when time ran out his superiors were going to take the formula whether it was flawed or not. She argued with them but since they had paid for her funding they basically could do as they liked.

Time eventually ran out but Renata refused to hand over her work. She had seen the “animals” her formula create in her test subjects and was not willing to let the military transform soldiers into such feral creatures and become victims of military short cuts to creating living weapons. Despite this she was informed that they were taking her work whether she liked it or not.

On the night the military convoy came, Renata took drastic action to prevent the military taking her work. Whilst fellow scientist tried to delay access through the building she started destroying the computers files. All that was left was to get rid of the remaining samples of her formula. She just reached the cold storage are when the soldiers entered her lab. Though she had locked the door, it was no match for weapons. Smashing the vials on the floor would easily allow them to collect parts of samples so as the soldiers prepared to break down the door Renata disposed of the samples they only way she could – she injected them all inside her body.

Already angry at them trying to take her work, the formula increased her rage ten fold and she went on the attack. Despite them shooting at her, because of her formula her body repaired itself so she couldn’t be slowed by their weapons fire. Even worse for the soldiers was that though they had military training nothing could prepare them for her brutal unstoppable physical assault.

Renata escaped capture but it would take time for her to regain control. She was amazed that having injected herself with enough formula to supply an entire squad of men she was still alive. Now she was left with dealing with the aftermath. Much of what had transpired was a blank to her but what little she did remember she knew the military would not abandon getting hold of her. That meant she had to keep running.

Several times they found her but on each occasion her adrenalin spiked and she flew into a rage and managed to fight her way clear. The fact she frightened people played into the hands of the military for they would report sightings of her. Even the best alias would be undone in those situations.

The turning point for her came when soldiers accidentally chased her into down town Pacifica. By coincidence the villain Canon was on a robbing spree. He though Renata was a hero coming to interfere and attacked her. This proved to be a big mistake for she redirected her rage at him and despite his size and power she was able to defeat him before fleeing.

Her actions meant she was hailed as a hero and the military had no choice but to abandon trying to capture her because public opinion was starting to turn against them. Though she would try to stay in hiding, bizarre coincidences kept exposing her and on one occasion she found herself teaming up with the Phoenix Alliance involved with a clash with the Raiders. Following the battle she was still hyped up and turned on her allies but they were able to subdue her.

When she awoke she found herself at their mansion. She apologised for attacking them but the team had already guessed it was not a conscious act. Having attacked them the press were having a field day and so rather than let her have to face that she was invited to stay for a while until things calmed down.

Whilst at the mansion she made full use of the laboratory as she tried to neutralise the formula in her body and return herself to normal. Though the tests all revealed that the overdose in her body had somehow mutated her at the cellular level she did not want to believe it. Gary Wynter even called in some outside help to assist her including the Think Tank but they all reached the same hypothesis. This meant that she would never be “cured” and would have to live with it.

Having discovered that, Renata chose to leave. She feared what might happen if she lost control. Wynter suggested that perhaps she seek the Oracle, Master Yu. The old man had been known to teach warriors and part of that training involved self discipline which he thought might be of use to her.

She did as suggested and working with the Oracle she learned techniques in meditation so that she could keep herself calm. Part of her training involved acceptance and once Yu convinced her to stop fighting what she was then she would have better means to command her aggression and even make it work for her. It took her some time for he to reach that level of inner peace but once she accomplished this it was like a great weight had been taken off her. Now she could learn something new and so Yu taught her how to fight and she quickly picked that up and became quite adept with bladed weapons.

Finally free to move on Yu suggested that though she considered her “gift” a curse it could be of great benefit to others. Renata took that on board and decided to put everything she had learned into practise and become a costumed adventurer.

She took the name “Rocket” since once the “touch paper was lit” she went off like one, which seemed fitting. After several encounters with various villains she became accepted as a bone fide hero and in response to her public duty the Knight’s Forge supplied her with a light body armour outfit. Though she could heal herself quite well villains had realised that and so started using more powerful weapons which meant she needed better protection to avoid being overwhelmed by too many injuries needing to be fixed all at the same time.

Though she has been very good control of her “angry” side there were occasions when she cannot pull herself out of a rage. When that happened the Phoenix Alliance has no choice but to subdue her.