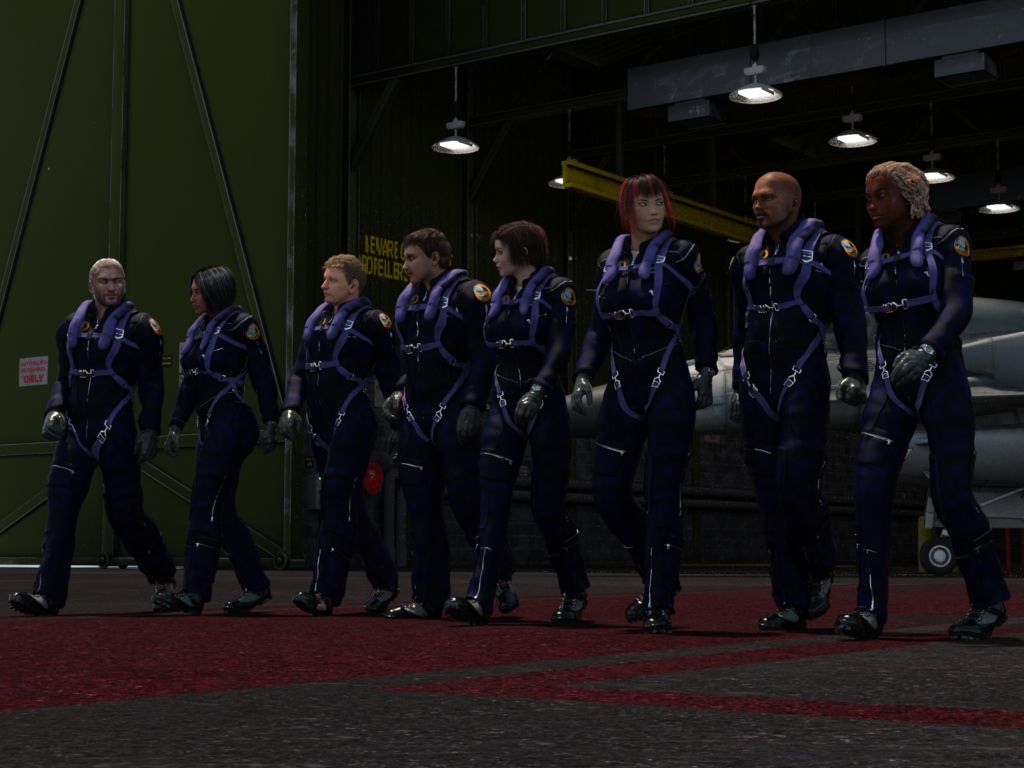 Sable squadron is the criminal version of Arrowhead. Ironically formed when Arrowhead interfered with the operations of some powerful criminal groups.

Sable squadron was the creation of Dr Blacksmith and the Mechaniac. After CLEA had ordered an air strike during an arms deal between the pair, Dr Blacksmith, real name Melissa Henshall, received life changing injuries and wanted revenge on CLEA. Since it was Arrowhead that had performed the mission, they were the focus of her anger.

The CLEA strike teams had long been praised for their ability to take down powerful illegal operations and Dr Blackmith figured that it would be good to even the odds. If CLEA could send in death from above then she theorised it would be good to have something that could challenge the aerial team before they became a problem. Such a creation could also be useful dealing with CLEA’s ground attack teams.

She figured out that creating a means to neutralise CLEA’s heavy assets would be of great value to the criminal community who had lost much to the law enforcement agency poking its nose into their business, and so the idea for what became Sable Squadron formed in her mind.

Establishing an air unit was not something Melissa had ever done before as it was not quite the same as hiring people to work in building her tech. A squadron required extra resources such as fuel and equipment. Luckily the Mechaniac had experience in managing such logistics having formed the drone lords. Whilst it was tricky getting hold of military grade hardware he had friends in countries that did not recognise CLEA or the UN. All that was needed now were the pilots.

Melissa imagined that getting trained military pilots to turn their backs on their country would be difficult and required a serious cash incentive. She also considered that she might have to hire pilots that had fallen foul on the system or were already considered criminals. This would have been very much like Arrowhead, where most of its pilots had been given a second chance after losing their wings due to making mistakes, breaking the rules or being a victim of circumstances. However Melissa did not want the pilots that their own countries did not want. She felt to beat Arrowhead she needed the best of the best.

Getting what she wanted proved easy than she thought, as she soon discovered that around the world there were plenty of pilots, at the top of their game, whom were disgruntled with the organisations they worked for.. Some had been retired early through cutbacks, whilst others had been forced to take on more menial duties due to restructuring. These pilots were the best candidates in her opinion.  All that was needed was to see which ones could be tempted to abandon their loyalty to the services they worked for.

It took time for Melissa to put a team together. She had to be careful to approach prospective candidates without revealing whom she was. If the candidate was too loyal they would no doubt have reported her to the authorities so for her own safety she hired a couple of people to pose as various government agents. They approached the names she had on a list with a “job” offer and if they seemed tempted and passed a number of “tests” then and only then was the truth revealed. When that happened some immediately backed out as they would not accept going rogue and being considered as either traitors or criminals by their own country. They were silenced.

In the end, Melissa recruited eight high level military pilots from various air forces around the world. At first she provided work for them, mainly to give herself protection from CLEA during her arms deals. Then she changed tactics and let her Sable Squadron find its own work. Melissa figured out that when working for her they were limited to perhaps a couple of operations every few months and she really wanted revenge on Arrowhead. By cutting them loose they would keep CLEA very busy in her opinion and with a bit of look eliminate Arrowhead altogether.

Nevaeh and Jordon as the most senior ranking pilots took control. Though they were all now rogue, they kept they military rankings as there had to be a definitive line of command structure. The others recognised the need. Without a structure they would create chaos in the skies and be as much a danger to themselves as the enemy.  Admittedly some would have liked the chance to lead but all knew for them to be successful, military discipline needed to be maintained.

As the Mechaniac and Dr Blacksmith had predicted, there were plenty of people that could make use of the services of a squadron of mercenaries and soon they were making enough money to become self sufficient without any need of handouts from Melissa. In the first few encounters with Arrowhead they also faired better. That was down to the fact that Arrowhead had been surprised by them. The normal aerial mercs they had come across had poor skills but Sable Squadron were better trained and new advanced tactics. Once Arrowhead realised they were dealing with skilled opponents they lifted their game and from then on their engagements were more or less evenly matched.