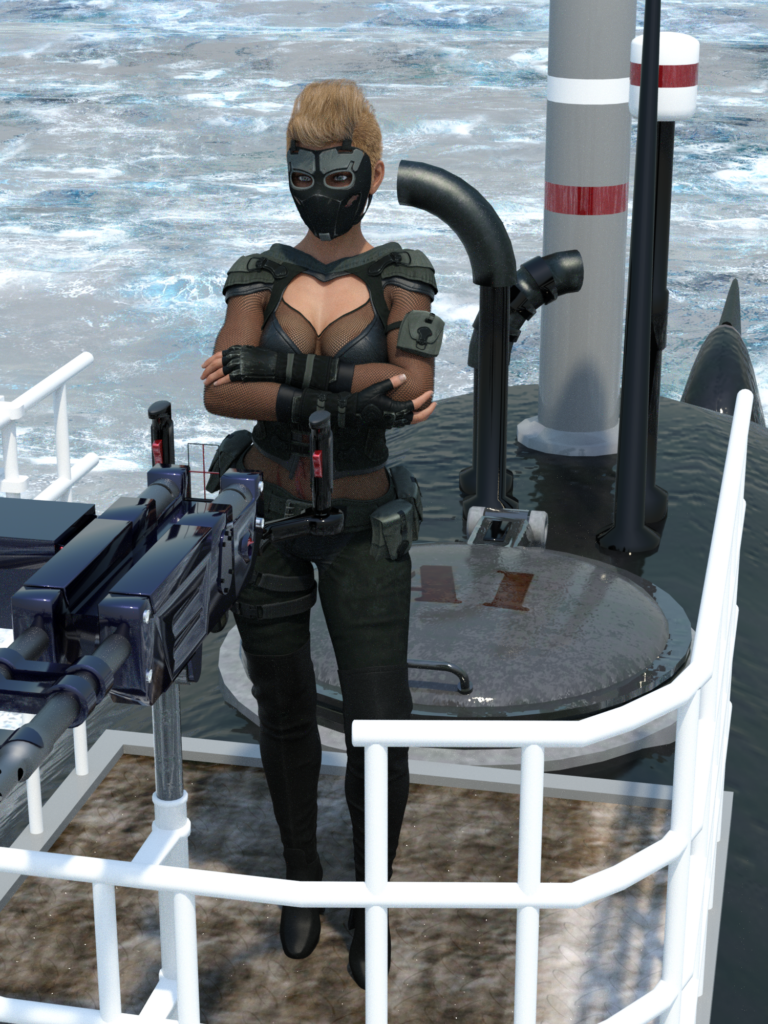 Felicia recruited the best from her spy contacts and successfully stole the submarine. On the way back she became suspicious at the number of “friendly” warships that seemed to be looking for her. Rather than hand over the boat she hid it and returned to HQ. Her commanding officer asked where the “asset” was but when he seemed a bit too keen for answers she refused to tell him. He then made a call and a few moments later, armed troops burst into the room and she was arrested for treason.

Imprisoned for life, she spent two years incarcerated before managing to escape. Felicia then went looking for her old commanding officer. With nothing to lose she threatened to kill him unless he told her everything. It was then she learned he was part of a much bigger conspiracy but before he could divulge any more he fell victim to a sniper’s bullet.

Feeling unable to trust those in charge to give her a fair hearing she decided to remain free. Having won a pardon only to be found guilty of another crime was something of an anti-climax. If the people had done what was asked at the trial no ship would ever have been lost for she would never had to have made any rash decisions. Since the powers that be were not prepared to make exceptions she chose freedom.

Always fearing that they would never open the case, Felicia had made long term survival plans. With a powerful submarine at her disposal and a skilled assault team, she had established contacts with the sort of people that could make use of those services. Turning her back on her country meant as far as she was concerned she did not have one. The sea therefore became her home.

Since she was “the queen of the seas” she renamed herself Salacia after the Consort of Nepturne and started a career in piracy. Generally ships were unsellable since unlike cars which could be stolen and resold with an new identity, that was not easily done with surface craft. The same could not be said for their cargoes. At first she acted opportunistically but eventually took hired jobs of stealing to order. Some criminal groups and businesses even paid her to sink ships on their behalf. As submarine was also very good for smuggling and it was when she used a passage close to Terror Island that she encountered a Species Beta Octopus trapped in fishing nets.