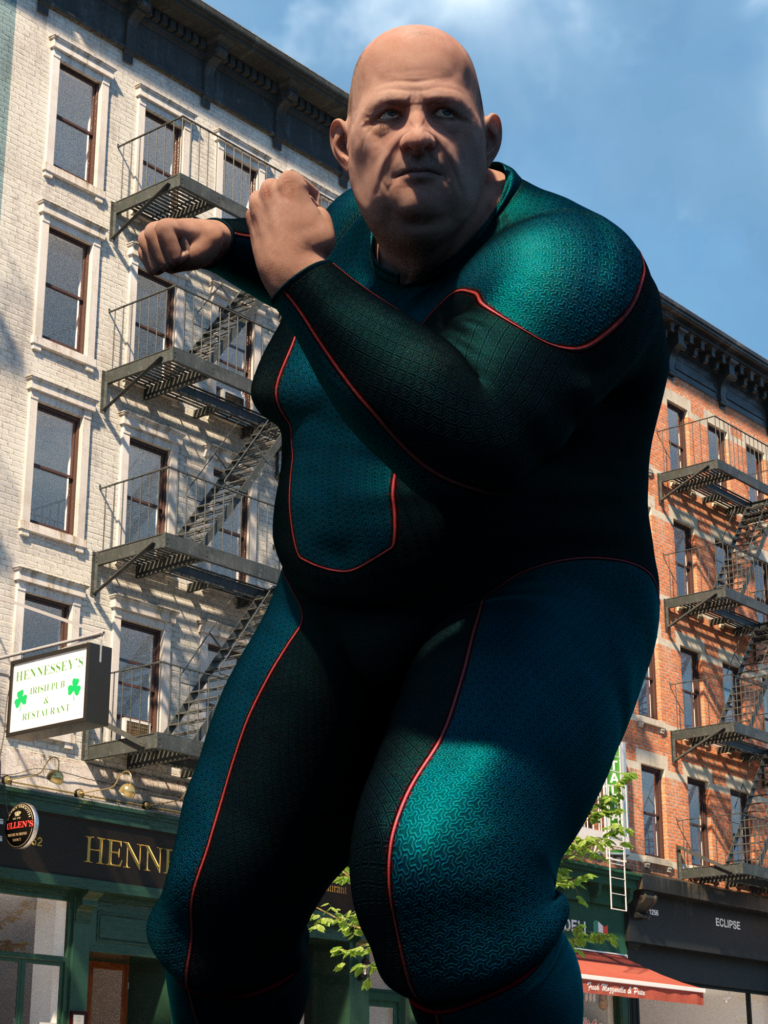 George was one of the few Alpha Heroes that knew from an early age that he was an Alpha Inferior. In fact he had made the transition to Alpha Superior during the first era of Alpha Heroes. Having always been a large man he was deeply self conscious so he never bothered entering the “hero game”. He felt that despite his special abilities he would never be respected. After all “heroes” were all slender or muscular types. Then came the Black Shadow purge and having never made himself noticed, he was able to escape their murderous quest to eliminate all Alphas.

By the time Team Zodiac brought an end to the syndicate’s tyranny, George was in Pacifica and in the last few years he had been a bus driver and after cut backs had chosen to take early retirement. He was quite content with his life and despite the fact a new era of heroes was dawning he did not feel the need to get involved. As well as still being large, he was also a lot older and neither quality were expected by the media. Never one to sit at home and do nothing George kept himself active in his retirement doing various charity work from his local community centre.

Where he lived was not particularly affluent and the centre helped many people. Even the centre was not in the best of shape but repairs cost money and there was not much spare so when time permitted George would do the odd bit of DIY. He was proud of his community role and then the vandals moved in.

At first they just smashed windows and stole items but then the gang responsible threatened upped their game and started harassing volunteers.Whilst at first they had seemed like mindless thugs, George couldn’t help but notice that over time there seemed to be a pattern, a logic to the attacks. He however did not really want to get involved in the trouble is the gang was not bothering him. However one night he was leaving with Cheryl the woman that run the centre and not getting involved no longer became an option.

She was just finishing locking up when some of the gang started walking down the street towards them. As per normal they crowded the pair and pushed them around whilst firing off insults. Normally the best course of action was to ignore them but Cheryl had finally had enough of them. One of the gang took exception at her outburst and slapped her hard across the face. George stepped in. They had gone too far.

The gang did not like him getting involved as thy tried to continue pushing Cheryl around, so he threw one of them to the ground. The gang sort of exploded and George found himself at the opposite end of a knife. The thug tried stabbing him but he activated his Alpha abilities and the knife just disintegrated. As the boy stood their shocked, another gang member pulled out a firearm. George grabbed his forearm and the gun fell apart. Then he screamed as the bones in his arm started to break. Realising that the battle had changed the gang chose to flee. After helping Cheryl home, he asked her not to reveal what she had seen after admitting he was an Alpha Superior.

Though he hoped to put the incident behind him he could not. George, having already worked out that someone was “controlling” the gang, knew until that someone was stopped the attacks on the community centre would stop. Doing some investigating he learned that other businesses in the area were also being targetted. George had tried to get the police to intervene but they were not interested and since people were scared and frightened they would not report the incidents. Therefore George decided to take matters into his own hands and find out who was the mastermind behind the area’s problems by “talking” to the gang.

They were relatively easy to find. Rather than going to them he let them come to him. Though there attacks in the area did have logic they were predictable. After a few failed attempts, George eventually got luck and isolated a gang member. Having seen what George could do from the incident outside the community centre decided to talk, but all he could say was the gang had been contacted anonymously and told to clear everyone out of the area. Before letting the teenager go, George told him that the gang should cease what it was doing or he would stop them.

The warning was not heeded so George found himself going on the offensive, putting the fright on the would be frighteners. Though the gang eventually got the message, they were “replaced” by another gang and the cycle continued. It was not too long before a local journalist got wind of George’s one man crusade and he soon became a local celebrity. By now George had finally learned that the area’s troubles were down to a greedy property developer, My Jack Simpson, who had bought several properties cheap in the area in order to redevelop it but his plans required two blocks to be clear.

As a last ditch attempt the developer, having learned that George was an Alpha Superior decided to bring in some big guns of his own. Alone George had little chance against them but the Alpha Criminals were on the Phoenix Alliance’s radar. They arrived to intervene in the battle and rescued George. Such a public display brought Mr Simpsons’s dealings into full view and he had no choice but to abandon his plans. Though nobody could link him to the troubles the rumours effectively scared off his backers.

Taken back by the Alliance to recover from his battle, he eventually met with G-Wiz (Gary Wynter) who asked him about his “heroics”. George told him that now the area was safe he planned to return to his old life. Wynter though proposed he continue what he was doing and offered to supply him with equipment and health. George questioned the idea, stating that he was not really “poster” material. It was then that Gary said that was the reason why he should continue, to prove that anyone could be a hero, whether they were short, tall, fat or thin. Already he had been seen as an inspiration and Gary thought that was important to continue.

George eventually was persuaded and returned to his are as both a local and public hero. Since then he had kept the people safe, operating under the name “Shatter” and on occasion has the distinction of being able to help out the Phoenix Alliance.