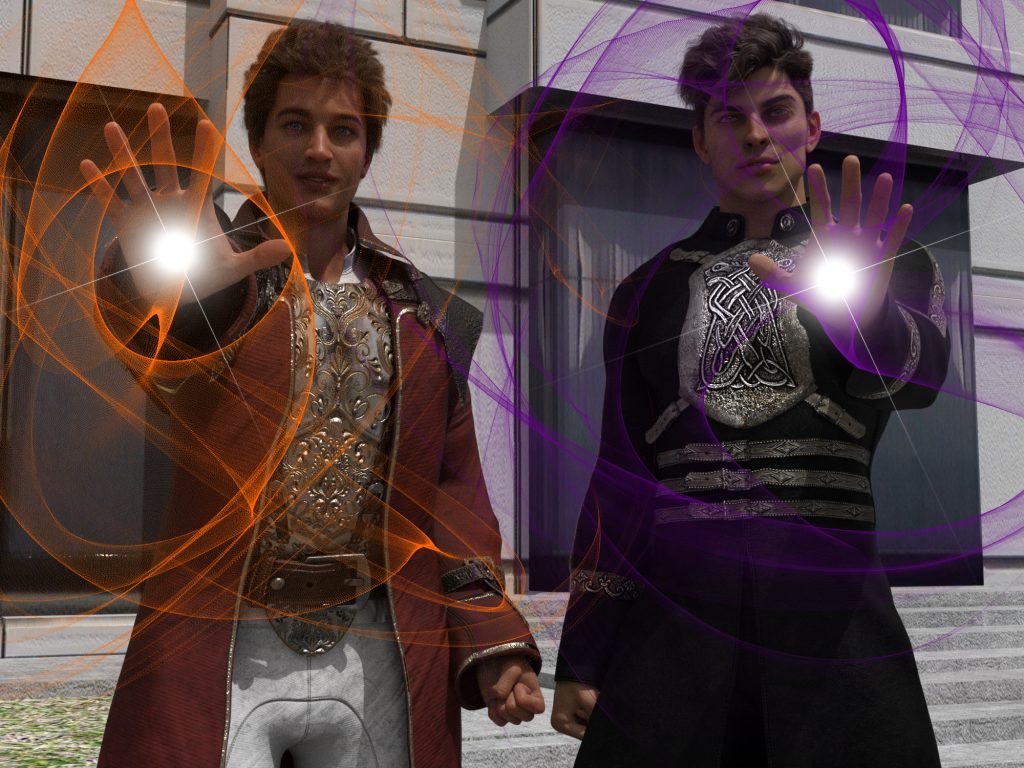 Though at first these two heroes fought against the idea of becoming costumed adventurers once fate had chosen their eventual path they decided to thoroughly embrace the idea. Whilst they are generally known by their codenames they are also referred to as “The Comedians” for they “enjoy” having fun at their target’s expense.

Whilst Oliver Hughes (Substitute) and Nicholas Bailey (Catalyst) both grew up in Europa, they never met until their adult paths crossed. Coincidentally both were aware that they were Alpha Superiors in their teens but neither felt they were hero “material” so kept their special talents a secret.
Nicholas’s Alpha ability allowed him to change any material from one type to another, providing it was not “living” and was also in its “solid” form. The change was usually temporary but the effect could last from anything from a few minutes to a few hours depending on how close the materials were at the molecular level. Thus changing metal to plastic would only last a few minutes at most, changing copper to lead would last significantly longer. One downside of Nicholas’s ability was the more diverse he changed a material or the larger the object the more using his ability manifested itself in a physical toll on his body, draining him of energy. For that reason he found himself comfortable changing small objects, for fun usually in the times before he met Oliver.
By comparison, Oliver’s Alpha ability was a form of memory based teleportation. He could teleport an object from one place to another, swapping there places. Each object has to be of similar mass and size. Whilst he could not teleport something the size of a person he could “substitute” any object with another providing he “knew” the location of both. This often entailed remembering one object and being able to swap it with another he could actually see and he often used his skill when he forgot personal items and swapped something he had on his person with an item he had left elsewhere.

The pair met due to them both being stage actors and they became cast in the same play. Since they were not “big” actors neither lived solely off their income and so did part time jobs to get by. It was during a rehearsal that Oliver arrived back stage and happened across Nicholas fiddling with a coin whilst running over his lines. As Nicholas read the lines to himself Oliver noticed the coin was changing into different metals. Unaware he was being observed Nicholas continued to inadvertently keep changing the coin until Oliver accidentally let out a surprised laugh.
Obviously Nicholas was not happy that his secret was out and asked Oliver to keep it a secret, so Oliver went one better and showed him he was also “special”. Sharing something in common allowed a friendship to quickly develop over the run of the show. They both thought it was odd how fate had seemed to have brought them together and though they knew each other’s secret they chose to never reveal them in public. At least though they had someone who knew exactly what it was like to hide the fact they were Alpha Superior. From that moment in time they tended to find parts in the same plays but whether they wanted to keep the fact they were Alphas a secret, fate would intervene.

The incident which set them on the road as bonafide heroes occurred whilst they had roles in a play called “The Gods of Olympus”. Late one afternoon during a break in rehearsals Oliver remembered he needed to go to the bank to sort out a problem. Nicholas decided to tag along as he wanted a bite to eat. Though the pair were in their outfits they did not really attract much attention at the bank since it was only a few doors down from the theatre and actors still in their outfits was not an unusual sight, in and around the area, even if they were strangely medieval in appearance. It was whilst queuing that two armed robbers burst in. One had a shot gun and the other a pistol and both seemed quite unstable. The pair demanded everyone hit the floor and the customers who were scared out of their wits complied. Oliver looked at Nicholas and the other looked back and they seemed to decide they would not get involved. However when the robber armed with a pistol struck a women cashier who was going frantic and screaming Oliver decided he could no longer stand by. Standing up obviously attracted the attention of both robbers. The one with the pistol approached and went to strike him for not sitting down. However Oliver merely concentrated and remembered his bowl of fruit in the apartment. He pointed at the gun which immediately became a banana much to its owner’s surprise.
Releasing the other armed with a shotgun was also approaching, Oliver thought quickly and pointed at the gun and it became a French stick, the one that he had previously seen sticking out on the customer’s bag of groceries.

Since neither a banana nor French stick were viable weapons the pair quickly turned and fled. It was then that Nicholas decided he was going to use his gift in public for the first time. He followed the fleeing robbers outside and as soon as they go in their getaway car, Nicholas grabbed hold and transformed the aluminium body into lead. The car sunk onto its wheels and immediately became bogged down. By the time they forced open the doors the police had arrived.

Nicholas and Oliver both wanted to sneak away and avoid any further attention but the customers who had been in the bank immediately told the officers about the heroes. CCTV footage of the pair appeared in the papers the next day under the title “Who are these heroes?” and it did not take long for them to be hounded by the press. Oliver and Nicholas had no option but to reveal they were Alphas.

One oddity of going public became a problem for the theatre since the outfits they had been wearing were associated with the “heroes” and not the play. Replacements had to be made and since the theatre had no use for the old outfits, Oliver and Nicholas were given them as a memento of their heroic adventure. Sufficed to say, the play was a sell out. Their old style clothing though has led to some confusion and numerous conspiracy theories whereupon people think that the pair are immortals, truly ironic considering the play they participating in when they obtained their outfits.

Eventually public interest in the pair would wane as other heroes and villains captured the limelight. It was then that they decided to “officially” become heroes for the first time. As the theatre costumes had become ingrained in people’s minds from the CCTV footage, Nicholas and Oliver chose to wear them as their “hero outfits.”

For some time they worked together and eventually became reserve members of the Phoenix Alliance who nicknamed them the comedians.