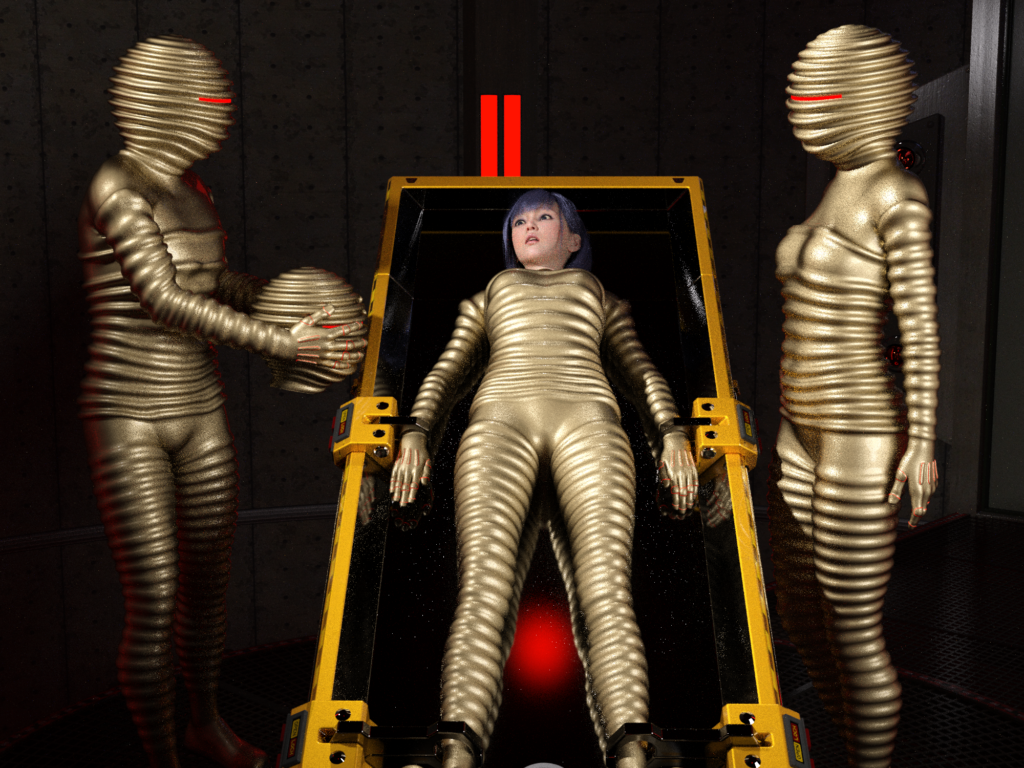 It is believed that the Synthraz was once a simple parasitic life form that alien scientists mutated. Since its base form allowed it to infiltrate most carbon base life and it spread by ejecting spores, scientists thought it would make the ideal carrier for disease and thus the perfect bioweapon.

The mistake the scientists made was to “improve” the parasite by allowing it to access its victim’s brains. The idea was to give if the means to spread a disease into an area of the body where it could not be stopped. However by giving the parasite access to a brain it instead was able to take control over the host. Able to access memories and use the victims nervous system the parasite got smarter.

By the time the tests revealed what was happening the Synthraz had already created spores inside its host. The scientists tried to kill it but it managed to release the spores and infect them. Eventually some spores made it onto a freighter and the Synthraz escaped off world.

As it infected new hosts and took over their bodies it learned more and grew even more intelligent. Using successive hosts its improved itself. By possessing genetic memory, each new generation of spore release became even smarter.

One race tried another approach and tried to reason with an infected host. They simply asked it what it really wanted. Having absorbed so much knowledge the Synthraz reported that if it managed to claim every carbon based life form in the galaxy then it would bring about an end to all wars and conflicts. Taking the free will of its hosts seemed a viable sacrifice.

The story of its overall goal spread quickly amongst advanced races. However after a thousand years the Synthraz still have not been eradicated.

An infection normally occurs when Synthraz spore arrives on a new world. Spores can survive in a dormant state in deep space for  great lengths of time but once in an atmosphere they start to decay and so look for a host to infect. Once a viable host is found the spore quickly invades the body.

The first “infection” aka “Patient 0” who takes on a recently dormant spore will often a coma type condition where they are aware of what is happening but unable to move. When the infection reaches the brain the Synthraz will assume total control over the host.

The host will then start consuming food in so that the Synthraz can start producing the next generation of spores. That takes between one and two weeks depending on the host and conditions. Once the spores are ready the host will find new victims and eject spores out of its mouth creating an airborne release. The original host will then repeat the cycle for the Synthraz does not kill it upon the “birth” of its young.

Secondary infections with active spores are never as pronounced as the primary infection. Instead of disabling a patient they are aware of something happening to their body and can function correctly before the spore takes over the brain.

To prevent the victim trying to get help and ruin the goals of the Synthraz secondary hosts are often “secured” in some way until they fall under the control of the parasite. At first the method of securing a host will often be quite rudimentary, from available objects, but once a beach head is secured the Synthraz will start building specialist equipment for a more efficient operation,

By the same token, once several hosts are taken by the Synthraz, they will start to build protective suits. Though on different planets the source material may differ the suits generally are of the same appearance, the only changes being colour and perhaps shape depending on the host. It is often quoted that the last thing a victim sees before losing control of his or her body is the Synthraz attaching the helmet or headpiece to their body.

It is believed the Synthraz learned to create such clothing items after some of its species were lost when one of its host races learned they could kill the parasite but save the victim by a viral agent.