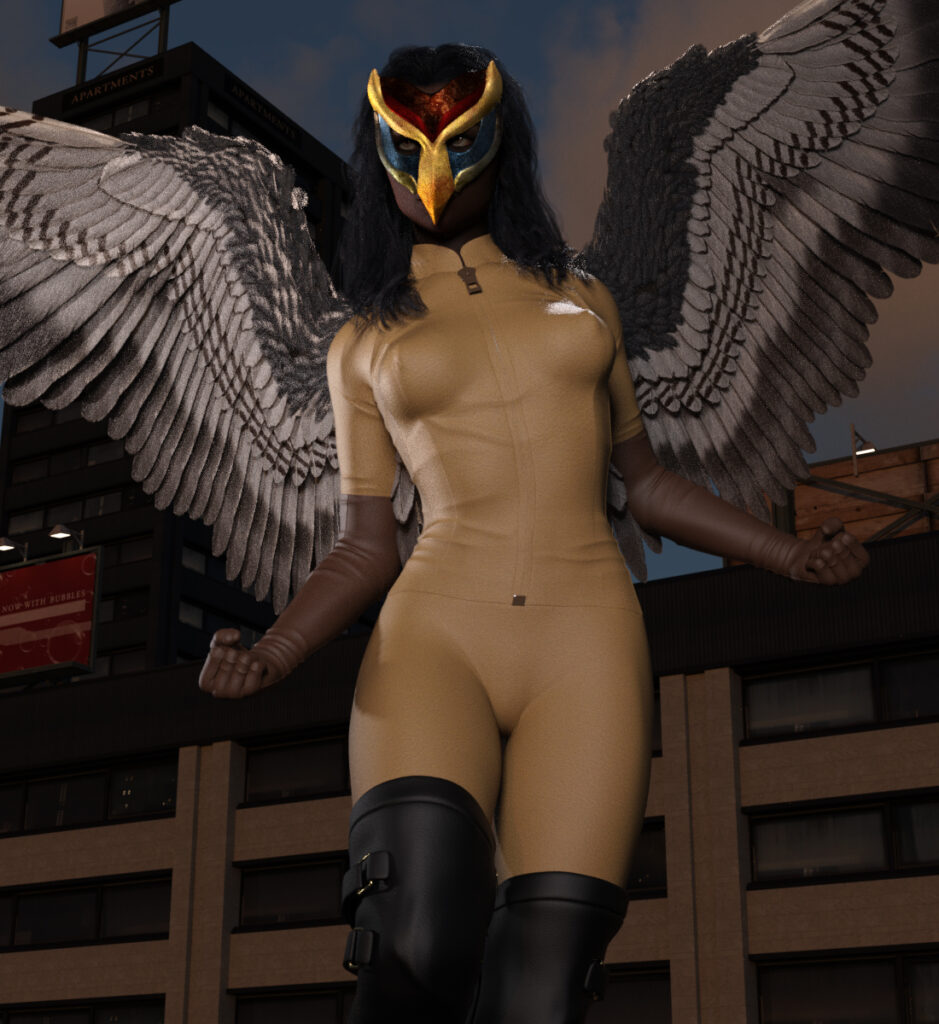 Origin of the Bird Tribe

Tawny Owl belongs to a small tribe of people that collectively call themselves the “People of the Firebird”. Their origin can be traced back to the time of the 1972 comet strike. At the time a group of people that were tending a bird sanctuary in a supposedly safe area well outside the blast radius, the centre of which is where Atlantica stands today. As a precaution the surrounding area had been evacuated anyway but some volunteers decided to take a chance and stay on site to tend to the animals.

When the comet hit and devastated New York dust and bacteria Z was ejected upwards and some of this fell onto the sanctuary whereupon it merged the bird DNA with human DNA turning the sanctuary volunteers into animal hybrids.

In the years that followed the bird hybrids chose to stay together. Now possessing an ability to assume a part human-part bird form they feared that other “humans” would fear them and hurt them. They therefore headed north to Canada and settled in a remote wilderness area. Since they felt drawn to the natural environment they chose to adopt a tribal lifestyle.

As the decades past,the original hybrids ended up having children and they inherited same hybrid capabilities that their parents had. Ruled over by a single family the tribe maintained strict birth control to avoid having too many mouths to feed. People would eventually find them but since the tribe always maintained lookouts, whenever any visitors happened upon them they ensured they wore their human guises. By not remaining completely isolated the bird people were able to forge trade relations with neighbouring villages albeit instead of money they normally bartered for anything the did not have. Other than trade though they rarely had need for the outside world as a whole.

Aisha Lawson belonged to the ruling Lawson family who governed the tribe. To others around her she was like royalty. Like most other children growing up she was shelled from the “outside world” and had very little knowledge over technology and the ways of modern people.

When she turned eighteen she reached the coming of age and earned her “adult” tribal name. Since she had brown mottled wings her father named her “Tawny Owl”. Tradition dictated that adult names were taken from species of birds. From that moment in time she was slowly introduced to some of knowledge regarding outsiders. Her father knew that one day she would assume leadership of the tribe and it was very important for her to know about outsiders and why they were such a danger to their people.

Aisha was also taught in the ways of the tribal warrior. Again if she was to assume leadership then she needed to learn how to be a strong a capable fighter, to deal with any trouble that may come. All throughout her training she could not understand the fear her people had for outsiders. The ones that traded with them seemed non threatening and she wanted to learn more and so she asked if she could take a trip to one of the cities she had been told about.

Her father forbid her and told Aisha that if people from the cities learned of their existence they would follow her back and destroy the tribe. This was why anyone that chose to leave the tribe was banished and never allowed to return.

Less than a year after being told that, her father’s fears of the outside world were almost justified when an area close to the tribe was invaded by heavy machinery which started to clear a great swath. Having now lost their hunting grounds, Aisha’s father decided that the tribe should leave the area. She however did not think that was fair. The tribe had been on that land for centuries.

Under the cover of darkness she visited the site that was being cleared. She spotted the logo on the side of a truck belonging to McCabe Consolidated Industries. Returning home she argued with her father that someone should perhaps visit whomever was in charge and get them to stop. As she had once been told before, Aisha was forbidden to leave. This time however she decided she would act. Even if banished she felt it was a small sacrifice to pay rather than forcing her people to abandon their home.

It took her some time to learn who the owner of MCI (Andrew McCabe) was, and even harder to become acclimatised to the ways of modern people. It literally was a whole new world out there for her. However she eventually found herself in Atlantica but before she could make her move on the owner of MCI she was intercepted by another member of her tribe, “Harrier”.

He had been sent to bring Aisha home “for her own good”. She refused so her attempted to subdue her in order to carry out his mission. The two fought and Aisha managed to best him and then fled before he could give chase and follow her.

Knowing that at any time Harrier could find her, Aisha knew her timetable in meeting McCabe been pushed forwards so the next night she infiltrated his HQ, the White Tower. Already aware that the White Tower served as a base of operations for Team Zodiac, she knew he would be very well protected. What she did not know was Andrew McCabe was an actual member of the team.

Since Team Zodiac had a jet landing pad, she chose a roof entry as the best means to get into the building. Then making her way through the corridors she stealthily engaged various members of Zodiac and incapacitated them. Finally she reached McCabe’s office and broke in only he was already expecting her which surprised Aisha until he explained she had tripped numerous security systems in getting to him.

Though her actions were obviously embarrassing for other members of the team,McCabe had impressed and more importantly she had got his attention. Aisha was surprised when he invited her to sit down. He guessed there was a reason she had been intent on finding him and so asked her what that reason was.

Though she did not know why she felt like Andrew could be trusted and so decided to tell him about her people and that he was damaging their hunting grounds. McCabe seemed genuinely shocked, since he had surveyed the surrounding area and had never seen any evidence of a tribe of people. Though he had planned on starting mining in the area, he promised Aisha that now he knew of her people he would abandon that business venture.

Having succeeded in what she had set out to do, Aisha returned home. Though she knew she might not be welcomed, at least the tribe did not have to move. Upon reaching the tribe her father was overjoyed to see her but upset she had not only ignored his edict but chosen to reveal the existence of their people to an outsider. Aisha argued that the time to remaining isolated was perhaps over and the tribe needed to integrate more with outsiders, that way they could learn from each other.

Her father refused to entertain that idea so Aisha suggested an alternative idea. Knowing she would one day lead her people and it would be her role to make the decisions, she told her father that perhaps she alone could return to the outside world and learn of its wonders and dangers. Her idea was that when it came her time to lead, then she would have the wisdom to help them move away from their fear of outsiders.

Though her father hated the idea of his daughter leaving, again, he knew that when Aisha made up her mind he could not change it. Therefore all he could do was tell her he loved her and to stay safe.

Aisha then returned to Atlantica and met McCabe again to inform him that her people were no longer planning on moving, thanks to him. She also told him that she had chosen to stay in the city to learn more about modern society.

McCabe invited her to stay with Team Zodiac in the White Tower and get them to help her with her learning.As well as seeing the good and bad in human, the more she stayed with the team the more she witnessed their heroics. This inspired her to make use of her warrior training and so she started getting involved. Since the threats from “bad people” would be the same sort of threats her people would face if they integrated with modern society it seemed useful to learn how to neutralise such threats. If she helped people along the way then it did not seem a bad thing.

She would eventually leave the White Tower and get a place of her own, once she figured out the whole idea of money and having to “work” to get it. By then McCabe had equipped her with an outfit for her crime fighting activities, courtesy of the Knights Forge.

Though she would regularly return home to her people and recount stories of her adventures, for a long time she remained confused as to why she never saw Harrier. That answer she got when she happened across him one night in Atlantica and learned that after he had failed to take her home he had chosen to stay. However whilst she had eventually chosen to become a hero, he had become corrupted by the negative aspects of modern society and turned criminal.