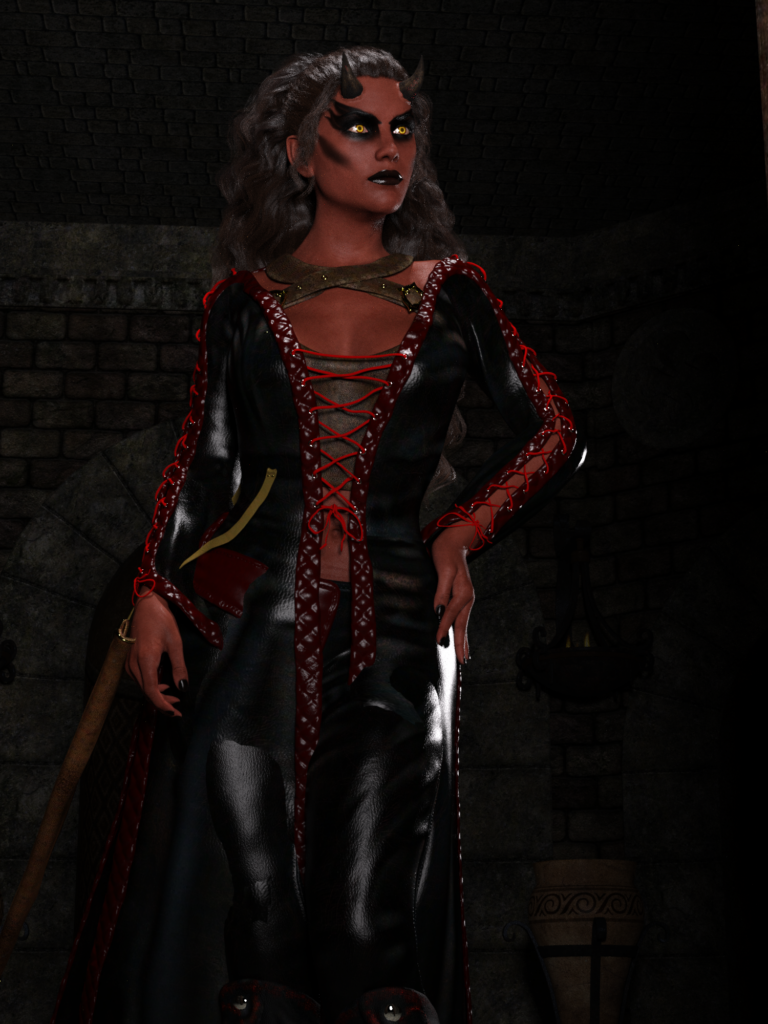 Tazael is one of the younger Demons. For a long time she was stuck at the bottom of the food chain and whilst others made deals with mortal to claim souls and get them to work for her such was the competition that she felt she would make little headway against her more powerful brethren.

Her skills lay in dark magic and after centuries of trying new spells and ideas, Tazael discovered she could actual create magical artefacts which when in possession of a mortal the magic would not only give them power but at the same time make them susceptible to carrying tasks in her name.

Anyone the proxies killed would not necessarily guarantee the souls of the victims came to her. However if the proxy drank her blood then by default that person would become an extension of her, in much the same way as a half demon was able to deliver souls to a demonic parent. Drinking Demon blood also had the benefit of completely eroding the will of an individual. However under normal circumstances demonic blood would kill an individual unless “modified” by a mortal magic user. A proxy with her blood and using her artefacts would be able to collect souls for her. No other Demon had ever done this but Tazael knew if she succeeded she would create the first “Soul Hunter”.

Having mortals claiming souls of other mortals in her name avoided making deals with them all which had the advantage that it reduced the amount of time needed for her presence to be in their realm. Herein lay a problem for Tazael knew that if she visited the mortal realm and simply forced mortals to drink her blood and gave them artefacts she would single-handedly break the truce with the angels.

Though she did not want the bother of making deals with others which is why she had tried to bypass the whole process, Tazael considered that if she made the right deal to the right person then they could do everything else. One deal to one person who would force others to drink her blood and create an army of Soul Hunters seemed a good compromise and did not break the rules between Demons and Angels. All she needed to do was find the right person.

She got her wish with Arthur McLean who was due to be hanged for murder. To save his life, she wanted Arthur to work for him to carry out the tasks she could not without incurring the wrath of the angels and her own kind. Since humans were not immortal she needed to find a way to ensure her contract would last indefinitely. Y’Creft had managed to do that with the Vampire curse that could be passed on and she found a novel way of doing something similar.

To prevent Arthur from noticing her real goal she, like most Demons requested his soul as payment for saving him. As she expected he would not do that so instead she offered to save his life and keep his soul so long as his family line worked for her. Any time someone chose to abandon that then she would claim that generation’s souls.

Arthur, thinking he had negotiated a better deal, accepted the terms, not realising that this was Tazael’s goal all along. Now an ally of his and having chosen through free will, Tazael could teach him the dark magic necessary to create Soul Hunters. In learning that he became the first Blood Abbot.

All he had to do was capture victims and force them to drink the magic infused demon blood. They would then become Soul Hunters. Still human and vulnerable, Tazael’s magic artefacts would give the Soul Hunters the means to protect themselves and the tool needed to carry out their duties.

Very quickly Arthur realised he could not snatch people to become Soul Hunters alone. He needed help and this led the creation of a religious cult, “The Church of Tazael” dedicated to the demoness.

Such a cult gave Tazael access to followers and made her even more powerful. She also made many enemies because her Soul Hunters could effectively steal souls destined for other Demons. When not dealing with them, she had very little need to visit the Mortal Realm except when summoned. This was usually when she needed to give blood for a new Soul Hunter ceremony but on other occasions she has been forced into protecting her Church from attacks by rival Demons who have figured they can get to her by taking down her own infrastructure.