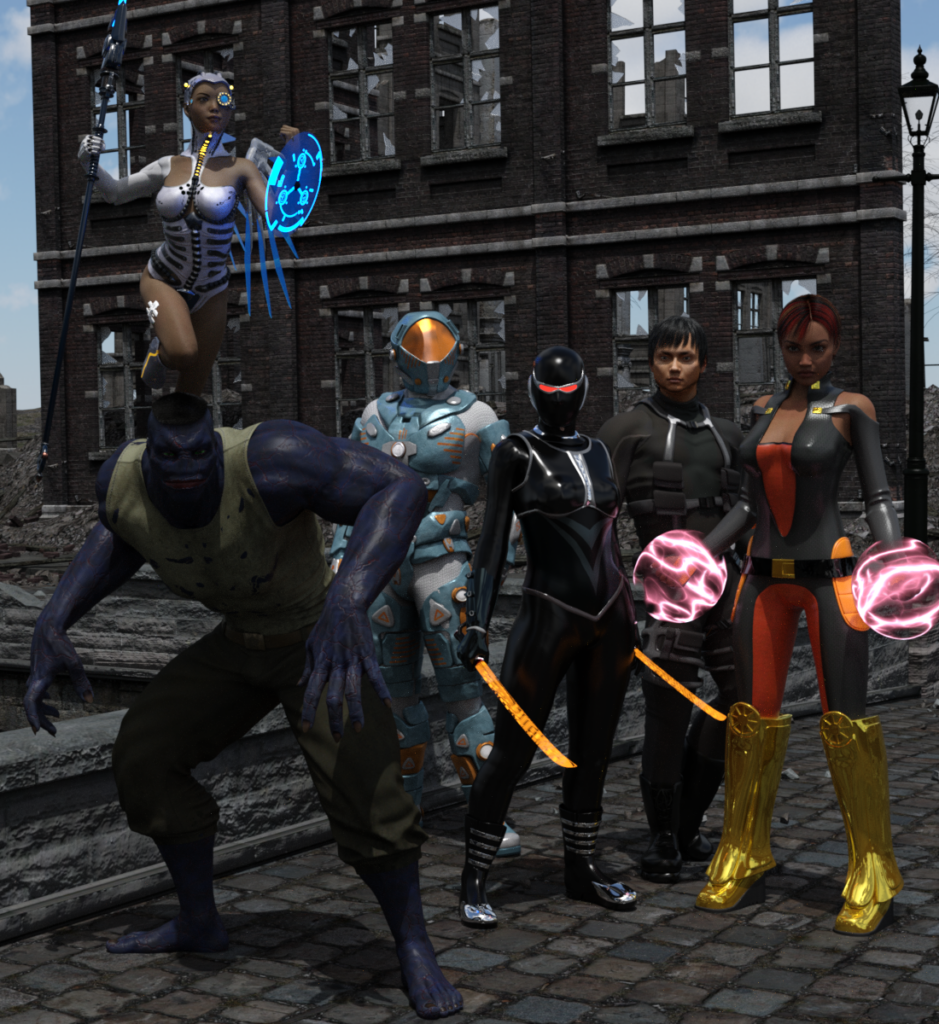 The Jotnar are Ragnarok’s last line of defense, the serve as his bodyguards, lieutenants and enforcers.

At one time the crime boss now known as Ragnarok (not to be confused with his brother who previously used the title) enjoyed the means to control his illicit empire on his own. He had a few loyal lieutenants but did not really trust them and instead used his proxies to run everything for him.  By having gangs control their territories like true gangs but using them to work together to deal with rivals made his organisation very powerful.

For a long time he thought he was invulnerable to the likes of the law and significantly the vigilantes that filled in when the law could not. Nathan Clarke aka the Leveller changed all that. He singly began striking at the gangs in his ongoing campaign to rid the general public of “scumbags”. Clarke had no idea that some other the gangs were working for a higher authority and probably did not care.

However when Clarke “stole” a vital asset, an Alpha Superior who could heal others (*later known as Epione). Ragnarok took note. He had used the girl to “fix” up injured gang members without them needing to go to a hospital. This came in handy when the gangs tried to take over rival territories. Frequently Ragnarok had the girl shipped around like a mobile hospital and kept her prisoner.

With her gone he had lost an important weapon in his arsenal. Clarke had also exposed how vulnerable his empire was so Ragnarok took steps to redress the problem. He decided to find help but this was tricky as he did not want to employ anyone that would challenge his rule but needed them powerful to deal with vigilantes.

The first person he hired was Dusk. He had a long rap sheet for violence but seemed well able to deal with challenges. Ragnarok felt he could do with something else so “arranged” for Dusk to be given bio implants which turned him into a better and stronger fighter.

Paladin was the next. He had got in with Black Shadow and whilst with them had stolen an armoured suit. He thought he could get away with using it for his own criminal empire but found that Black Shadow were determined to kill him for what he had done. With Ragnarok being powerful he had some protection and so came to work for the rival criminal empire. Since Paladin already stole from one crime ring, Ragnarok chose to keep a careful watch on Paladin.

The next person he hired was Ruby Hamilton. She did not have anything out of the ordinary other than being street savvy having run away from home and lived on the streets for years. Ragnarok saw some potential to her but like Dusk felt she lacked an edge. The crime boss therefore made her an offer that he could give her more power than she could imagine in exchange for her loyalty.

She accepted and so he contacted the Broker. The Broker’s “employer” had developed a technique to change ordinary people into Alpha Superiors. Payment was often in the form of materials or resources rather than money. The Broker had originally arranged for Epione to be given her ability to heal others in exchange for rare metals.

This time the Broker wanted a bio sample from an Alpha Superior to add to his collection. Ragnarok could not really give him what he wanted since he did not have any Alpha Criminals working for him. The result was no deal. This frustrated the crime boss greatly so he had his gangs put pressure on people in their territories in a bid to find medical information that would hopefully lead to finding an Alpha Superior (something Black Shadow had done years earlier). Though this practice would continue, since Ragnarok frequently used the services of the Broker and he felt information would be a valuable commodity, in the end he got an Alpha because she came to him.

Some of his gangs in Pacifica had been troubled by a young hero called Mayu Ishikawa aka Chrome Blade.

They believed she was an Alpha Superior, since she could rapidly heal damaged body tissues. Seeing an opportunity, Ragnarok had his gangs set up a trap. Chrome Blade was very much a rookie and prone to making mistakes which along with the arrogance of youth made it a lot easier to capture her. Unlike Clarke who had years of experience and knew when to get out of a situation she did not.

As per the plan she was caught and then Ragnarok handed her over to the Broker. Having fulfilled the request the Broker took Ruby and Mayu to his boss’s secret facility. There the required bio samples were removed from Mayu and Ruby was transformed into the Alpha that would become known as Plasma. Interestingly out of all the people the Broker has transformed she would be the only known one to willingly allow the procedure to be carried out.

Ruby was sent back to carry out her duties for Ragnarok. The Broker though did not have a use for Mayu. He suggested that perhaps she could be brainwashed and returned to Ragnarok to serve with him. Ragnarok though wanted something much more nasty for the troublesome hero. He wanted her left alone.

Back in his “care”, using one of his charged objects, he turned her into a proxy and called her “Scorch Edge”. His plan was to actually break her, for once he released control of her she would remember everything she had been forced to do. Since he could not control his proxies permanently he made sure she was incarcerated when not being used to conduct his business. As an extra precaution to prevent other ‘heroes’ learning she was being forced into his servitude, he had her a special outfit made that covered her entire body.

For a few years the quartet carried out Ragnarok’s bidding with great success. They called themselves the Jotnar. Then came an incident when they crossed paths with the Night Rangers. Despite the latter having greater numbers the battle was fairly even and would eventually go in the Jotnar’s favour when they targeted civilians as a distraction. Significantly during the course of the fight, the cowl worn by Scorch Edge was damaged and for the first time the Night Rangers were able to see the face underneath.

After the battle was over and the dust settled it did not take too long for the Night Ranger’s to learn they had been fighting Chrome Blade. Guessing that she had not switched to the wrong team they concluded she was being controlled as a Proxy. The word was sent out in the hero community and the goal for anyone encountering the Jotnar was to try and capture Scorch Edge.

The Phoenix Alliance eventually succeeded and once the suit was removed from her body and the “charged” item with it, she was released from Ragnarok’s control. This kept the Jotnar at a disadvantage for a while. Ragnarok had felt she was a much needed part of his team and finding a replacement was problematic. Instead he decided to replace like for like and contacted the Broker to see whether it was possible to make a clone. The Broker warned that his boss had never done such an undertaking but for the right payment would attempt the task.

The new Scorch Blade had certain “improvements” made to her and was not an exact copy but close enough to the original to be just as good but without any of the emotional “problems”. The new Scorch Blade was made completely loyal  which meant Ragnarok does not need to control her. The only thing it did not have was as strong an ability to heal itself. The crime boss did not really accept compromises but the Broker explained that normally his employer “converter” non Alpha humans to Alphas.

Ragnarok then had an idea of for that and to bolster the strength of the Jotnar further. He had learned of two people, Dwight Henley and Lisa Armstrong in Europa who were trying to expose him. For years they had been coerced into supplying medical information but the threats had gone too far and they had gone to the police to act as informants.

Normally he would have had them silenced but instead decided to hand them over to the Broker to see if Mayu’s healing ability could be given to them. As per the arrangement, Dwight and Lisa’s memories were purged and their personalities were altered to remove certain inhibitions which would enable them to function a lot better.

The procedure was a success but their faces became disfigured due to an adverse reaction. The pair did not seem to mind this and joined with the Jotnar. Several months later though the healing ability present in their bodies started to restore their memories. They turned on the Jotnar and robbed Ragnarok before being forced to flee.

Later they would surface as the anti-heroes “Last Laugh” and be a constant problem for Ragnarok and the Jotnar as well as numerous  other criminals they cross paths with. Ragnarok would never make the same mistake again but the Jotnar would increase in number.

The first new member came in the  form of Fire Flight, a Raider that had come from an alternate Earth following the rift incident. Highly advanced but lacking a purpose in her new world she was easily persuaded to work for Ragnarok.

Shortly after that the Jotnar ended up rescuing the Species Beta hybrid being chased by the law. They thought if the law was so interested in him then he might be of use to the group. Ragnarok was not pleased at his subordinates making their own choices and nearly had “Hunger” killed. Certainly in his human guise he was hardly an asset. However when he transformed into the creature that had an insatiable appetite, Ragnarok considered that Hunger could be the ideal way to track a target via sensory means. All he had to do was make sure the creature did not turn on the team due to its primal urges.