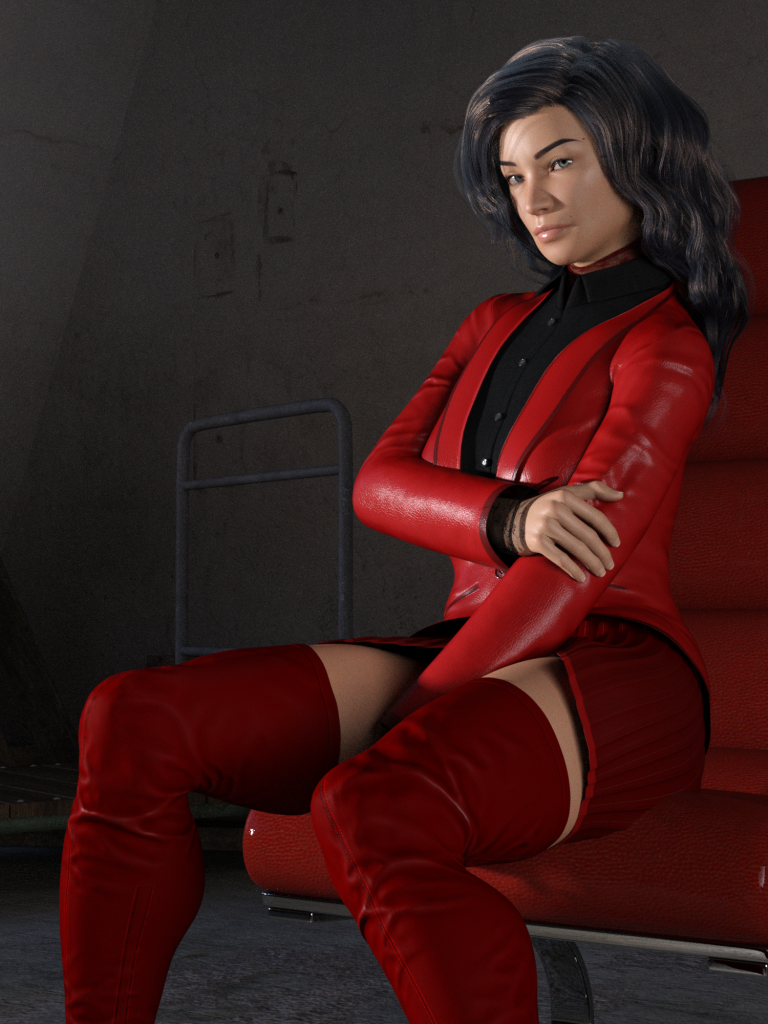 Brought up in a family where her father, Robert, physically abused his wife, Lorraine, and daughter when drunk, Rebecca became acclimatised to violence at an early age. After suffering as a victim for a number of years when she was fourteen and her father returned home drunk one night she knew what to expect only this time something inside her snapped. Instead of allowing him to beat her and her mother she stood up to him and taking one of his bottles struck it over his head and then buried the smashed glass neck in his chest.

Thinking she had killed him she fled the home. Her father survived but after returning home from hospital kicked her out the house. Ironically Rebecca did not see this as a problem but instead viewed it as a release. Having become used to violence living on the street was not that hard for her and eventually she joined the Thompson Street Gang one of the many street gangs in Atlantica.
Months past and she rose up the ranks. Like most gang members she used an alias rather than her real name and she chose “Lady” as she felt the name reflected her importance. Being able to compete physically with males in the gang helped in her gaining power for she would on occasions beat them down if they tried to force her to do something she did not.
The only person she would obey was the gang leader and in time her reputation meant others started to fear her. Having discovered a taste for power it was not long before she challenged for leadership. In the fight to decide who got to lead she defeated her opponent in what amounted to a bloody physical confrontation.

After assuming command, she began to re-organise the gang into her image. Her father had made her wary of men in general so she promoted girls to prominent positions and the boys that hated that had the option of leaving.

Sometime after she had gained control, her mother tracked Rebecca down. Having finally stood up to her husband she had walked out and once settled into a new apartment had come to reunite with her daughter. Using a private investigator Rebecca was tracked down but when the pair met for the first time in two years all Lorraine could see was Robert’s seed of violence that had been sown in Rebecca’s mind. Despite this Lorraine tried to persuade her daughter to come home with her but Rebecca refused, for she had come to enjoy the power she had gained. This would be was the last time Rebecca had any contact with her mother.

In time Rebecca craved more power and so began taking on even more rival gangs and claiming their territory. With the escalation in numbers there came an escalation in crimes. Eventually Rebecca soon came to realise that the Thompson Street Gang was becoming too big and cumbersome to control on her own so she placed girls she trusted in charge of any new “acquisitions”.
Eventually she decided to change the name of her network of gangs and simply referred to them as Atlantica Streetz and by this time everyone in the criminal underworld knew of the “Lady”.

As well as serving as overall leader for the street gangs she had under her control she branched into fencing off the goods they stole. By putting pressure on some of the major fences in Atlantica and forcing them to work for her, Rebecca had the means to get rid of the items her gang stole from their victims in a highly efficient and profitable manner. Once Atlantica Streetz gained notoriety she then had her gang go into the protection racket business and finally to further add to her wealth in recent years she has used her crime network to distribute counterfeit goods and supply drugs.

Always suspicious of outsiders in general, Rebecca has learned to trust very few people. However two girls have been with her since the beginning. They remained loyal to her throughout her drive for power it was these two she decided were the only ones she would trust her life to.