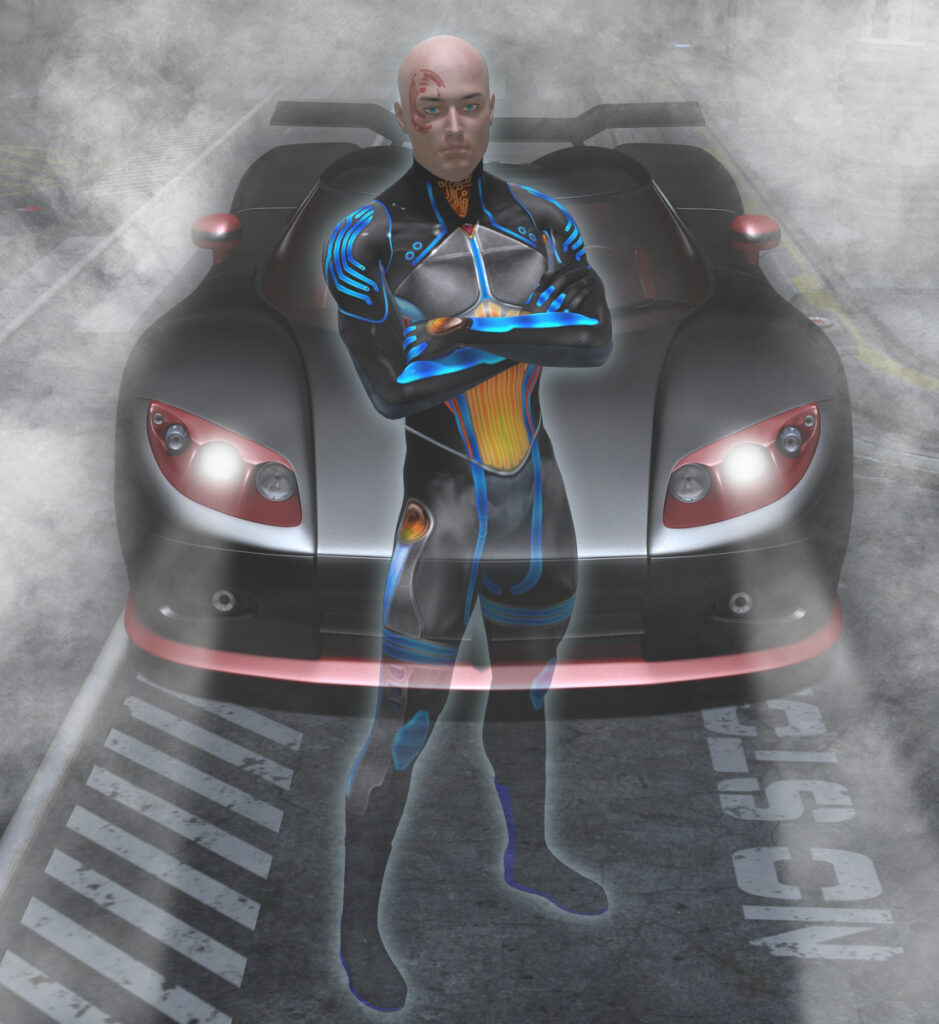 Vehicular life forms is the term given to a mode of transport which houses the psyche of a human host. The original host loses their organic body when merging with the vehicle thus becoming one with the machine. Most vehicular lifeforms can “project” their original human guise in a form similar to a hologram.

Unlike a hologram though the actual projection can vary in density from being almost ghost like to a solid form. The fact the solid form emits light prevents a vehicular life form being mistaken from a normal human along with the limitation they cannot stray to far from the vehicle they are bonded to. The more solid the appearance the greater the power needs, so frequently to do this feat a vehicular life form has to be close to an external source of electricity which can be absorbed into the host vehicle. Though most vehicles do have a source of electricity the power drain is often tremendous and would drain a battery in seconds. A wraith like appearance though is sustainable  with  most vehicle’s internal electrics. Lastly a vehicular life form  does not need to project a human form resulting in the curious  sight of a vehicle driving itself.

Electricity can also be used by vehicular life forms for another unique ability they  have in common – the means to repair themselves. Just as the human body can repair itself , a human merged with a vehicle has a similar means to heal “wounds” although unlike the human body, a vehicular life form can often repair a lot quicker.   Minor damage to  the host vehicle can often be “fixed” without too much effort but serious damages  required linking to an external source of electricity. In some cases vehicular life forms have been seen to repair themselves from total wrecks. This self repair “ability” though will not work if the life form is “projecting” a human form outside of the vehicle  but will work if the projection is inside the vehicle.

All vehicular lifeforms can be traced back to one source, the  White Guardian that was once known as Technomerge, real name Simon Gray. He had the means to merge with any technology and whilst on a case was show and killed by corrupt police officers. As he died, in a desperate bid to hang onto life he merged with his car. That did not prevent his human body dying and forever trapped his psyche inside the car.

Simon Gray, technically dead became known as Spectre and using his unique abilities decided to turn vigilante, joining up with ex police officer, Jenny “Mackie” McClare. The pair in turn later joined the Road Warriors and that would see them come into conflict with the Renaissance Mob.

In a bid to get rid of the their foes, the Renaissance Mob tried “killing” Spectre with an EM cannon. The pulse though hit his car as well as Mackie travelling inside. The effect of this was the pulse took Spectre’s baseline pattern and merged it with part of Mackie, creating a second entity consisting of both Grey and McClare’s psyche. Since the second entity was in “competition” for resources with Spectre, the Road Warriors took a highly risky action and attempted to move it to another vehicle. The transfer was a success and the new entity took on a female form and became “Spirit”. Since she had both the psyche of Gray and McClare, Spirit was regarded as their child. Of all the vehicular life forms she is the only one that was created from two human psyches.

After the unexpected creation of Spirit, the Renaissance Mob having  produced a new enemy would actually attempt to duplicate the process to give themselves their own  vehicular life form warriors.  After capturing Spirit they fired an EM pulse at her through a beam splitter into the bodies of four mercenaries who then merged with vehicles. This created “Carnage”.

Though Carnage would prove to be tricky enemies for the Road Warriors, Ron Brooks, the leader of the Renaissance Mob had lied to the mercenaries he had hired and told them they could return to their own bodies at any  time. When Carnage realised this was not possible they turned on their creator.

In time Carnage would seek help from a rogue science team in a bid to return to human bodies. An experiment was tried on two captured siblings and resulted in failure, in that it only separated their psyche from their organic forms but did not allow the psyche of another to inhabit their bodies. The pair were left to exist as almost ghost like entities but eventually realised they could merge with vehicles and this Over Rev and Hard Drive were born.