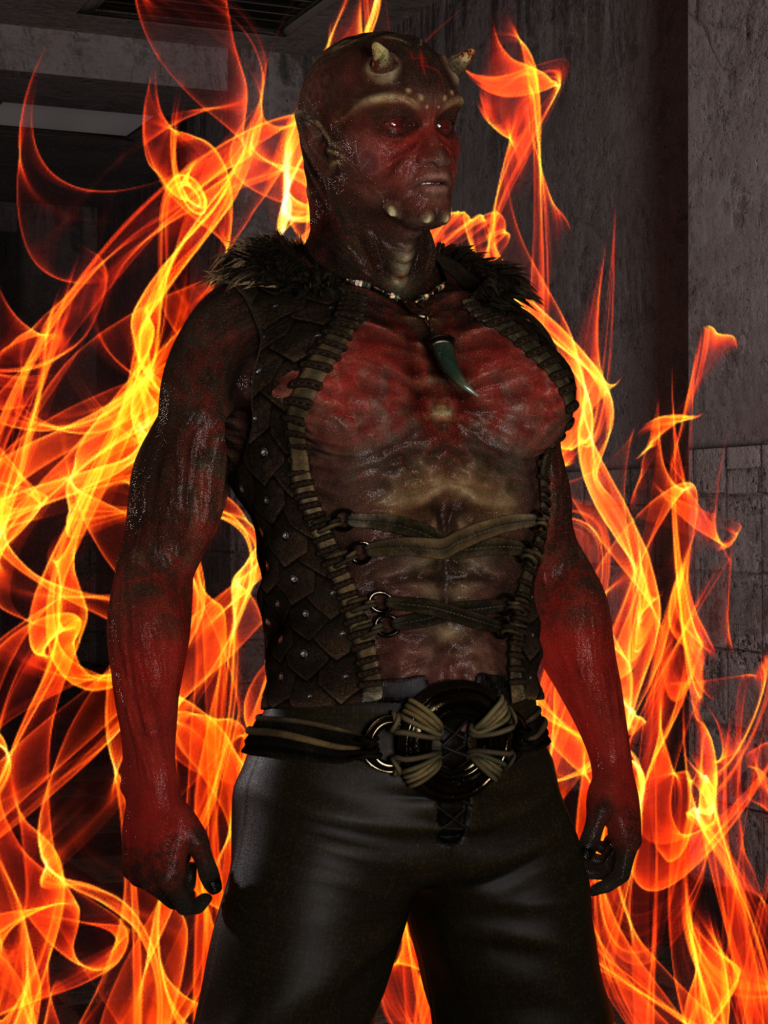 Y’Creft, also sometimes known as the great deceiver was once a very low ranking Demon. He saw little chance in rising up the ranks until he used his charm and intelligence to produce the  best Demonic contract of all time. Realising he needed souls to attain power and he was attuned to blood magic, in the 15th Century he decided to visit the mortal realm and risk the wrath of the Angels.

There he found a young woman Genovefa Wolfhart who was ripe for his purpose. She had lost her family when a warlord attacked her village. The strength of her negative thoughts acted like a beacon and drew himself to her. Feeling her need for revenge he drew up a contract which stated that in return for her soul her would turn her into a powerful creature that would be virtually unstoppable. Such a creature would have the means to infect others and become the same, thus enabling her to build an army.

He admitted that those affected would fall under the same bindings as her contract. Though she did want revenge she was not foolish to sign her soul over. This was unexpected so Y’Creft decided to try and sweeten the deal by putting clauses in place that would mean if she followed the rules she would keep her soul. However he intended to make sure that the magic he used would make certain that would be an impossibility.

She accepted his modified contract and became subjected to the following clauses.

The last stipulation was a clever part of Y’Creft’s contract. He knew that Angels would not tolerate innocent lives falling victim to his contract if they were unaware of what they were doing, so he made sure that if a human was bit they would be subjected to excruciating pain. This could be relieved by pledging themselves to the contract or survive the suffering for a day. The pain ensured most would pledge themselves and as such they had entered into the demonic contract willingly thus circumventing any problems with the Angels.

When creating the curse Y’Creft also had to find a way to make sure that a person would break the clause and thus forfeit his or her soul. Simply killing in anger, could actually be avoided so Y’Creft made sure the magic gave all Vampires an incredible blood lust and a hunting instinct. This he hoped would make them lose control and kill in anger and consume the blood of a victim.  To further increase his chances he made sure that vampires aged far slower than normal people and were stronger and healed faster. The last thing Y’Creft wanted was a vampire being killed before they had forfeited their soul.

Aware that the biggest threat to spreading the curse would come from users of White Magic, Y’Creft made certain to neutralise that problem by having vampires experience benefits from consuming the blood of such individuals. Such blood  would restore youth be restored and at the same time  strength and vigour would be increased. Essentially the blood of White Magic users would act like a drug to vampires.

Having established his curse, Y’Creft began to reap the benefits. Every time Genovefa turned another victim they became linked to him. He thus gained “Followers” which boosted his power and that started his rise up the ranks of Demons. Annoyingly Genovefa avoided his real goal of claiming her soul for quite some time. Others were not quite so lucky and gave into their urges and killed in anger.

Having souls that belonged to him boosted his demonic powers and within a few centuries he had climbed almost to the highest ranks. Though he had abided by their rules, many other Demons were not happy with how Y’Creft had gained his power. They were also concerned that the actions of vampires were technically accountable to the Dark Realm and as such could ignite a war between them and the Angels. This is why other Demons such as Kinen have visited the mortal realm and work against Y’Creft as a means to keep the agreement in tact.

Though Y’Creft had an almost unlimited supply of followers and Demons he could not foresee that in modern times Vampires would fall victim to human technology and become hunted. To prevent themselves being killed they organised themselves and learned to “farm” humans or obtain blood without hunting. This meant that they avoided handing over their souls to him. Though a source of annoyance they still act as his followers which is how he still holds his position of power.

Equally annoying to Y’Creft is the fact some vampires have actually forced his contract to work for them. Bethany was one of the first to do this by summoning him to protect her from a rival. If the other Demon killed her he would lose a potential soul which meant Y’Creft had to eliminate one of his brethren to prevent her escaping the clause.