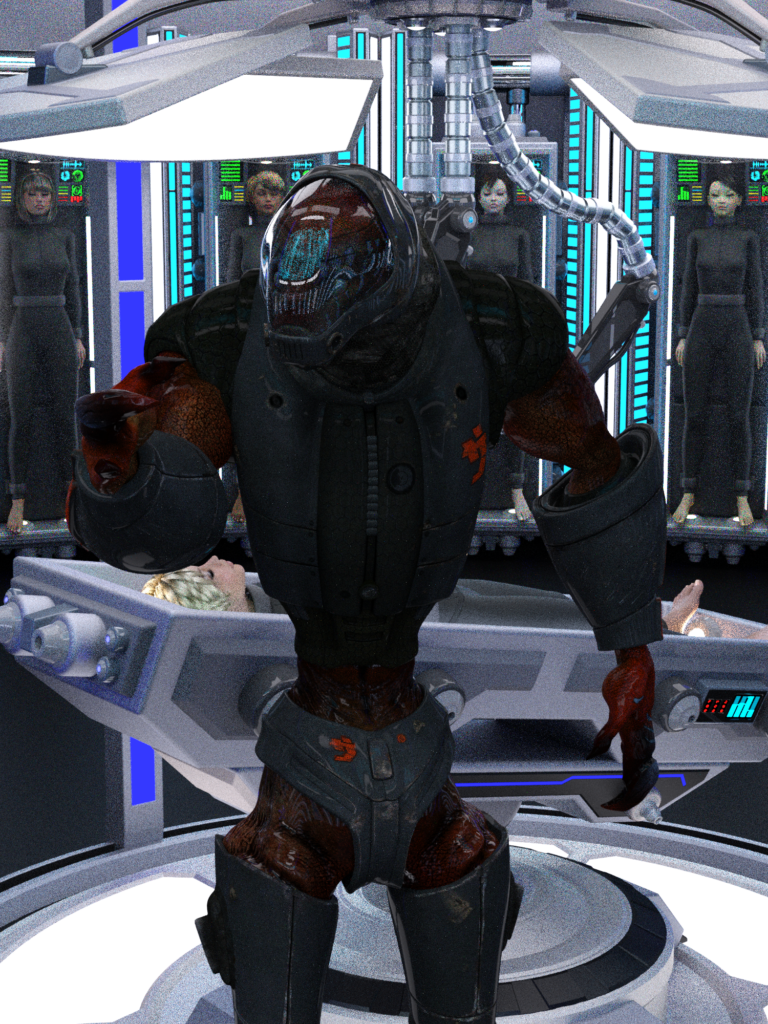 Zorn was a member of the Wruaq’Eps race who were protected by the Eopua. Recognised for their bioengineering skills, after the first experiment to seed super human capabilities on the people of Earth failed, (the original comet strike in China) the Wrua’Eps race were chosen to modify the Bacteria Z formula. The second attempt succeeded, partly to the fact the comet impacted more than one area and the Bacteria Z was more virulent and effected more people.

One of the members of the team that created the new strain of Bacteria Z was Zorn.   The Eopua had never made it a secret that they were dying out and humans were to replace them as protectors. Although the Eopua never envisaged it would be less than another millennia, Zorn became convinced the Eopua were in fact lying. Nobody could persuade him otherwise. He’d looked at bioscans of a small group of Eopua and concluded the evolutionary decay was not a thousand but a hundred years or less.

Knowing his own people were scientists and not soldiers he feared what might happen if the humans were not ready in time to take their place when the Eopua died. Going against the views of his own science team, his own government’s law and the Eopua edict, he travelled to Earth with the intention of speeding up the seeding process. The ultimate goal was for him to find a foolproof way to genetically modify any human and transform them into Alphas regardless of race, or sex. He had the data on Bacteria Z but that was not enough because the compound was supposed to work slowly as an evolutionary process and did not always seem to work on every human.

Sneaking past the Eopua patrols was tricky. For a while he orbited in his stealth ship in order to learn more about humans. In only a short space of time he quickly surmised that his presence might not well received. Since many civilians feared Alpha Superior humans, an offer of giving them all abilities would not work. He also felt that governments and thus the military could not be trusted either because they had their own agendas and not one of them was for the goals of all humans.

This was a problem. To speed up the seeding process he needed human subjects so upon landing his ship he managed to snatch a couple of humans. He did not care who they were as he simply needed some source material. The pair a male and female became his first victims, genetically re-engineered and transformed into creatures that could be used to hunt for people with specific attributes. From these he was able to clone more.

CLEA would eventually name the female “Banshee” and the male “Snare”. Banshee had the means to levitate and could emit a sound that could stun humans whilst Snare had the means to remove the victim and transport it back to Zorn’s lab using a form of teleportation. Having created a template, Zorn was able to create several of each and would go onto replace them when they were “lost”.

Having solved the problem of collecting test subjects, obtaining some of the rare elements needed to create bio-compounds was not so easy. Many rare and valuable minerals of the sort he needed were controlled by governments and militaries, the same people he had chosen not to work with. Progress would have stopped altogether had he not noticed the resourcefulness of human criminals which seemed to be able to get hold of anything. Zorn did not really understand the concept of “criminals” since such primitive motives had been long gone in the Wruaq’Eps. What he had learned quickly is that criminals desired power and would do anything to get it. Zorn felt if he could offer a taste of power then they would give him the elements and any other material he needed.

Before working with criminals he knew there were other things he needed to set up first. Ideally he needed some actual Alphas to study. By studying them, he hypothesised that the data collected would be key in turning any human into an Alpha Superior. Snare and Banshee were lucky in finding some Alphas, albeit inferiors but snatching lots of people in the hopes of finding an Alpha was a pure trial and error process and one which Zorn knew would get noticed over time.  With some test subjects Zorn set to work. Simply trying to manipulate Bacteria Z again to give transform a human into an Alpha Superior did not work.

That was not really a disappointment for him as he never believed it would work but he had to try in order to rule the data out of his experiments. Eventually he did find the key he as after when an Alpha Superior, a criminal known as Barrage crossed paths with a Banshee. From Barrage he took a small sample and implanted it in another male who was not an Alpha and then added some genetic manipulation. The process worked albeit it was  far from perfect for the test subject died.

Keeping Barrage prisoner he did several more experiments, each one improving. Directly cloning Alpha Superiors had poor results but cloning genetic material and transferring to a non-Alpha host seemed to work better. One thing Zorn did learn was that the people he used as hosts in his experiments proved somewhat hostile afterwards. To this end he started to develop a procedure to remove all memories leaving them as a blank slate. With only Barrage at first to supply genetic material, all of Zorn’s early creations ended up with variations of his ability. That was limiting in his overall plan.

Now with some success Zorn decided to move to the next level. For this he needed specific elements and minerals. It was finally time to start working with human criminals. Not wanting them to find his lair and thinking they would not work with an alien, Zorn created an artificial human that would become known as the Broker.

Unlike Banshee and Snare which were more rudimentary and acted like animals, the Broker behaved almost exactly like a human. He created more than one and linked them telepathically. One would remain in the facility whilst the other would make deals. Should the “active” Broker get in trouble, then as a security measure it would ignite itself and turn to dust. As the point of death the active Broker would transmit what it knew to the next Broker waiting at the facility. This was how they seemed to be the same person and remember the same experiences but could self destruct leaving no trace.

It took many attempts before anyone would deal with the Broker which greatly frustrated Zorn but eventually he acquired customers which allowed him to obtain some of the rare elements he needed to get his lab fully operational. At first he offered them tech and the worthless mineral humans called gold but soon some of his customers wanted power.

The only way he could give them power was by giving them Alpha Superiors who could protect their criminal enterprises. He did as asked and gave his customers what they wanted but as they all were similar to Barrage, he knew in time they would find that limiting. Zorn also found that limiting as he did not have a broad spectrum of data. The experiments continued though and he perfected the technique of purging the memories of his creations and developed the conditioning process. That gave him a “product” that could be made loyal to the buyer.

Criminal types often appreciated the final product but remained unaware that Zorn had his own agenda. He wanted to turn the entire human race into Alpha Superiors which would mean his customers would eventually have no advantage as the playing field would be levelled if he succeeded. Zorn knew it was in his own best interest to keep that information to himself.

Whilst working for the criminals, Zorn knew his own progress was at a virtual standstill. He needed more than just Barrage to amass a wider spectrum of data. Since Banshee and Snare could not find Alpha Superiors directly he hit upon the idea of having the Broker demand buyers supply him with an Alpha Superior or obtain medical records to locate others through genetic traits. Despite the difficulty in the payment many of the buyers were able to get some of what was required. In the case of an actual Alpha Superior being used as payment the victim would first be incapacitated and then either a Snare or Banshee would transport it back to the  lab.

After a sample was obtained from an Alpha Superior he no longer needed them since he could clone the material and use it. Imprisoning the person he took a sample from was illogical to Zorn since it did not help achieve turning the entire human race into Alpha Superiors so he would often let them go, but not before he wiped all memories of what he had done to them. In certain cases he “reprogrammed” the Alpha Superior and sent it back to the buyer is they so asked.

Whilst Zorn kept a “stock” of ordinary humans to convert to Alpha Superiors, on some occasions a buyer who wanted an Alpha Superior would supply their own host. Most were unwilling volunteers since few wanted to risk their lives if things went wrong but there were instances of willing volunteers working for criminals that wanted the procedure done. In either case mental safeguards were programmed into their brains to ensure loyalty.

The longer his work went on, the more Zorn feared reprisals, especially when he realised that in a few cases the memories of his victims had returned. To this end he decided to build himself a few bodyguards. Currently he is known to have two, Barrage and Mortar. In the case of the former Barrage is a new construct. Though he wears the outfit of the original it is believed the early experiments led to his death but was not ‘replaced’ instantly.

Other bodyguards to Zorn are believed to have included Union and Piledriver. CLEA suspects that Union started to remember who he was and rebelled so Piledriver was sent to prevent him from exposing Zorn. She eventually recalled some of her past memories resulting in Zorn losing both, thus he created Mortar and then added a new Barrage to strengthen his defences.

After his enemies proved to be resilient Zorn decided to add an extra level of defence and started creating genetically modified creatures, called ZATO soldiers by CLEA. They are vicious predators and will kill anything they come across. Such creatures can be released if Zorn needs to move his base, that way heroes have to waste their time neutralising the monsters.So dangerous are these creatures that they have to be given a control collar by Zorn to keep them under control whilst in his base.