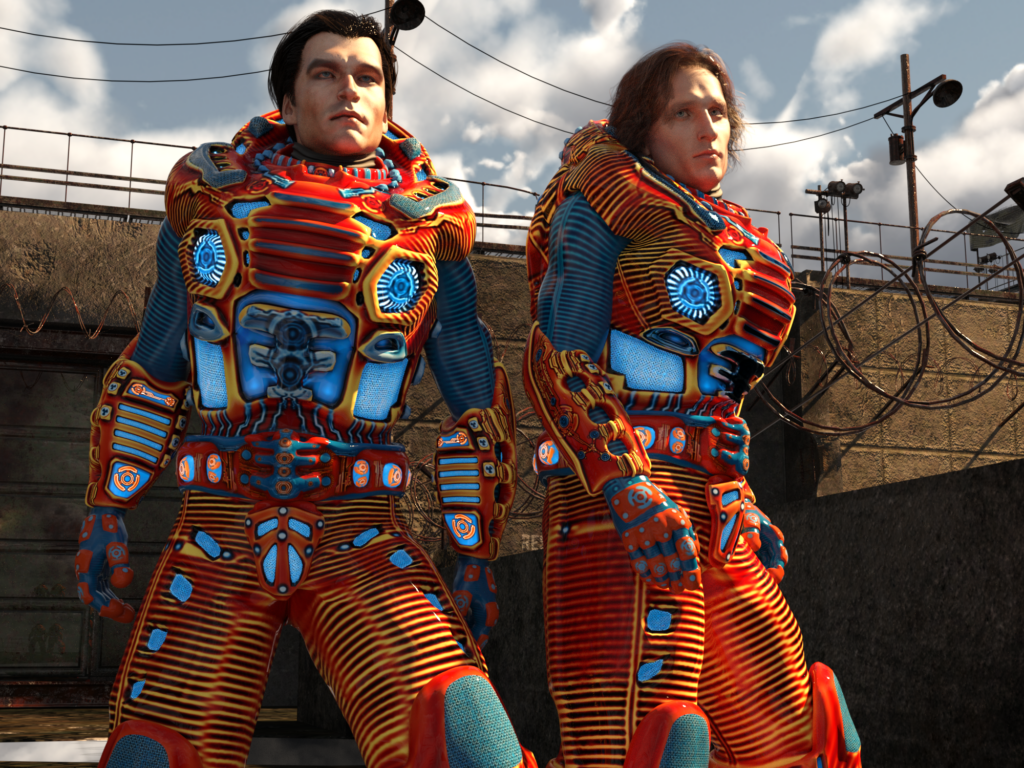 At one time Manuel and Gerhard were marine engineers. The ended up together when they were hired as part of the maintenance team on an ocean going cargo ship. During a severe storm the pair were sent on deck to deal with an electrical problem and whilst outside fell victim to a Quarrud-Xaiqrons attack. The alien ship had been on a slaving mission and was leaving the atmosphere when it spied the cargo ship.Though the aliens never normally risked exposure to far south the opportunity for a quick capture was too good to miss and the severe weather was good enough to hide the spacecraft.

Taken an sold together, the buyers who wanted Manuel and Gerhard merely wanted cheap labour and underestimated the skills of that was perceived “simple slaves”. Working together the pair escaped and over the period of nearly two years made their way home. Along the way the developed a strong bond which meant they protected each other. They also managed to obtain a pair of alien armoured suits.

Upon eventually getting back to Earth the pair discovered that they had been declared “dead”, washed overboard in a storm. Though at first they considered setting the record straight, after the battles they had fought to make it home they considered that with the alien suits they could help protect Earth from alien threats.

In time they started to deal with criminal threats but every time they helped put away a dangerous individual the media did not seem to give them any recognition. Being in the shadow of other heroes soon left them frustrated and so they decided that if the world did not respect them then why should they respect the world. That was when they decided to hire themselves out as mercenaries. At first it took time for them to get any clients as they were simply not trusted after being heroes. Eventually though the criminal community decided to make use of a pair of powerful assets and so the Brothers in Armour went from heroes to villains.