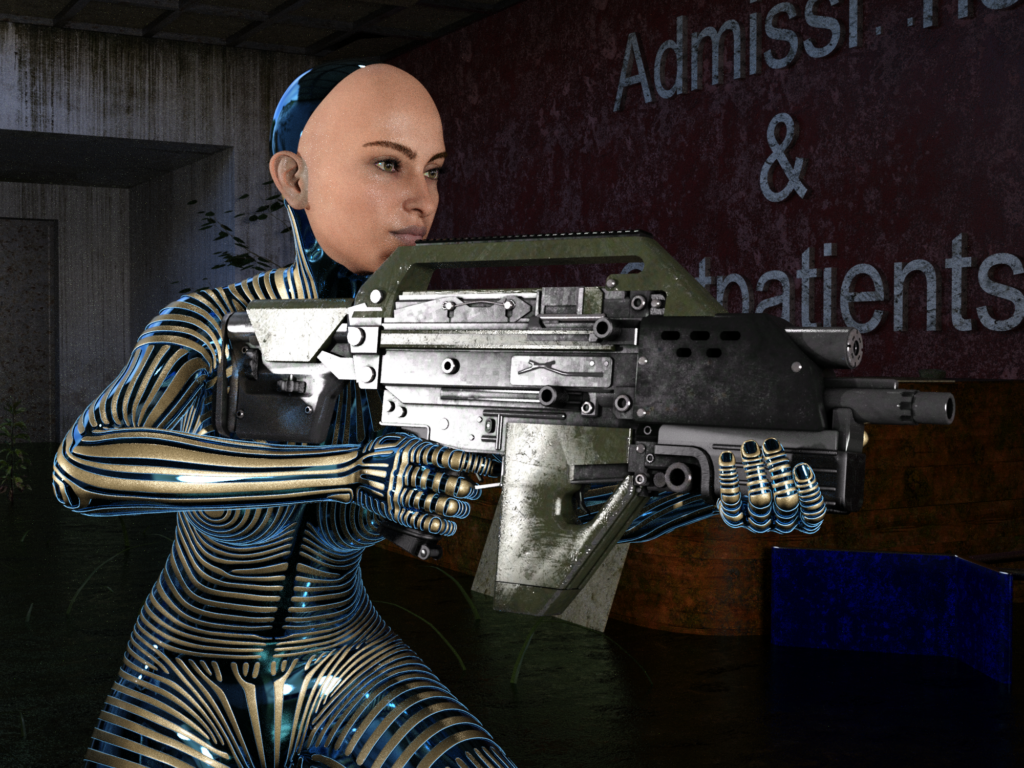 Diana Benson is not from our Earth. In her reality the Russian and American Governments created Raiders to fight in a war that never came. After both countries reached a peace treaty it was decided to decommission all the cyborg soldiers. In America all such “units” were expected to turn themselves in and have the memories wiped. They were then going to be given  new jobs  in the service of the general public.

In this respect Diana was lucky. As a soldier she had volunteered for the Raider programme very late and was in amongst the last batch ever “created” consequently she was of a highly advanced design. Having abandoned the idea of leaving Raiders looking completely human, she had very little organic parts on display and her “skin” was nothing short of highly advanced armour.

Being  an advanced unit meant that Diana and others like her were destined to be given specialist duties such as presidential guard duties. This meant that instead of being decommissioned she would get to keep her memories and military training.

Though she was relieved at this she felt sorry for the other less advanced units who were expected to lose their memories and become little more than machines. Diana even understood why many simply chose to run in order to avoid the fate that awaited them.

In time it became clear that the existing authorities stood little chance of capturing the renegades and so the government created the RRU or Raider Retrieval Unit. Members of the unit were made up of Alpha Superiors and Raiders like her.

Since Benson still “worked” for the government she did not have any choice as to whether to join the RRU or not. She was simply assigned there and was given Donovan Lillard as a partner. He was an Alpha Superior with the means to control and generate tornadoes. Though he had powerful abilities she found his behaviour erratic and his methods efficient.

Despite his short comings, even Diana had to admit that they made a great team. Together they quickly started to become the most successful pairing but then the rebels decided to band together in groups rather than remain alone. That made the work slightly harder but as most groups seemed to prefer running, she and Lillard soon adopted tactics of picking off the weakest members of the herd and letting the rest go and then return later. Over time they could capture entire groups.

Once group though proved extremely resilient and though her and Lillard caught several of them over a two year period the majority of the group remained free. Then word reached them that the group had made contact with an Alpha Superior named Rift. She and Lillard concluded that the group were about to try and escape being caught by travelling to another reality.

Stopping them would entail capturing the entire group in one go and whilst the option of calling in support was there she and Lillard decided they could handle the problem. On the night they knew the group was meeting Rift, they made they move, only to discover too late that a portal had been opened and the renegades were escaping. Instinctively she and Lillard followed only for the portal to close behind them on the other side.

With only a few members of the group ahead of them, Diana quickly concluded that they fallen victim to a trick whereby some of the renegades had deliberately baited them into following so that they would be trapped in a different reality.

Knowing that the main section of the group would perhaps be making a run for in on their Earth, she suggested to Lillard that they find this world’s equivalent of Rift and get back home as soon as possible. Lillard though suggested they try and chase the renegades down before they could cause any trouble in a reality that was not their own. She saw the logic in that and so they singled out one of the Raiders, Omega and began the hunt.

After a few days though Omega managed to lose them. She would not give up having become focussed on her work but when days turned into weeks, Lillard started to lose hope and suggested they simply give in and learn to accept their fate and find a way to live in the new reality. She argued with him about turning his back and he simply abandoned her.

Diana though continued to try and fulfil her duties but a year on in an “alien” world she had to admit defeat. By then both Lillard and Omega had reinvented themselves as heroes. Whether it was down to failure or despair, she could not cope with what had happened and became very angry. To survive she needed a purpose and access to tech to keep her systems properly working. She solved both problems by working for the criminal community either as a mercenary or a retrieval expert.

Diana eventually adopted the name Cross-Wired as her criminal alias, not that it mattered if anyone knew her real name.