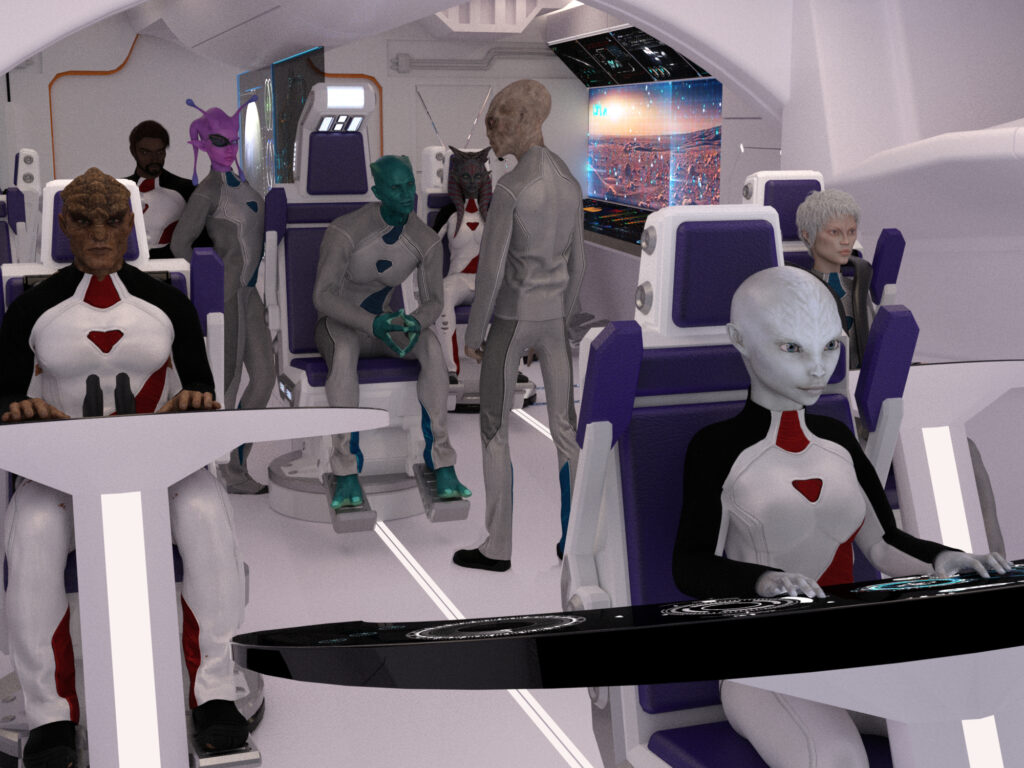 The team known as “Galaxy Force” actually refers to the organisation they work for. Consequently the correct name is in fact “Galaxy Force Team X453W245Z”. The organisation consists of 132 alien races that decided to establish an intergalactic network to deal with alien criminals that jumped to other worlds to escape justice. Concerned only in hunting criminals, Galaxy Force has no associations with the various military forces belonging to each race. In fact they are considered a separate universal entity. Technically this means that two races who are part of Galaxy Force could in fact go to war with each other but individuals from such races would still work together to apprehend criminals. As such Galaxy Force can be likened to CLEA only operating across multiple words as opposed to multiple countries.

Since the people of Earth have limited experience with aliens, they are not officially a member. The Eopua hoped that their edict of restricting visitors from other planets would avoid any hostile aliens but in recent times that has proved not to be the case when the Eopua realised that a number of alien fugitive have got past their patrols and were hiding on Earth. Ironically in keeping out outside interference the Eopua were then in effect sheltering dangerous criminals.

Galaxy Force knew all about the Eopua. Since the Eopua protected the entire universe from outside threats they abided by the restrictions. However when Team X453W245Z were chasing down a dangerous entity known as Ckamillus and the fugitive escaped to Earth, team leader Ozias took the unusual step of asking to speak with the Eopua.

Making his case with them, Ozias made it clear that Ckamillus would kill many innocents unless stopped and implored that the Eopua take action to stop him. Though the Eopua had technology they were lacking in the skills necessary to catch a shape-shifting alien predator. This sector commander in charge of “protecting” Earth then made a land mark decision and allow Ozias and his team to visit Earth and capture Ckamillus.

The time delay though that had transpired during the “negotiation” allowed Ckamillus to get fully acquainted with life and Earth and establish himself in Pacifica. In such a large city he could kill and consume humans without anyone noticing. It was the perfect hunting ground.

When Ozias’s team arrived they set about trying to find Ckamillus. Though Ckamillus could “appear” as anyone he liked to still hunt in the dark and keep out of sight. That actually worked well for the team since they could also hide in the alleyways and thus not “scare any of the natives”. Eventually after several nights and several cities, Aureska got a scent of their quarry. Ckamillus was at the time hunting again and after capturing several victims and confusing them happened upon Ross Devane.

Ross had for the early part of his adult life served in the US marines but was forced to leave from the service after his mother died. Since he was an only child and there was nobody to take care of his disabled father he chose to take on the responsibility. Unfortunately for Ross, two years after he had chosen to do this, the illness that had affected his father finally ended in his death.

Having always been moving around with the marines and never having settled down to build a family meant Ross was alone in the world. He did not really mind. He’s found part time work and the modest income gave him and equally modest apartment, albeit in an area where not many people might choose to live. Having been trained in the military that sort of thing did not worry him. It also meant he was inclined to help others.

This was why when Ckamillus was hunting on that night and he heard a commotion in the alleyway that ran at the back of his apartment building he chose to investigate – with a baseball bat. Once in the darkness he saw nothing other than an old women which he thought way odd. Then it got really weird for the little old woman suddenly transformed into an 8ft creature. Most would have run at that point but Ross’s military training kicked in.

He now proceeded to use that bat on Ckamillus and actually forced the creature to retreat. Charged with adrenalin, Ross chased and managed to trap the beast. A that moment Ckamillus lashed out with its poison barbs and took out his pursuer.

Before Ross became Ckamillus’s next meal though, Ozias and the others arrived and captured it. Faced with a dying human they took Ross back to their ship in order to try and save his life. Though they knew nothing of human physiology they managed to save him but Xeloria warned Ozias that it would take weeks to flush it out of his system completely.

Ozias had hoped to simply return the “alien” home without him knowing and hoped the human would simply consider the encounter with Ckamillus had been a “bad dream”. With Ross needing medical supervision for a while that was not possible, especially as he could not be kept in an unconscious condition since Qorx needed to monitor active brain activity.

When Ross next awoke and found himself surrounded by aliens he actually took the shock quite well. Fitted with a communication device he could understand them. Ozias explained the situation and again Ross found himself reacting calmer than he should.

During the few weeks Ross was with them, the team had time to drop Ckamillus off with the Fruggenat’s before turning around and heading back to Earth after Qorx had given him a clean bill of health. However Ross, having seen all he had did not want to return to his old life. Rules though were rules and Ozias knew he could not upset the Eopua. He had however been impressed by Ross’s courage and his tenacity in trying to take out Ckamillus without any training or specialist weapons and so he once more sought a meeting with the Eopua.

Naturally the Eopua wanted Ross returned to “his people” but had to agree with Ozias in that even with the best memory wiping techniques the human would still retain fragments of his adventure. Ozias argued that Ross had been “exposed” to alien life so it made no difference if he stayed with the team.

The Eopua Commander listened to the argument and admitted that normally he would not allow permission. However he admitted that in recent times their race had learned that other humans had left Earth or been taken. This had made the Eopua start to consider that if humans were to replace them as protectors of the galaxy then they should be given the chance to start gaining experience with other aliens. By Ross joining Ozias’s team it was another way in which the Eopua could see how humans would react to people other than their own.

As the first human member of Galaxy Force, Ross was very much a newbie in all respects. There was not even an “oath” written for the race which meant a lot of things had to be done from scratch. Ross also had to learn other languages and customs which were quite a challenge despite the fact he had regular memory “implants” to help him learn faster.

Some members of the team thought him “simple” or just plain “weird” at first, except for Xeloria. She liked everyone though. Ross was not put off from the negativity and set about proving he was worthy of becoming an equal on the team.

He eventually won over the doubters when on a training mission with Lyisse it all went wrong. Since the Ced where the closest race to humans genetically and biologically she had drawn the short straw to train him. She had thought that Ozias had made a mistake in bringing a “simpleton” into the team but followed orders.

All the pair had to do was collect a Hotobargo called Freeyul that was a suspect for smuggling biosamples to Rleyuis a race known for dealing with slaves. The Ced Government wanted Freeyul captured at all costs. They had the location of the base and since Hotobargo worked alone it was only going to be a simple grab and run mission. This sort of thing was perfect for training since it would give Ross experience and there was no danger.

However the mission went sideways and Freeyul had learned that Galaxy Force were on to him. Knowing if the Ced found him guilty he would be executed, Freeyul had brought some of his brothers along for added protection. Lyisse took point and soon found the area swarming with Hotobargo. She told Ross to retreat to the ship but before she could make it back she was caught.

Ozias contacted the Ced Government and updated them on the situation. Despite Galaxy Force reinforcements would be coming within the day they were not pleased that Freeyul had one on their own which they knew would be used as a hostage. Until then the team were told to stand down. This was against the protests of Reptar and Ross.

Whilst Reptar would begrudgingly follow orders, Ross could not. Throughout his military career he had learned that “you leave nobody behind”. Whilst he knew he was risking his position on a team where most did not want him he could not stand by. He therefore went down to the armoury and took as many weapons as he could carry and then single handedly stormed the compound.

Eventually he found Lyisse in a cell and she looked like she had been tortured. Barely able to stand he had to drop his weapons and carry her back to the ship, whilst being chased by twenty angry Hotobargos. The first time the other member of the team knew what Ross had done was when the ship was getting hit by weapons fire.

Ix prepped the ship for immediate launch whilst Alocnu, Xeloria, Ozias and Reptar went outside to provide covering fire. Though Lyisse was saved, in having to flee from the planet the team lost Freeyul. The Ced Government, whilst grateful there was no longer a hostage situation where not happy that Freeyul had got away. They wanted the human thrown from the team but Ozias refused unless his own people told him to do it. Further more the rest of the crew would only agree to it if their peoples told them to carry out the order.

Ross was already contemplating leaving after he knew he had failed to follow orders but the solidarity of the rest of the team gave him pause to rethink. They had now accepted him. Even Lyisse who had previously “disliked” him acknowledged that without Ross and his actions, she had no idea what the Hotobargo would have done to her.

Ironically this would later lead to the pair having a closer relationship which would present whole new challenges between them understanding each other’s cultures.

Though he was accepted on the team and had earned his place, the one oddity he did face was the fact they all called him “Rizz”. Even with the implanted communicators the other members of the team simply could not pronounce his name.