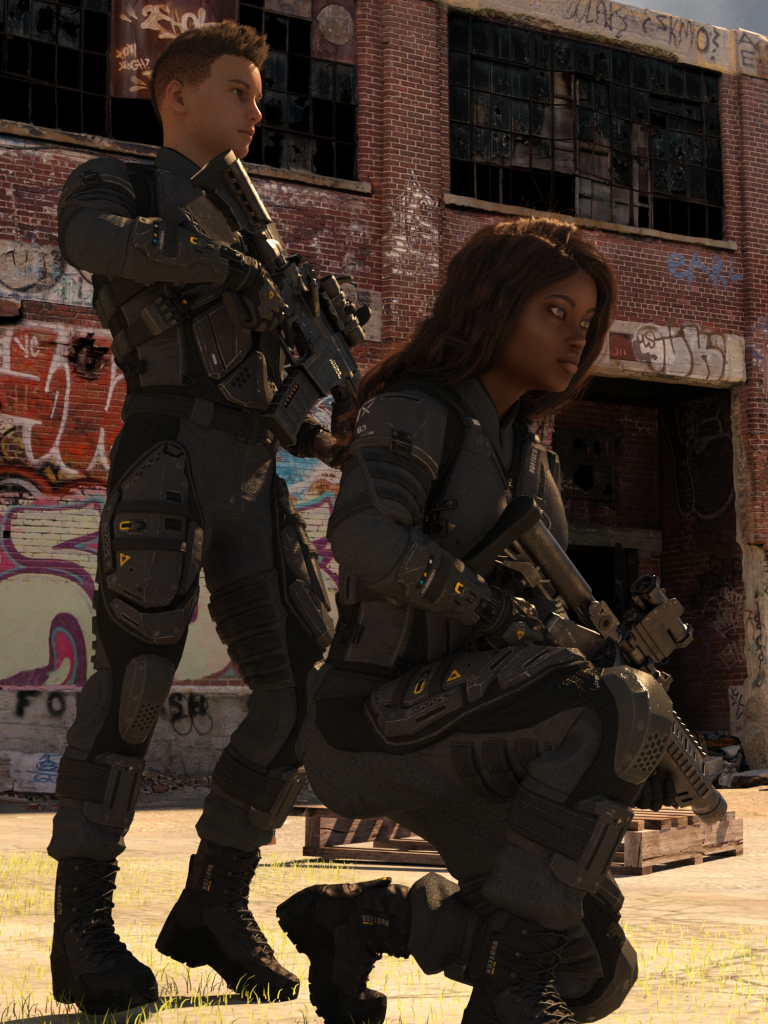 Like many of the teenagers in Citadel’s employment, Nadine and Guy were runaways. Snatched from the streets they were destined for use in one of the research group’s experiments. Young adults were quite a valuable commodity as test subjects. Smaller physically than a full sized adult allowed them to try out tech built by aliens that were of similar size. Another reason younger test subjects were used was that as their bodies were still growing they could sometimes adapt to the integration of foreign biology or artificial implants. It was for the latter reason the pair were used.

Citadel had managed to capture an alien group. Studies had shown they appeared to be advanced hunters. Scientists working for the group were curious at the fact that each member of the party seemed able to communicate without speaking. Though they possessed vocal chords they did not seem to need them.
After some detective work they learned that each of the aliens had an implant that essentially networked their brains together. This allowed them to communicate without speaking as well as exchange information quickly.

Figuring such a device could be extremely useful for soldiers the scientists set about trying to remove one in order to study it. The devices though grafted themselves to the brain, so removing it killed the host. Several of the alien group died before Citadel recovered a complete unit. Rather than risk their lives the other aliens agreed to help Citadel with its experiments in return for their lives.

A built in fail safe allowed the units to be removed easily but it took the co-operation of the aliens to reveal that. Once the devices had been removed from the remaining member so of the hunting party, Citadel wanted to adapt them for human use. Even with the “help” of the aliens several human test subjects died during implantation but two, survived, Nadine and Guy. Like a lot of teenagers used by Citadel, by the time they became used in the experiment they already been indoctrinated into the group by use of drugs and “mental adjustment”. This meant they were willing to do anything for Citadel.

Initial tests between the teenagers was not hugely successful. What the Citadel scientists failed to realise was that it took several weeks for the units to properly integrate themselves. Once this actually occurred, Nadine and Guy found themselves able to “talk” to each other without and word passing their lips. Since the units were designed for hunters the pair were able to see tactical “displays” in their minds.

Lab tests would only go so far and the leaders of Citadel wanted real world tests so they put them in the field.  Before this could happen the pair were subject to a second experiment in that they were given a prototype armour that had incredible stopping power of even large calibre weapons. Since it was so tough the pair were given the code name “Pangolin” and assigned tasks such as protecting Citadel facilities, retrieval of escapees and the capture of new test subjects. Being able to share tactical information and implement it has made them better than normal soldiers. Anyone that tries to stop them often misjudges their ability to succeed purely down their age.