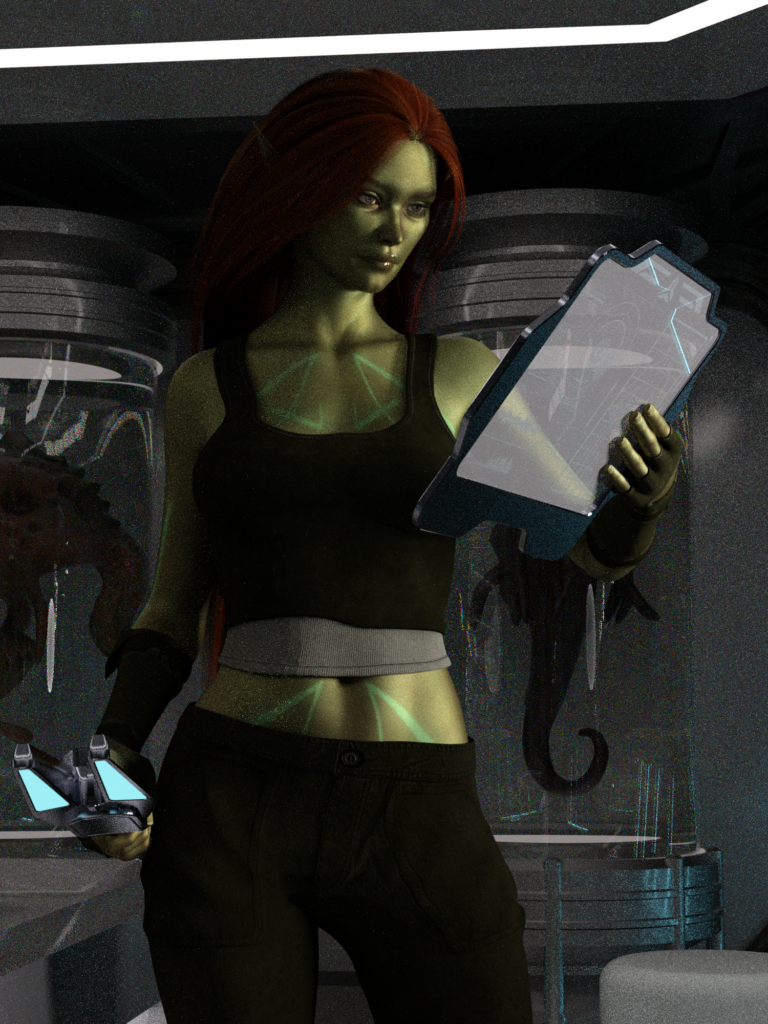 Lindsey Kaye was a scientist/xenobiologist working for Citadel. She was part of a team that was sent to investigate a crashed alien ship. Onboard the ship was a female Falanek who was dying. What Kaye did not know was the Falanek was carrying a symbiotic alien plant species known as a Tressant. Since its host was dying, out of desperation it forced itself into bonding with Lindsey. As it merged her physiology started to change slightly. The other member of the team witnessed the “attack” and isolated her.

Back at a Citadel facility Lindsey was interviewed. She knew nothing of what had happened but then the Tressant spoke through her. It announced itself as an individual called Yadzek Timarae and that it was being hunted by Luzerran hunters. Its previous host had tried to help Yadzek escape by heading into Eopua controlled space but the ship had been damaged and, hence, had crashed on landing. With limited options it had chosen to bond with the nearest human in order to survive. Yadzek made it clear that its race were like observers and simply inhabited the same body as the host for mutual benefits. The symbiont explained that until it was fully integrated the two would become one but until that occurred then then they would act as separate entities each taking control of the same body in turns. Yadzek continued by stating that rogue members of its race had learned to take full and permanent control over their hosts and this had disastrous results on the Luzerran home world hence they hated their kind and viewed all Tressent as a disease that needed eradicating. Now merged with Lindsey all it wanted was sanctuary.

Citadel leaders proposed to simply purge the symbiont from Lindsey’s body but the Tressant offered thousands of years of galactic knowledge. This bargain could not be overlooked. However they needed proof that Lindsey was still inside so Yadzek released control. Since both hers and the symbiont’s memories were starting to merge she told her supervisors that she could see great potential in allowing the integration to continue. With Yadzek’s knowledge she believed they would be able to progress rapidly beyond their current level of understanding and though it meant sharing her body she felt the sacrifice was worth it.

The supervisors accepted her plea but for a long time kept close supervision on her. As time passed she and Yadzek became one. When one was in control of their body the other would act as a “voice” in the mind. With Yadzek’s help, Lindsey was able to gain many new skills which put her in a very high research position which involved conducting experiments on Citadel’s alien captives.

Before Yadzek merged with her, Lindsey used the alias “Professor Green”. Now with her pointed ears and green skin colouration the alias is quite ironic.  She still maintains the name despite no longer appearing completely human since it prevents enemies getting to her via threatening family members.