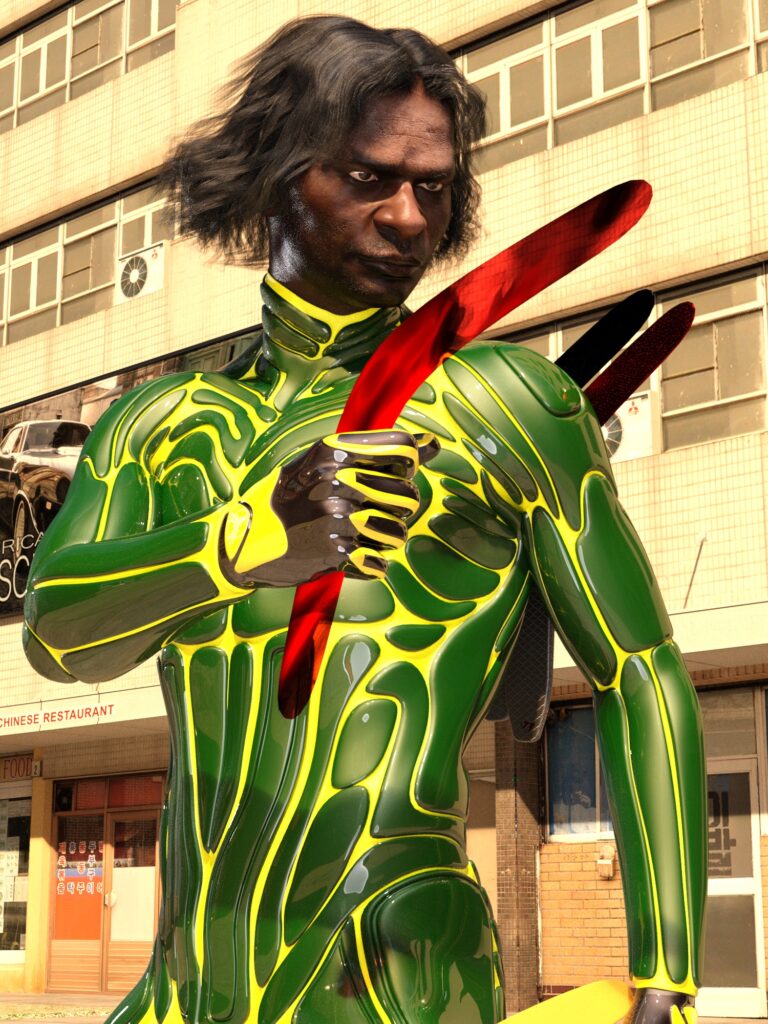 Compared to other Alpha’s Bilyana “Bill” Tjungurrayi does not have any outward signs of manifesting super powers nor can he read minds. However his particular gift put him in league with other “mental” Alphas in that they have above average intelligence or inhuman intuition. In Bilyana’s case his mind and body are in such perfect alignment he can pull of amazing feats that most people would find difficult if not impossible. An example of this is the fact that before throwing a boomerang his mind sees the exact trajectory it will fly. His senses detect any slight variances in wind speed and direction and his mind compensates accordingly. Then his body can automatically adjust power to ensure a target is reached.
Where he grew up in central Australia nobody had ever really had much contact with Alphas so his parents assumed Bilyana simply had excellent hand-eye coordination. His throwing skills made him something of a local legend and though the family lived far from the hustle and bustle of crowded cities, the outside world would eventually encroach with disastrous consequences.

The family land that had belonged to them for many generations had the “misfortune” to be rich in mineral deposits and a business corporation based in New Tokyo wanted the land desperately. The family though were not interested in money so the mining company played hard ball. Legal proceedings and the appropriate people paid off meant the family was close to losing the land until a journalist in New Tokyo made contact.

She wanted to expose the family’s plight and show how the mining company which marketed itself as respecting people and the environment was nothing but a lie. Such a scandal would certainly have a drastic effect if word leaked out. Since she could not make the initial journey to central Australia due to work commitments, Bilyana as the most able family member chose to visit her. This would be a major challenge in his life for he had never been in a big city before let alone a megacity. However as he set off on his journey neither he or the journalist realised that they were trying to upset the wrong people for the mining company was an enterprise run by Black Shadow.

Black Shadow felt under pressure to do something or risk something of their plans getting some unwanted attention. They therefore called in the Shadow Squad to evict the family (thus giving no direct link between the company and the family). This they did in spectacular style by massacring everyone. Bilyana though escaped the carnage for at the time he was travelling east for a liaison with the journalist. Upon arriving in New Tokyo work eventually reached him and the journalist about the tragedy. Not sure what was going on the journalist feared for their lives and made plans to get away. However since the Shadow Squad had not eliminated Bilyana and the journalist was next on the target they were dispatched again, this time to silence the troublesome pair altogether.

When they struck she was killed but he escaped due to his Alpha ability helping him to avoid being hit. Using the boomerang he had brought along (to show the journalist and example of Aboriginal crafts) Bilyana fought back but one against four trained mercenaries meant it was not a matter of if but when he was going to be killed.

Luckily Luna arrived on the scene and got involved but her interference only made the Shadow Squad’s plans awkward. She fought bravely trying to get Bilyana to cover but the situation looked hopeless until the Ring of Steel arrived. They had heard of the massacre of Bilyana’s family and thought it was the work of the Raiders. Knowing the cyborg’s only did such crimes if they were paid led the group to concluding that Bilyana was next on the hit list after they learned he had travelled to New Tokyo.

Though they did not find whom were expecting the appearance of Ring of Steel did turn the tables against Shadow Squad. Rather than allowing any more collateral damage and risking anyone else getting hurt in the cross-fire Ring of Steel chose to evacuate Bilyana and Luna instead.

The pair where then brought back to the base Ring of Steel shared with the Knight’s Forge. Here Bilyana had time to deal with his loss whilst Ring of Steel tried to learn why the Shadow Squad had killed his family. It soon became obvious that Black Shadow had sanctioned the attack and until so long as he was alive and could “speak” he would always be a target.
Nowhere was safe for him but he refused to hide for the rest of his life. This was when Luna suggested he might be an Alpha, which was quickly confirmed. She suggested he might use his skills to fight those that had caused him the pain and loss but revenge was not his way. He did however accept her offer of a place to stay so once thing had quietened down in New Tokyo the pair were brought back to the city.

Whilst he stayed with her and worked out where his future path lay, he could not help notice her night time crime fighting “hobby”. As time progressed he realised the skills he had learned in the bush could be useful. That’s when he saw his future path. Though he would not allow darkness to cloud his actions and would not actively seek revenge against those that had caused him so much pain, Bilyana felt he could at least help prevent others becoming victims of wrong doing. He began accompanying her on her escapades using his tracking skills to guide her to where she needed to deal with troublemakers and on more than one occasion he actively involved himself using his boomerang to save her from a situation that got out of hand.

Word of a boomerang wielding hero soon got around on the streets of New Tokyo and in time trouble soon began to come looking for him for the usual sources that hated heroes ruining their street “trading”. The Knight’s Forge also realised what Bilyana was up to since they had monitored him since he had returned to New Tokyo. To increase his odds of survival they sent him an outfit of body armour and several specialist boomerangs that have various capabilities (such as the flash boomerang which emits bright light when travelling or the sonic boomerang which emits a high pitched sound upon impact to disable its target). From then on he became known as Rebound.

Alongside Luna the pair were relatively successful in keeping “their” area of New Tokyo trouble free and they remained together for a while before Bilyana felt the need to discover what had become of his family’s land. On his journey west he used his skills as “Rebound” to put a stop to any injustice he happened across which made his travel take far longer than he had anticipated. Then when he arrived in the area he had known as a child he discovered it to be unrecognisable. Unclaimed the mining company had taken over and that only confirmed to him that part of his life was gone so for the second time in his life he headed east, back to New Tokyo and like the first part of his journey he helped people where he could.

By the time he made it back to New Tokyo three years had passed and he had gained confidence as a lone here. No longer daunted by the big city and not wanting to impose on Luna he opted to continue his crime fighting journey through life alone. However he as not alone nor would he ever be for he soon found new friends as he encountered other heroes. Sometimes he leant a hand when their goals did not interfere with his own morals, and on more than one occasion he teamed up with Luna but the partnership was never made permanent for he felt the need to constantly move around. Perhaps his biggest honour was being made a reserve member of the Phoenix Alliance.
Having never chosen to pursue Black Shadow the crime syndicate decided to leave him alone…for now!