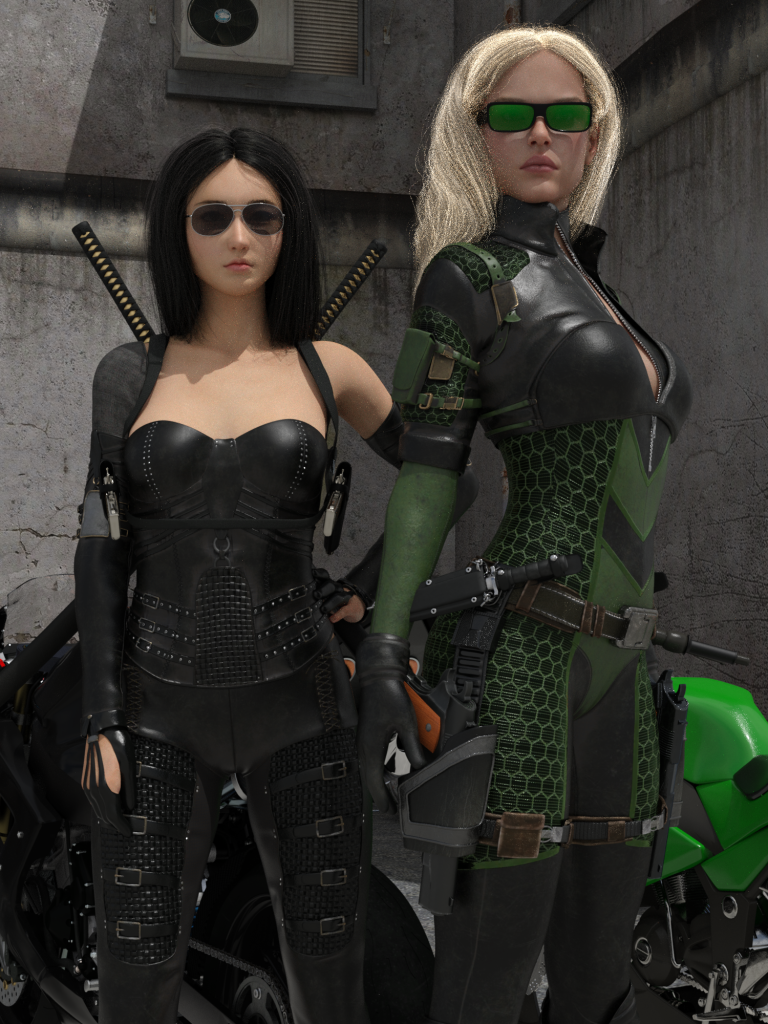 Both of these women were once members of the Road Warriors team before separating and becoming a partnership. Since they are not Alpha Superiors the pair rely on their wits and their skills to overcome the odds  when fighting criminals. Whilst Emerald and Rose came from completely different backgrounds they found a common enemy in the Renaissance Mob.

Elsa at one time had been backpacking her way across Australia. She arrived at the small town of Irwin’s Crossing and fell foul of the corrupt sheriff who had links with the Renaissance Mob. Being alone and knowing nobody would miss her the sheriff detained her on a false charge and then handed her over to the Mob who took her to their ranch and hired her out as a sex slave.

She eventually managed to escape and wanting revenge became a gun for hire. Then when she figured she was good enough, returned to Irwin’s Crossing.

Rose fell foul of the Renaissance Mob when she was sent to assassinate, Big Ron it leader who had been ear marked for death by the Jade Emperor. Another member of the Twelve betrayed her and told Big Ron of the impending danger and she was captured.

Like Elsa, Rose was held for use as a sex slave only she could never leave the ranch and instead of ‘entertaining’ clients her sole purpose to serve other mob members. Since she had tried eliminating their leader, they were free to do with her as they liked, often subjecting her to torture and abuse. All other times she was kept in chains like an animal.

Reluctant mob member, Dave Lynn could not stand to see what a woman, any woman treated that way and so helped her escape. He then had to flee the mob himself or face the consequencies. The pair ended up at Irwin’s Crossing and Dave was only permitted to ‘live’ because his brother ‘Atlas’ was a loyal lieutenant for Big Ron.

Unable to return to the Twelve due to her failure (despite the fact she had been betrayed) Rose had lost her purpose. She therefore dedicated her life to hurt the mob using her assassin skills to disrupt their operations in the area. Dave provided the intel but, two people against a cartel only one of which was ‘a combatant’ was no contest. Rose had to act by stealth to avoid getting captured and since Dave was known around town as the mechanic, it was important for her not to get her activities linked to him by the mob.

Some months after after starting her crusade, Elsa showed up with similar plans. Figuring she could stir up  hornet’s test with her brash tactics. Rose managed to make her see sense and helped train her up with additional skills learned from her time with the Twelve.  Along with Dave, Elsa and Rose became the Road Warriors.

Though the pair on bikes caused trouble for the mob, they were seen as little more than an annoyance. Nevertheless Atlas and Big Ron wanted them gone so when Mackie and Spectre showed up in Irwin’s Crossing, he used his charisma and duped the pair into going after the Road Warriors by convincing them that the girls on bikes were outlaws harassing the local people.

Spectre and Mackie soon learned who the real bad guys were and joined forces, increasing the Road Warriors to five members. Using their combined skills they caused severe harm to the Mob. The Mob responded by trying to take out Spectre with an EM pulse but that resulted in the ‘creation’ of Spirit. Another vehicular lifeform in the area forced the Mob to retreat from Irwin’s Crossing.

With the Mob gone and Spirit added to the Road Warriors. Rose and Elsa began to feel surplus to requirements. The pair, having gained a strong friendship decided that perhaps it was time to leave in order to find new challenges and though, Dave, Mackie, Spirit and Spectre were reluctant to see them go they parted on good terms.
Despite running their own operations they still maintain contact with the remaining Road Warriors and have on occasion teamed back up with their old group. However since the split the pair have gained a reputation of their own thus ensuring that history will remember them as “Wheels of Fury”.