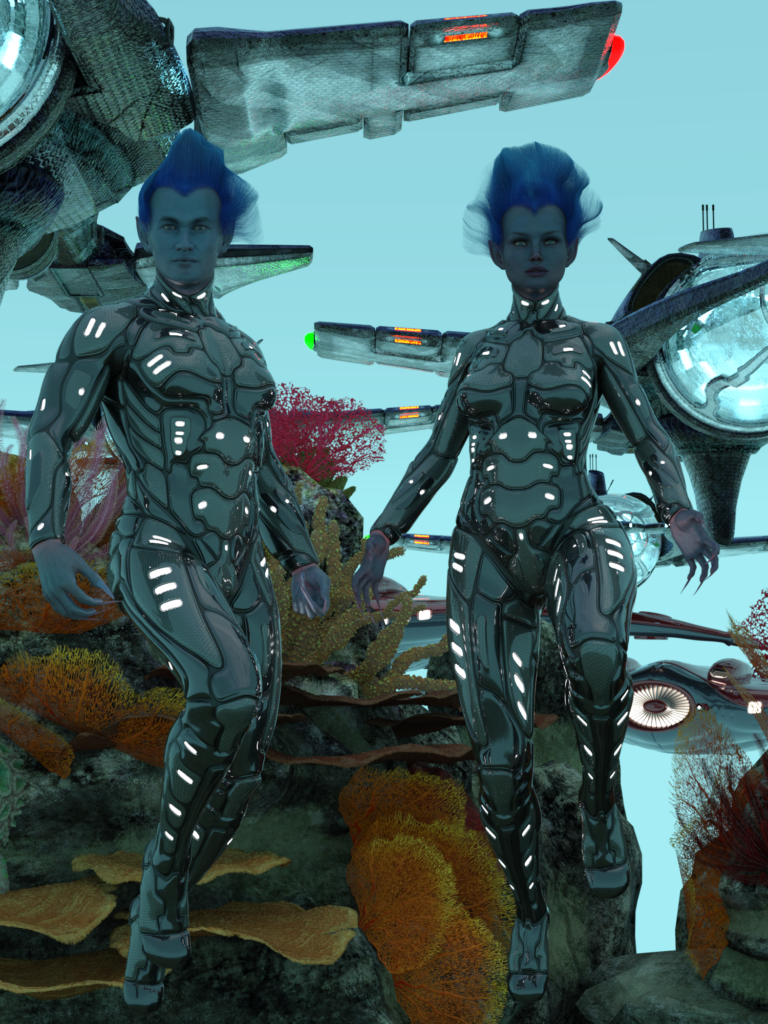 CLEA has not had much large scale encounters with the Merlateenan unlike other aquatic groups of heroes. Whereas the only other aquatic alien raiders, the Glissen are simply aggressive the Merlateenan have a purpose in what they are doing and could be considered even more dangerous but unlike the Glissen they will not go looking for trouble. However they will attack if challenged and possess technology that makes them unstoppable underwater.

As far CLEA is aware the Merlateenan are conquerors of aquatic planets that they add to their empire. In general they have no interest in “land people”. This means that they would normally have no interest in humans or the Earth. However the location of our planet is strategically important to them for use as staging grounds for attacks on other races, a means to limit stretching out supply lines. Since our world has two thirds of the surface covered in water they have taken the unusual step of trying to establish an undersea base. Since they require water to survive the space ships they travel in are built for speed and defence. They are more vulnerable in space than most other races and so they avoid encounters with other races until planet side.

Since the Merlateenan subjugate intelligent underwater life forms this has made them a threat to the known races of human species beta that live underwater. Unlike on land and even in space where there are many costumed adventurers and CLEA has its own assets, currently there is very little the agency can do to deal with the Merlateenan directly unless they chose to come to the surface

At depth the Merlateenan cannot be fought since only a few military submarines can reach them. However they need to obtain raw materials in shallower regions where they can be engaged . It it was not for the dedicated work of groups such as the Taniwha and the “unofficial” Ocean Deep group who put a stop to the Merlateenan resource gathering, in effect waging a conflict of “attrition” then then the Merlateenan would have managed to gain the foot hold on our world that they so desperately desire.

The Taniwha were the first humans to come across the Merlateenan. They repelled the aliens and thought they had stopped an invasion. Only later did they discover that they had merely dealt with a resource hunting party. Having proven that “land beings” could be a threat the Merlateenan sent future expeditions with more armed support in the form of various drone craft.

It took quite some time for CLEA to realise that after every clash, the Merlateenan did not leave the planet but merely retreated to a base deep in the Pacific. Unlike other alien races which would send in additional forces from outside to deal with problems, the Merlateenan seem to several limit this and instead rely on equipment they brought with them. This could indicate that whenever the steal resources they can actually build replacement weapons. The use of mechanised/automated forces also means that only a small occupying force is needed to control a very much larger “army”.

Unconfirmed reports suggest the Merlateenan force is under the command of a royal prince and princess with perhaps only thirty of forty other individuals in charge of the automated systems. There are also rumours that they occasionally take human captives to study and interrogate. Since such prisoners would be taken to the base on the ocean floor there is no possibility of rescuing them.