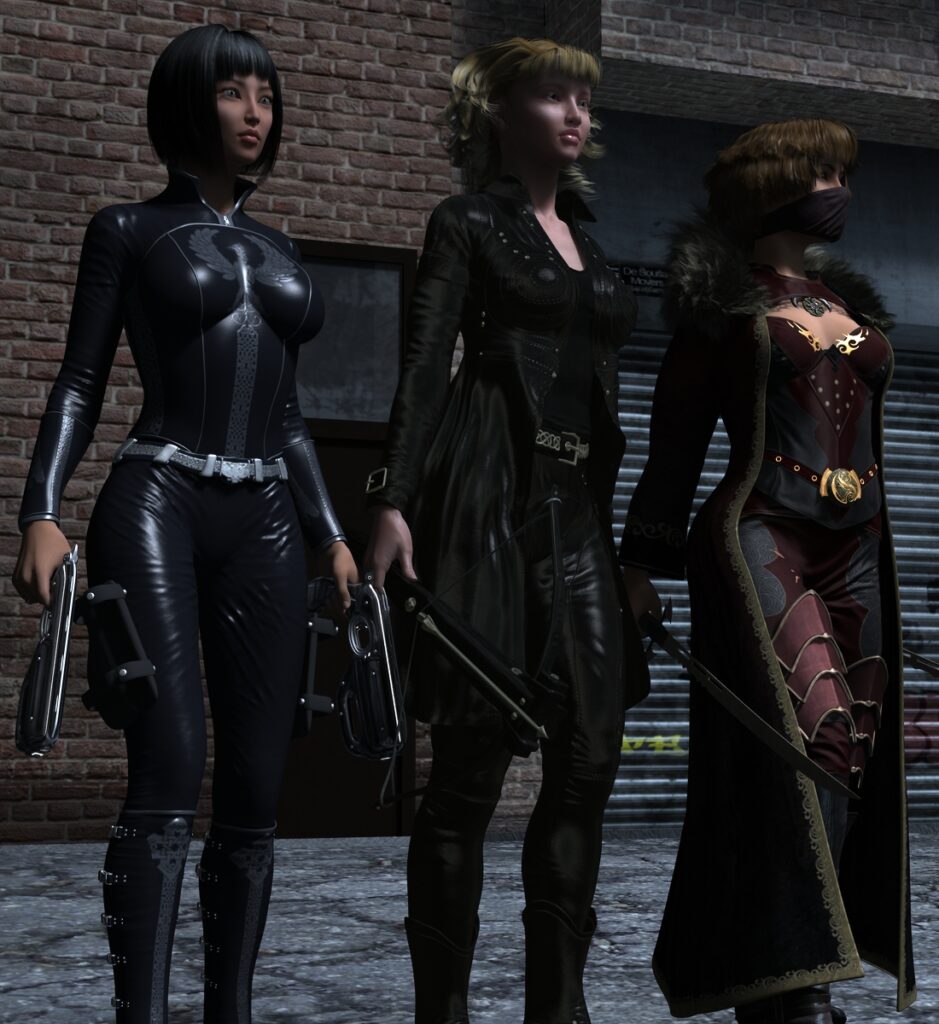 Known unofficially as “The Slayers” this trio of women specialise in chasing down animal  hybrids.  Their hit list excludes Alphas that mimic animal attributes  but does include animal hybrids and bacteria X creatures. They have even hunted Beastial’s victims. To many the trio might appear heroic but the people/creatures they target are attacked whether they have done anything wrong or not. Once the have captured their “prey” the group always follow the same pattern of going to ground and for a long time remained a mystery to CLEA until the agency learned they were working for the Praetorian Club. a

CLEA became interested in The Slayers primarily because when they first surfaced they began attacking human/animal hybrids, seemingly at random. Whether they were heroes or villains the Slayers would chase them no end and on a number of occasions if it was not for the intervention of local law enforcement the trio would have succeeded in killing or capturing their quarry.

Upon opening a formal investigation, CLEA top brass believed the Slayers might operate like other known assassin groups but the more agents dug up information the more confusing the data became.
Early on it was learned that the Swordswoman was their leader and each of them seemed to specialise in one particular weapons set which when combined as a group made them the ultimate animal hunters. Then things got strange, for agents uncovered the identities of the trio they learned that original they had no direct links to each other. Kennedy was a research assistant, Dumitru a finance broker and Nakagawa was a secretary. Not only did they not work for the same company but none of them came from the same city.

About the only thing they had in common was around the same time all three disappeared from their old lives at the same time. Police reports had been filed on all three as missing persons by their worried families. Then when they next appeared they had changed completely. Neither contacted their families or even seemed to possess a desire to do so and they had suddenly gained weapons skills.

Investigating if the three had been in contact before they “vanished” revealed nothing, so further deepening the mystery. Since CLEA has not managed to apprehend either of them, agents have had to work with reports filed by police officers around the world.

All reports, whether from Europe, Japan, America or anywhere else state that officers who tried to arrest them are warned not to interfere in their “work.” Usually the officer would then be incapacitated but otherwise unharmed.

Due to their total lack of emotion and unnatural personalities, CLEA scientists originally speculated that the Slayers have been placed under some direct mental control or have been “conditioned” to fight and target specific individuals. It is assumed that this took place during their two year absence. This later turned out to be true when an undercover operative infiltrated the Praetorian Club and learned the woman where call the Urbanae and their purpose was to capture hybrids to be used in blood sports.