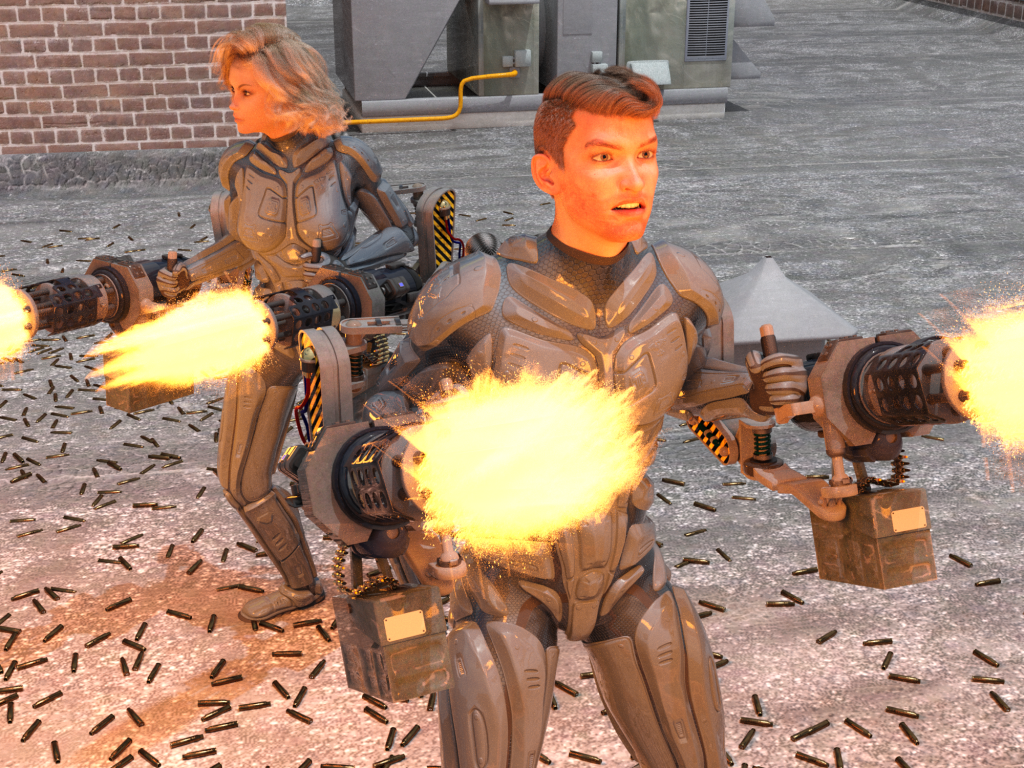 A brilliant engineer from an early age in his adult life Lambert eventually found he had a particular talent for designing weapons. Unfortunately for him he could never find the right “job” to make use of his creative mind. Ideally he wanted to set up his own company and supply weapons to the military and armed services but he had no money.

Then he received an offer that apparently gave him everything he wanted. He was told he had been head-hunted by a private weapons R and D company and in return for his expertise he would own part of the company and shares in the profits. What he did not realise was the people making the offer were Black Shadow and since his “dream” was coming true he never bothered to ask too many questions. In time he supplied a good proportion of tech to the syndicate’s arms supply “business” and as promised he got rather rich.

The first time he began to suspect that not everything was above board was when he saw a TV news report where an armed gang where engaged in a shootout with the Pacifica Police Department. He recognised one of the gang was using one of his “unique” weapons.  Upon seeing this he demanded an explanation from his employers and he was surprised when they admitted who exactly they were. They also warned Lambert that since he was now allied to the Black Shadow syndicate he would be guilty in the eyes of the law for any crimes in which his weapons were used.
In too deep, he contemplated risking going to the police but then considered what he had been warned so instead he decided to try and undermine the syndicate but creating and supplying weapons to their enemies. For a year and half he did this before getting found out and the senior members of Black Shadows were not happy. Figuring Lambert was more of a liability than an asset they dispatched an assassin to “take care of the problem”. The assassin carried out the hit but was only partially successful in that despite shooting Lambert in the head he managed to survive. He would later recover in hospital but neurosurgeons could not repair all of the damage to his brain. The part most affected was the area that controlled reasoning and judgement and effectively reversed his old personality.

Upon leaving the hospital his first actions were to return to his place of work put on his latest weapon system (a portable mini-gun system) and kill everyone in the lab. He found pleasure in death and destruction and that incident was the birth of “Arsenal”.  From then on he hired himself out to anyone that needed “problems” taking care of. When he was short of money he simply robbed banks and there seemed to be no end to his violence. Police psychologists certainly did not have any problems calling him a psychopath but if things were not bad enough for law enforcement agencies that crossed his path, when he met Sofia his violence escalated further.

Though she was not known to have violent tendencies in her early years, as young adult she became fascinated with guns and gun culture. She admitted she was a bit of a “gun nut” and spent a large proportion of her free time collecting weapons or visiting the gun range to try out her new acquisitions. It was here she met Nathan Clarke and once they got talking he realised he could perhaps use her in his one man war against crime. When it came to suggesting she become a vigilante he was surprised how easily she accepted the offer to “work” with him. Since she had natural weapons skills there was no need to train her and they set out to clear the streets of scum. As with most of his “campaigns” he would usually start somewhere and move on when things got “too hot” and since the pair was in Pacifica it looked as good a place as any to iron out and kinks in their working relationship.
When working alone, Nathan would normally scare criminals into mending their ways. Since he intended Sofia to be his protégé he expected her to follow his lead but the more he continued to patrol the streets with her the more he noticed signs of trouble. Instead of merely scaring criminals she seemed to be deliberately target them. Not wanting to get either of them done for mass murder meant Nathan constantly had to be on his guard to stop Sofia before she went too far.

Things would come to a head when Nathan crossed paths with Arsenal. Though Lambert had no problems trying to fill either of them with holes, Sofia was finding it hard to keep restrained and eventually went straight for the kill. Nathan had to duck for cover as pair exchanged fire. There was no way he was getting between the pair but as the two combatants fought he noticed that Sofia could not make a dent on Arsenal’s armour whilst at the same time Arsenal did not seem to be attempting to kill her. In fact he seemed to enjoy toying with her. Nathan thought that was strange and he feared for Sofia’s life when she ran out of bullets and Arsenal approached.
He grabbed hold of her, and Nathan never forgot the words he said to her, “I can set you free”.  He then handed her two guns and shoved the business end in his chest at which point he told her to “Make your choice.” Sofia seemed to take a few moments to think about shooting Lambert but as soon as she turned and aimed at Nathan he realised she had been totally seduced by Lambert’s power and violence.  Nathan was lucky to escape with his life in the barrage that followed.

Once Arsenal and Calibre (Sofia) started working together they gained almost instant notoriety and started appearing on almost every law enforcement agency’s most wanted list. To encourage Sofia’s violent side he eventually “upgraded” her weapons by building her a similar unit to his own and from then on they became hunted by CLEA as well.

Though classed as mercenaries, in truth the pair will commit almost any crime but their job opportunities are somewhat limited due the fact the pair like enjoy causing massive collateral damage and raining down destruction. Lambert in particular has no issues in killing anyone that gets in his way. For this reason employers tend to prefer the pair to work alongside other hired help, whereby the pair either acts as support or a diversion. Rumours picked up by CLEA agents have made note that some criminals refuse to work with the pair because they consider their unpredictable nature is too dangerous to be around.