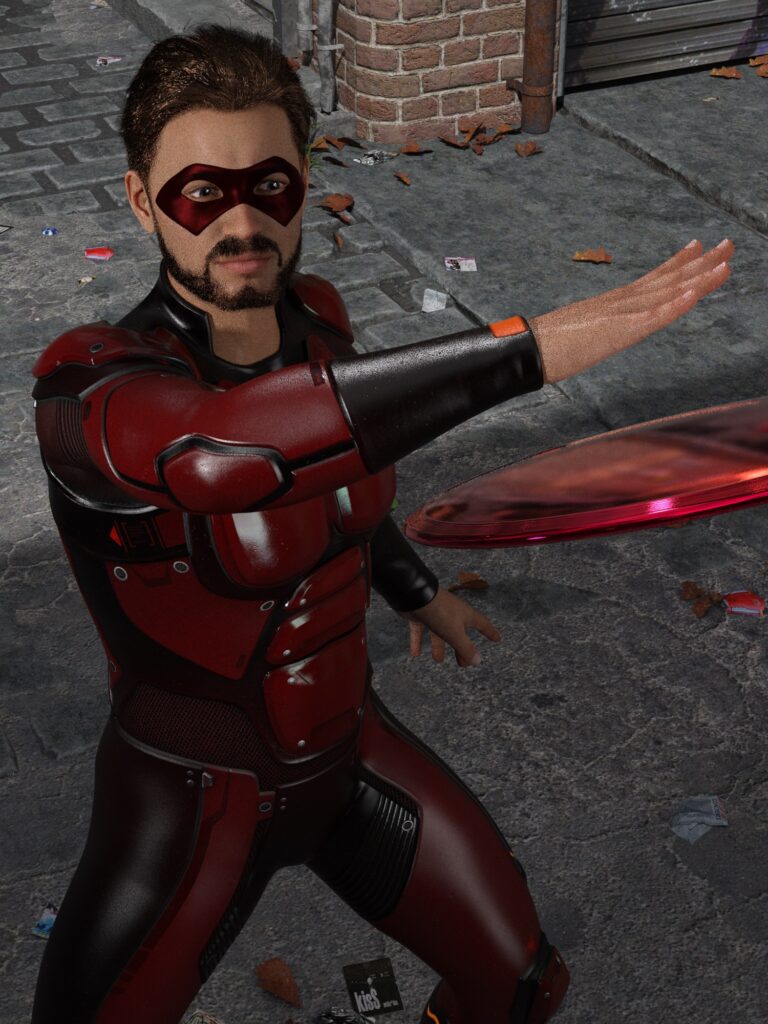 CLEA cannot often boast to having generations of the same family working for the agency but the Smith family was one of the exceptions to the rule. Paul’s Grandfather was a Special Agent, his father an Intelligence Gathering Operative so there was much for the young Paul Smith to live up to. At a young age Paul’s father taught him the values of honour and discipline, important life lessons if he was to succeed in working for CLEA when he grew up.

With his life mapped out for him he decided when he was 18 to join the agency and begin training as a junior field agent. All the while he was doing this he was unaware that he was an Alpha inferior and despite the fact he had never been ill throughout his childhood there was no reason to suspect his potential because there had never been an Alpha in the Smith family.  It therefore came as a complete surprise to the entire family when at the age of 20 his Alpha abilities activated

Suddenly finding that he could link his mind with animate objects and make them an extension of his own body certainly changed his status as a junior agent. His superiors suggested Paul sign up to the White Guardian program but as that meant he could be shipped out to anywhere in the world it did not fit in with the type of lifestyle he preferred so he chose to use his special gifts by becoming a costumed adventurer in his spare time.

The decision caused a rift not only between him and his father but also between some of the other CLEA agents he worked with as they thought he was dishonouring the agency. For the benefit of all concerned he left CLEA so he could pursue his goal of becoming an Independent hero (alternate name for vigilante). This meant like many which did not have a personal fortune he had to work to earn a living as well so he took a job as a delivery driver..

Mastering his abilities took some time and eventually he realised that if he handled an object and concentrated on it for a period of time, sometimes up to an hour his mind would somehow “lockon” to the object and he had the means to move it via a focused form of telekinesis. Breaking the lock between himself and an object proved just as time consuming so eventually he chose to stop “playing” and just choose one object and stick with it. Paul therefore selected a flying disc and learned how he could manipulate its flight once it left his hand.

Once he felt he was ready Paul took on the codename of Discus and began patrolling the streets at night, taking out petty criminals by using the disc as a weapon to stun his targets and leave them for the police to deal with. Though his past CLEA training meant he had the means to handle himself is a criminal got close and personal, Paul found that the ranged attack had the best results since he could deliver the discus from any direction and take a target by surprise. Word got around with the Pacifica Police Department and he gained the respect of a number of officers. Some he even trusted to know his real identity and they in return promised to keep it secret.

Whilst the hero work was rewarding it was also tiring for he still had to work during the day as well. Over time he figured he needed more help in order to get at least some respite from the role of a lone hero so when Striker invited him to join his Guardian Alliance Paul saw membership as a way of relieving some of his work load although he elected to become a reservist. This allowed him to have additional support in his hero duties without committing to the group full time.

However after Striker’s first mission ended in failure and he quit, Digitise asked Paul and Christina Nolan (Lady Luck, the other reserve member) to help continue the work.This meant a full time commitment but Paul “believed” in the idea of the Guardian Alliance so agreed to help evne though it meant he would have to work hard to keep down his day job as well. The trio then rebuilt it with new heroes and the name was changed to become the Phoenix Alliance.  His personal life then was rocked when his younger sister discovered she was also an Alpha Superior after her abilities had activated. Two Alphas in the same family with no previous members being Alphas was a rarity and like many recorded cases of siblings she developed similar gifts to his own.

Gemma wanted to join the Alliance but Paul was worried she would get hurt and tried a tough love approach and told her she was not good enough. He hoped that his words would put her off her decision but instead it made her angry. Always feeling she was a shadow to him whilst growing up because all the Smith males were “famous CLEA operatives.” Whilst Paul got all the attention from their father she had to fight for any recognition. Having seen the rift appear between their father and Paul she thought he would at least treat her differently but in dismissing her so casually she decided that if he thought she was not worthy enough then she was going to embarrass him.

She did this by joining a street gang but kept her Alpha abilities a secret. Exactly as she had planned she got Paul’s attention so after her actions as a hoodlum had gone on for several weeks in a bid to teach her a lesson Paul took into the local police station. Calling in a few favours with the officers he knew, Pauls asked them to put her in the cells overnight so she perhaps see where he eventual path might end up. The stunt was only supposed to shock Gemma into behaving herself but what followed turned both her world and that of Paul’s on its head.

As he had made aware to his friends knew she was an Alpha superior like him, Paul knew that under no circumstance could she be put through the EPD’s system and registered as a criminal. Though she had never used her Alpha abilities in her petty criminal activities as she had the potential to cause more harm than the average person then the penalties for Alpha criminals were always far worse. He therefore asked his friends that when they put her in the cell overnight and they made it look like she was in serious trouble that everything was kept off the records. This they agreed to do but Paul’s stunt backfired for a rookie officer, unaware of what was going on thought the paperwork had been neglected so he processed her along with other criminals being held in the cells that night.

The end result of this was that by the time Paul could collect her the next day she was already on the way to court to see a judge.  After hearing about Gemma and learning that she was an Alpha Superior the Judge decided she should be put on trial and despite Paul hiring the best lawyer by the time Gemma’s trial finished a couple of months later she was found guilty of all charges involving her petty criminal activities. She had chosen to plead not guilty so as she was an Alpha Superior the judge decided to give her a particularly harsh sentence and she was sent to prison for an unprecedented six years. This was three times longer than that of the same sentence given to first time offenders but the judge wanted to make an example of Gemma in order to make other Alpha Superiors think before taking on a life of crime.

For eighteen months Paul spent his time trying to appeal the sentence whilst at the same time acting as leader of the Phoenix Alliance. By this time Gemma refused to even acknowledge him because had he not had her arrested (stunt or otherwise) she would not be in prison.  He had just launched another appeal when he received word that the special prison facility had been attacked by members of Alpha Strike trying to retrieve some of the incarcerated members and in the resulting confusion Gemma had escaped as well and was now a wanted fugitive.

The next time she appeared she had taken on the codename of Slicer and was openly using her Alpha abilities to commit crime. Paul knew his sister had to be stopped but figured if anyone was going to stop her it had to be him so he stood down as leader of the Phoenix Alliance in order to find Gemma. Half a year passed as Paul tracked her as she jumped between various criminal groups. On the few occasions he had found her she had fought him savagely and because they had similar abilities he could not get past her defences as easily as other opponents. She therefore remained at large until she finally joined up with Chaos.

This he was only made aware of when Chaos attacked an office building and he saw her on television. Immediately he headed towards the scene and found to his relief that instead of becoming involved in the murder of innocent people she had chosen to turn against the group and was trying to help protect the defenceless workers. However before he could assist her, the building was blown up and she was buried under tons of rubble. Not long after this his old team the Phoenix Alliance arrived and together they forced Chaos to retreat. G-Whiz had received intel about Chaos preparing to attack a building and aware of Slicer’s ties to Paul, G-Whiz had decided the group should at least help one of its founder members.

Gemma was found to be alive and during her recovery in hospital Paul was finally able to reconcile with her. She still had to answer for her crimes so upon leaving hospital was arrested. When she next came to trial Paul again paid for her defence and due to mitigating circumstances was set free.
Having put most of their troubles behind them Paul and his sister now looked to the future. Having decided she wanted to use her gifts for good Gemma asked Paul to sponsor her membership in the Phoenix Alliance.

This he was glad to do as the Alliance had kept asking for his return but it meant she would have to move to Europa where the team was not based. By now he become quite adept at managing his life as a lone hero and since Gemma had similar gifts to him it looked an ideal compromise for everyone if she took his place on the team. A new start in a new city looked the best thing for her.

In time Pauls would take a trip over to Europa and return to the Alliance as a reservist but after discussing things with Gemma they decided that they should perhaps alternate the time they were active in the Alliance, this way they both could get a break when needed and the Alliance would not be doubling up on the same “skills”.