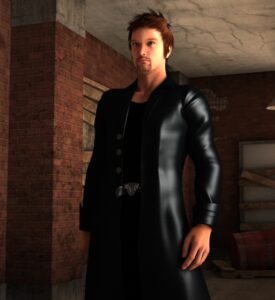 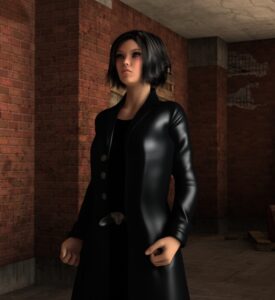 Able to assume any human form Doppelganger is the ultimate spy.

Ashley Thomas was once something of a mystery in that he walked the fine line between hero and anti hero. He first got noticed by CLEA when they became the only law enforcement agency to track him down and capture him. He was wanted for infiltrating numerous government agencies around the world and stealing intelligence. This put him firmly in the category of a criminal but when interviewed he explain his actions as uncovering corruption.

He had survived the purge by Black Shadow and with so many people killed by the criminal group having got people in the corridors of power, he took it upon himself to do the same, seek out corruption and destroy criminal groups from the inside.

Aware that he was a shape shifter he revealed that he was definitely male but admitted that the guise he had been captured as was not his real self and neither was the name he had supplied. That he made clear he would never reveal since he said he kept his true form and name a secret in order to protect his family.

The CLEA officers interviewing him suggested that Black Shadow was gone (this was in a time before the organisation reappeared) and therefore his fear was no excuse for spying on governments. However “Ashley” countered with the fact that there was still corruption and there were still people in power with links to criminal organisations. He then suggested instead of charging him it might be worthwhile that they let him go since he could be a valuable asset to those fighting for law and justice.

To the officer in charge of the questioning he was amazed when a message was handed down from the top to let him go. From then on Ashley was regarded as a “special asset” for the agency despite the fact that his actions at infiltrating other law enforcement agencies would cause trouble between them if they discovered Ashley was in CLEA’s employment.  Though “protected” by CLEA, Ashley did not exclusively surrender information to the agency as it has been noted he has passed on intel to other vigilante hero groups when he has learned that a serious crime was about to take place. During this period in time CLEA tried its best to get leverage on Thomas and learned his modus operandi.  They therefore had agents assigned to watch him around the clock.

Agents managed to discover that Thomas shadowed his intended victim for several weeks to learn mannerisms and likes and dislikes. This information was then used so when he swapped places with his target he did not make the mistake of acting out of character.

In the case of female targets he often wore his “default” male guise and likewise found that male targets were often more willing to reveal intel to a “sexy” female form. Once ready Thomas would then replace his target and begins gathering intel on the organisation he has infiltrated.

Sometimes agents noted that he would pose as operatives within a criminal group and once “inside” used his position to sabotage operations. The only problem he seemed to have with such groups was that if he was “discovered” the people he was trying to dupe would not think twice before killing him.  Occasionally he was noted to get out of sticky situation by employing a double bluff technique whereby he reveal the possibility of  a shape shifter in the criminal organisation which would often result in panic and confusion and get the heat off him.

Ironically it was not Thomas’s high risk games that resulted in him nearly getting killed on one occasion but the agents shadowing him. A lieutenant working for a crime boss by chance spotted them and chose to eradicate them. Though Thomas was angry about being shadowed he would not allow the two agents to be killed and so intervened.

After that “incident” Thomas decided that since CLEA were always going to shadow him then the only effective means of working freelance without interference was to join the agency, and so reluctantly he became a White Guardian.