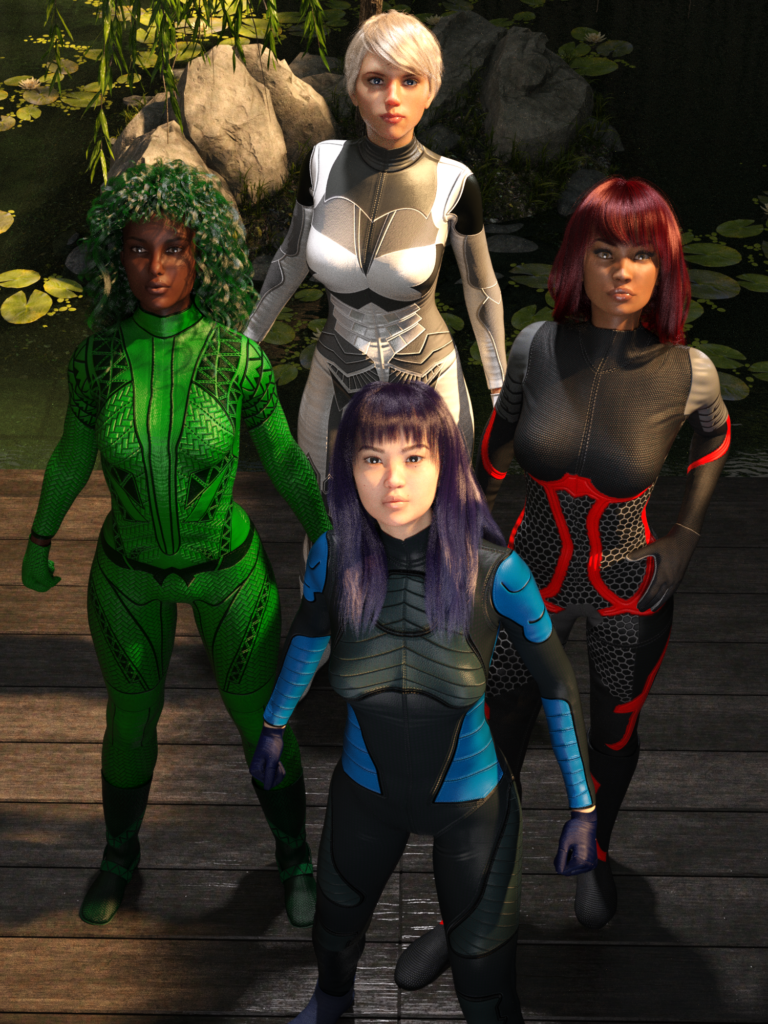 The Elemental Totems are amongst the top most powerful magical artefacts. Legends state that the Elementals as they were collectively known wreaked havoc for half a millennium before a rogue Angel decided to visit the mortal realm and put a stop to the death and destruction by extracting the  Totems from each of the hosts. One entity though could not hold onto the power  and before it consumed the Angel she hid them where she believed mortals would never find them. With a host the power could never be used.

However after many many centuries the wizard Harman, and last member of the Order of Watchers actually found the Totems. Unable to approach them or protect himself from the temptation of power, he got help from a witch called Irmina. Together they built a case with magical seals that could contain the power of all four Totems.

There was a problem though. The Warlock Council and Witches Coalition had learned of the discovery due to the fact Totems could sometimes “call” for new hosts. Both groups  wanted the power of the Elementals. Realising they could not run for ever Harman and Irmina decided the only way to prevent the Totems ending up on the side of evil was to give them to new hosts. In doing that the Totems would no longer call once bonded with a human. To stop the humans using the power they had been given afterwards they secretly planned to place all four hosts in magical stasis whilst they were bonding.

As an added precaution the decided to distribute the four Totems as far away from each other as possible. The Air Totem was given to  Astrid Haakonsson and as she bonded with it they sealed her in a glacier.  In Africa the gave the Earth Totem to  Ekene Ogodugo and when she was going through the bonding process they sealed her in artificial chasm below the ground. Next Chiyo Fukushima in Japan was given the Water Totem and they imprisoned her in an underwater cave. Lastly the pair travelled to South America and gave the final Fire Totem to Leonor Guerrero and buried her in a volcano. With the threat now contained Harman and Irmina placed themselves in a magical sleep, to be awakened in the event that any of the Elemental Totems became active.

Five hundred years past and a geological team visited the glacier in Norway and performed a series of ice bores, one of which by chance perforated the chamber where Astrid was “sleeping” awakening her from her slumber. Finding herself enclosed and now sure  where she was but pretty sure the wizard had something to do with it she decided to make her escape.

As the Air avatar she did not need to learn how to use her Totem for she was one with it so the use of magic was instinctive. Expanding the air in the chamber, she created a crack that expanded to an opening to the surface. Using air currents to support her she rose to the surface and saw a group of strangely dressed and startled people. They seemed to have gear and items that to her seemed like magic so she demanded they tell her where the wizard and witch were but they appeared dumbfounded.

Since they could not help she chose to leave and find someone who could tell her where the pair that imprisoned her were hiding. She knew from her Totem that the pair had placed a spell on it to alert them of the fact she had escaped but they were nowhere to be found. Flying over modern cities she quickly discovered that time had moved on and after finding out how long she had been trapped Astrid was getting angry. There was a chance that the target of her wrath was actually dead after all this time but she did not beleive it as the spell would not ordinarily have activated in that instance.

Though she thought that she could defeat them alone, Astrid considered that if she had been trapped then the others she could “feel” were also trapped. The Totems were linked so she knew there were others like her. Using those feelings she was able to home in on them and in time freed, Ekene, the Chiyo and lastly Leonor. Once they learned how they had been treated, all four Elementals had the same desire for revenge.

Their appearance though had been noticed and heroes had come to investigate the quartet. Not sure if the people chasing them were friend or foe led to them lashing out. Their combined power was devastating but they did not kill those that had come after them for they were more interested in Harman and Irmina.

Growing in anger they eventually decided to force their jailers to come to them and started attacking the Europa mega city, raining down destruction. Harman and Irmina then found them and at last the quartet would get their revenge. Harman and Irmina put up a good but futile fight. Before they finished Harman off he apologised and begged for mercy explaining that he had locked them away to prevent their power being used by evil. He also asked them to stop hurting innocent people for they were not the ones responsible for imprisoning them.

The statement struck a chord with the group and for they first time they took a good look at the devastation they had caused. When Harman told them they were once good people and he had not wanted their power in the hands of evil, they realised in seeking revenge they had played into the hands of evil. Though still angry the Elementals agreed to stop and let Harman and Irmina leave.

Now in a world they did not understand and having made the people think they were enemies the Elementals had both a hard time in trying to learn what they had missed and put their past behind them. They then chose to use their magic for good but it would take the people a long time to learn to trust such powerful entities that once tried to decimate a city. Through perseverance they succeeded, and have become members of a rather small group of people who have been displaced from time.