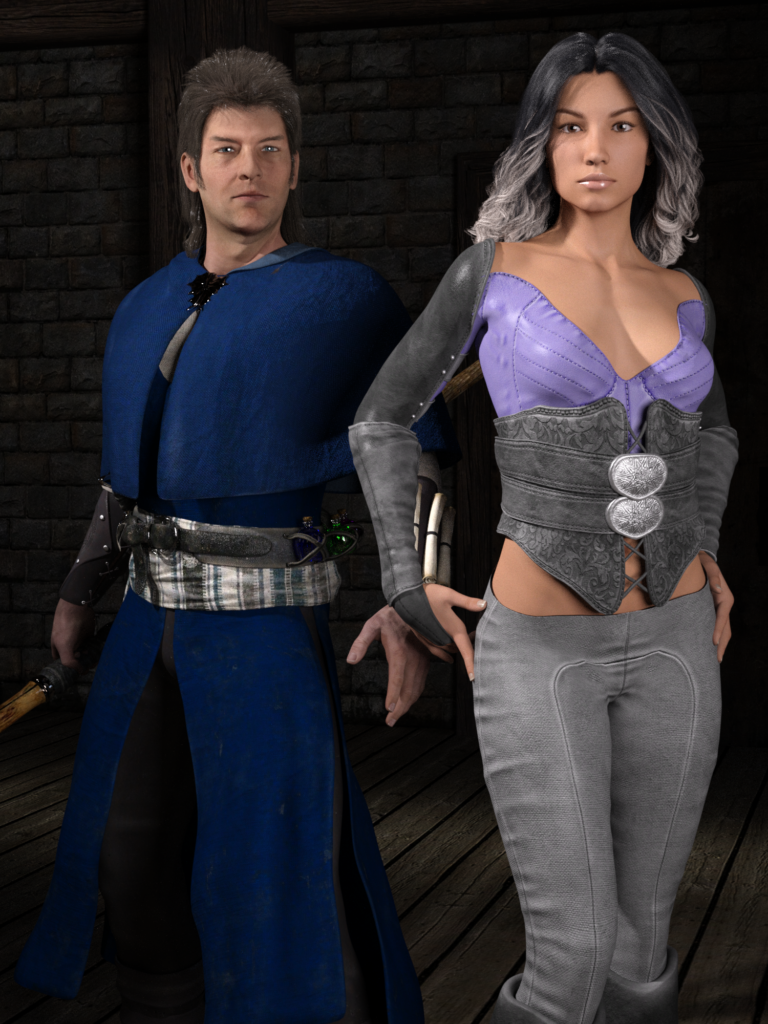 Despite his looks Harman is in fact an eighteenth century wizard

In his youth he was an extremely powerful wizard and along with several others (including Irmina) had combined magic helped several Great Beasts adopt human forms thus allowing most of the Legendary Creatures and Darklings to hibernate whilst others called watchers walked amongst humans, waiting for the time to awaken their respective races, when either mankind was not a threat or had wiped itself out. In return for helping the Great Beasts, those involved in the task were rewarded with natural magic that would give them great longevity, but not immortality.

Later in life he decided to join the Order of Observers (not to be confused with the Watchers who are human form Great Beasts). The Orders were a specialist group of mystics who specialised in maintaining the balance between good and evil. Though most people would think a world without evil would be good, the Observers perceive that without evil being present then people would no longer progress since without struggle there can be no progress. Likewise if there was too much evil then death and destruction would end the human race, therefore a balance was needed.

The most dangerous threat to the balance between good and evil was Magical Items ending up in the wrong hands and the most dangerous of there were Avatar Totems. Over the centuries the Observers had managed to try to adjust fate so the “correct” people ended up with Avatar Totems and if they were too powerful then they had ways and means to divide the power of an Avatar Totem, albeit that usually involved sacrifice. Over time such acts whittled down the order until only a few remained.

The last of them known to have done this was  Burkhard Morgade and after he vanished it signalled the end of the line for only Harman remained and trying to recruit others had been to no avail. Knowing that when he was gone there would be nobody to continue his work, Harman decided that before he passed he would do the world a final favour and track down a “lost” set of Avatar Totems known as the Elementals.

As an Observer he had spent all his life trying to find the four Totems without any luck. What did not help matters was that there were no historic records, only stories. Legend had it that for five hundred years the Totems had caused all sorts of problems due to the fact they were actually linked to each other. Other Avatars did have similar links but the Elementals controlled Air, Water, Fire and Earth and the destruction they could create was immense so a rogue Angel decided to visit the mortal realm and sacrifice herself to separate all four Totems from their human hosts. Such an act would lead to her death since even an Angel could not control all the power but the legends stated that before she succumbed she buried the Elemental Totems.

After decades of looking for them, Harman came across a passage in an old manuscript that he believed gave him the location of their hiding place, and he got lucky when he found them in a cave in Germany. As soon as he approached the Totems he felt their power and was forced to retreat before he became tempted to bond with them.

Realising that in exposing them the the Avatars would attract a new host, he knew that he had to move quickly. Unable to avoid the temptation if he got too close, he reunited with Irmina Boerch. She was a powerful with that specialised in Dark Magic. However she only used her gifts for good itent and having “worked” with her before Harman knew he could trust her. Returning to the cave they constructed a magical container that would isolate the Totems from themselves and thus avoid temptation. However he was by now aware that both the Warlock Council and the Witches Coalition had become aware of the discovery.

Knowing if either group got the Totems then the world could be in jeopardy as evil would have unimaginable power, Harman and Irmina decided that they could not run with them so the only way to stop the power falling into the wrong hands was to give it to new hosts. However there was a chance that such hosts would not be much better than the Coalition or Council. Irmina therefore suggested that the best course of action would be to find a host for each Totem in turn but as soon as they started bonding with the Totem they should place them in a magical sleep. By doing that, the bonding process would stop the Avatars “calling” for a new hosts and thus the Council and Coalition would not be able to find them, and by placing the hosts in a magical sleep they would not be able to use the power either.

The pair did this and though they knew they were duping the hosts into receiving great power, only for them to be imprisoned in a deep sleep, Harman and Irmina felt they had no choice. For greater protection the pair spread the Totems as far as possible around the world and one the last host was asleep Harman and Irmina decided to add a last line of defence. They linked their magic via a tracer spell and then put themselves in a magical stasis that could only be broken when one of the Elemental Totems went active.

They slept for five hundred years before a team performing geological drills in a Norwegian Glacier awoke the Air Elemental. After escaping the tracer spell went active. It awakened Harman and Irmina but at the same time due to the link it alerted the Elemental. She by then was already looking for them and in the process was also waking the other Elementals. Though the world was nothing the recognised they were more interested in revenge.

Of course Harman and Irmina were also awakened when the  Air Elemental was disturbed and it was  very easy for them to find the Elementals due to the destruction they were causing.  Though the pair stood little chance against the combined forces of the Elementals they tried anyway and were nearly annihilated until Harman apologised and appealed to the human side of them. Pointing out that they were once good people which is why they were chosen as hosts he begged them to stop hurting innocent people and making them pay for his choices.

Amazingly the Elementals backed down and accepted the apology and agreed in future to use their great power for good but also warned him that if he ever tried to turn on them in future he would not walk away the next time.

With the threat over, Harman and Irmina now had a whole new world to try and understand and find a way to fit in. Though time had moved on there were still magical threats to contend with so they were not without purpose . Finding a “job” was interesting but the pair used what they had to their advantage and became eighteenth century history teachers.