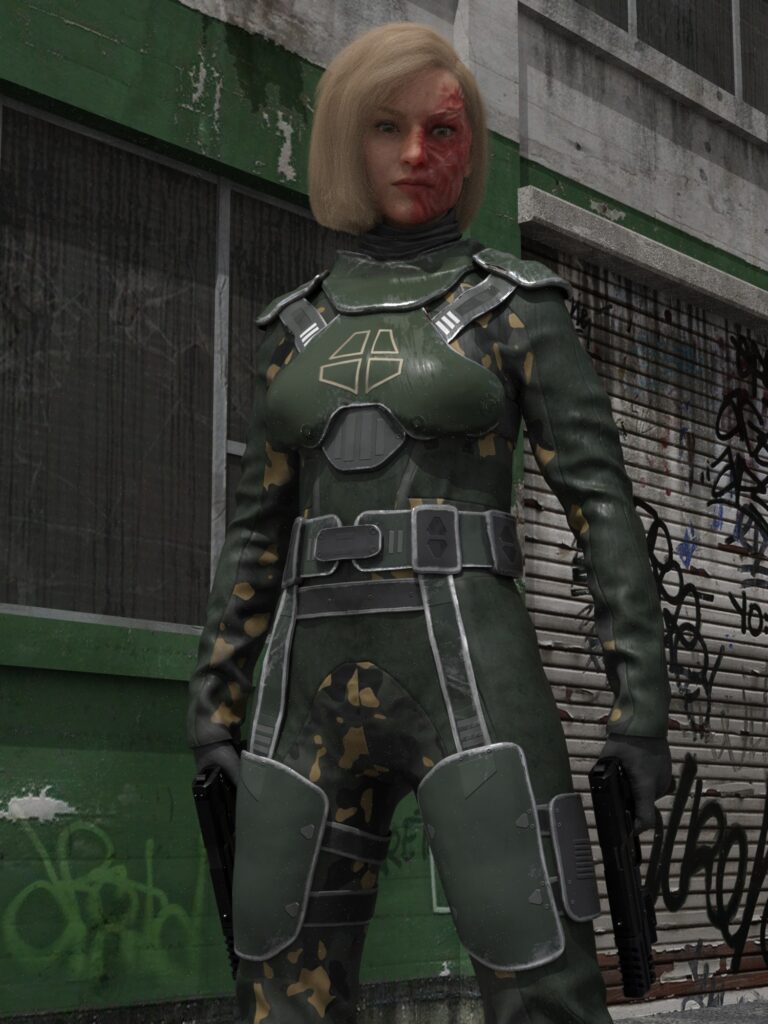 Catherine Wilde is one of the rare exceptions of a hero gone bad. Unlike most Alphas she was aware that she as an Alpha Inferior from an early age. In the time when Black Shadow were active and Alphas were vanishing without a trace, her parents worked hard to keep Catherine’s status as an Alpha Inferior a secret and so the family acted like everything was normal.

This was difficult since both parents had seen action as teenagers during the first “generation” of Alpha Heroes. This was how they had met and like many that were not killed by the Black Shadow crime syndicate they had simply retired from the hero business and gone into hiding. Things changed with the arrival of Zodiac and the collapse of Black Shadow. No longer needing to hide, Catherine’s parents elected to remain retired but prepared their daughter in case she changed to an Alpha Superior. Having heard all about her parents “adventures”, Catherine quite like the idea of being an Alpha Hero as it would mean she could not only carry on the family legacy but also emulate some of the fictional character she used to read about in comics.

Catherine was warned that she might never become an Alpha Superior and so as she passed from her teenage years into her young adult years her dream faded. She concentrated on getting a career and joining in the rat race along with everyone else.

Then when she was twenty-two everything changed in her life for she began experiencing the “warning signs” that she was changing from an Alpha Inferior to an Alpha Superior. By the time the transition was complete Catherine had gained an Alpha ability that allowed her to simply shut off her emotional responses. This had perhaps not been what she had wanted years ago when she imagined herself becoming an Alpha Hero. Flying or having super strength was more what she was after but fate seemed to have different ideas.

Despite her obvious disappointment, Catherine decided she would find a way to use her unusual ability. Whilst working on that puzzle she worked on getting herself fit and took various classes in martial arts. It was during one such lesson which involved a “friendly” match between her and a more advanced student that she noticed she kept losing because she was being intimidated. As an experiment she activated her Alpha abilities and then the intimidation had no effect. She could analyse tactics and remain perfectly calm and it was then she was able to take control of the match. That was when Catherine realised the value in her Alpha ability.

Having found a way to capitalise on what she saw as a useless gift, Catherine now decided to devote her spare time to becoming a costumed adventurer. No matter how many muggers or petty criminals she came across, so long as she had superior fight skills there was nothing they could do to break her flow during the course of an “altercation”. Eventually the local press coined the name “Fearless” to describe the mysterious vigilante woman that was wreaking havoc with local hoodlums.

Eventually her exploits would see her encounter other Alpha heroes and after assisting the Phoenix Alliance during a battle with the Drone Lords, she asked the Alliance leader, G-Wiz if they could use her skills. G-Wiz agreed to a trial as he normally recruited people he or the team had already considered had potential and not those that simply asked. Having seemingly reached the big time as far as amateur crime fighting was concerned, this was when Catherine’s ambition would get the better of her.

She was part of a team that had gone to investigate a suspected bomber that was supposedly holed up inside a warehouse. Whilst the others took precautions of scouting out the area, Catherine, against the instructions given to her chose simply to activate her Alpha abilities and go straight in. She mistook the caution of the others for fear and believed she could prove her worth by capturing the bomber alone.

As soon as she entered the building, she failed to see a remote trigger and the building exploded. By the time the others pulled her out she had been burnt quite badly. She might not have been able to experience fear at the time but she certainly experienced pain, and a lot of it.

Months of treatment followed but even with plastic surgery part of her face was permanently scarred. During her recovery whenever she allowed herself to feel emotions, all she felt was anger and that anger was aimed at the Phoenix Alliance. Her mind was warped with desire for revenge at having been disfigured. She felt the others had let her down and would not accept that her initial impatience had been the cause of all her pain.

By the time she had left hospital her burnt face was a reminder of a failed dream. At first she tried shutting out her emotions by using her Alpha ability but as soon as she had to revert to normal the anger returned. Eventually her self-loathing placed Catherine on a path where she believed that Alpha Heroes were every bit as dangerous to the general public as the enemies they fought. She now felt it was her responsibility to put a stop to their activities but part of her would not allow herself to attack or kill Alpha heroes. Instead she decided to offer her services to the Protectorate and since they wanted to rid the streets of “dangerous” Alphas they were only too willing to accept her services.